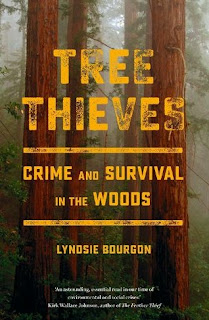 Forests are one of the world's most important biological reserves. They suck about a third of humanity's carbon emissions out of the atmosphere each year. According to the United Nations, forests also "contain 60,000 different tree species, 80 percent of amphibian species, 75 percent of bird species, and 68 percent of the world's mammal species." Despite this importance, tree cover is being lost at an alarming rate, and as Lyndsie Bourgon's new book details, significant damage to our forests comes from the illegal trade in wood, driven by the poaching of trees.

This illegal trade is big business. Bourgon tells us that according to the World Bank, "the global scale of illegal logging generates something between $51 billion and $157 billion annually". Staggeringly, "thirty percent of the world's wood trade is illegal". There's a very good chance that some of the wood in your house comes from trees that were illegally chopped down, very often from protected areas or endangered species.

Bourgon's book is a study of this trade and the fight against the poachers. But what makes her book so important is that she starts from the poachers themselves. She does this by asking two related questions - "how can a tree be stolen?" and "why would someone steal one?" The first question sets up the second. Trees can only be stolen when forests are commodified.

With the development of capitalism, there was a transformation of how humanity related to the natural world. As Karl Marx put it in his notes now known as the Grundrisse:

for the first time, nature becomes purely an object for humankind, purely a matter of utility; ceases to be recognized as a power for itself; and the theoretical discovery of its autonomous laws appears merely as a ruse so as to subjugate it under human needs, whether as an object of consumption or as a means of production.

Capital transforms nature, and over time, seeks to destroy those societies that retain a different approach to the natural world. The first settlers in the Americas often wrote home extolling the virtues of the landscape in terms that appear to us as a shopping list, which in effect they were. A celebration of the natural wealth of the new continent for those at home that could profit from it. Here is Martin Pring writing in 1603 about Martha's Vineyard:

As for Trees the Country yeeldeth Sassafras a plant of sovereigne vertue for the French Pox, and as    some of late have learnedly written good against the Plague and many other Maladies; Vines, Cedars, Okes, Ashes, Beeches, birch trees, Cherie trees bearing fruit whereof we did eat; Hasels, Witchhasels, the best wood of all other to make Sope-ashes withall; walnut trees, Maples, holy to make Bird lime with and a kinde of tree bearing a fruit like a small red Peare-plum.

Bourgon's book shows how trees were a particular part of this process. A tree can only be stolen once it has been accorded a value and turned into a commodity, but it also can only be stolen when there is a need to steal it. The invention of poaching as a crime made the natural usage of trees (or their fallen branches and fruits) illegal. It was a process contested by those that relied on these benefits - as Marx himself saw when he campaigned against the criminality of wood theft in 1842.

Bourgon agrees. She writes that "People have 'taken' wood for centuries, but wood has also been taken from us". But she adds an important insight, crucial to understanding what is taking place today:

Why might someone steal a tree? For money, yes. But also for a sense of control, for family, for ownership, for products that you and I have in our homes, for drugs. I have begun to see the act of timber poaching as not simply a dramatic environmental crime, but something deeper - an act to reclaim one's place in a rapidly changing world, a deed of necessity.

Her focus is on the forests of massive Redwoods in North Western America and Canada. Here she looks at the development of a huge industry based on the destruction of forests to create timber. A massively profitable industry which saw the development of wealthy lumber towns. The industry itself was based on the dispossession of the original indigenous forest communities - and one that was promethean in its approach. One joke made at the time was that there were always more trees over the hill to cut down.

That is, of course, not true and alongside the deforestation there grew a movement to protect the trees. Bourgon makes the point that this movement itself was relatively reactionary, basing itself on the notion that "pristine" nature needed to be protected, and erasing the pre-European communities from history. But the movement was successful, creating areas of space that had to be protected and could not be used by its inhabitants in ways that had become customary. It was a process that eerily echoed the enclosure and privatisation of land in Europe, a process whereby, "hunting became poaching. Foraging and grazing became trespassing. Logging became timber theft." As Bourgon points out, many families could now only survive by breaking the law, and so, the act of protecting forests turn the trees themselves into sites for class struggle.

Bourgon explores her thesis by examining the history of Orick, a former lumber town in California. Here she interviews poachers and discusses their history. How their fathers and grandfathers worked in the lumber industry, with highly skilled jobs that were taken from them as the industry shut down. The environmental movement played no small part in this process as the creation of National Parks drove the industry elsewhere. But for some, poaching remains a way of living, and fighting the establishment. Bourgon shows how the tourist wood industry is closely linked to the illegal economy and she discusses the battle by the authorities to stop the poaching, but of greatest interest are the poachers themselves.

These were men who were told that the end of the lumber industry would lead to them having jobs in tourism. These jobs never materialised. But nor did the sort of struggle that could have won them compensation and decent jobs as well as the confidence in themselves as people. Bourgon notes the lack of "class politics" by the environmental movement which meant that they cut themselves off from the workers who could have been their allies. She quotes labour historian Erik Lommis who notes that the process of struggle "undermined potential allegiances" between activists and workers.

It is a crucial lesson for the environmental movement today. We might say "leave the oil in the ground" but unless we can articulate a viable alternative for the workers, they'll may well end up our enemies. Something the oil industry, like the Californian lumber industry, understood all too well.

Thus the poaching of wood is far more than a way of getting some cash, though it is that. It is a way of fighting the system that decimated your community and forgot you and your family. The destruction of the logging industry saw communities lose "the central meaning of their lives". Bourgon points out that this means for Orick and other towns, "the result is a form of community trauma deeply felt in many rural areas: intergenerational poverty, long-term unemployment, degraded environments, disconnected social relationships and destructive social norms."

Poaching then, is an act of desperation combined with one of undirected rage against a system that has failed the person who is committing the theft. It has its historical parallels with those English rural activists that maimed animals in revenge against those who had dispossessed them from their lands, or those that burnt hay ricks in protest at lost jobs. While we can understand the motivations, we also have to recognise that there is an element of nihilism too. As one poacher says, "they won't have any trees left... I got a saw over there that'll cut down any trees they got".

Bourgon's book then is an insight into the poaching industry from the bottom up. We shouldn't celebrate the poachers though as modern day Robin Hoods, but we can understand them as victims of a system who were failed by the environmental and trade union movements.

Having taken this approach, Bourgon doesn't neglect the wider economies and politics of poaching, in several chapters she looks at wood theft and the industry globally, seeking to generalise from the California experience. We see how the investigative processes developed in North America have led to remarkable technologies that can help prosecute and identify the illegal timber trade. But it is clear that this is not enough to stop a business that is remarkably lucrative, and begins with small groups of poachers far from urban areas that are impossible to police. But there is another problem - the timber business is so profitable and destructive to the environment precisely because it arises in a system of generalised commodity production, where nature itself has become part of the profit machine. Saving the trees means challenging that system and that means bringing together the environmental and workers' movement.

Lyndsie Bourgon's book then is a remarkable insight into an aspect of environmental politics that few activists even know exists. It is particularly insightful because it begins with those at the bottom of the system, who have been failed by a system that puts profits before people and planet. As such its extremely informative and enlightening. It is also an excellent read that I highly recommend.

Jackson - The Thief at the End of the World, Rubber, Empire and the obsessions of Henry Wickham
Dawson - Extinction: A Radical History
Archer - 'By a Flash and a Scare': Arson, Animal Maiming & Poaching in East Anglia: 1815-1870
Reed & Wells – Class, Conflict & Protest in the English Countryside 1700-1880
Hay, Linebaugh, Rule, Thompson & Winslow - Albion's Fatal Tree: Crime and Society in Eighteenth Century England
Horn - Life and Labour in Rural England 1760-1850
Rackham - Trees and Woodland in the British Landscape

Posted by Resolute Reader at 9:57 pm