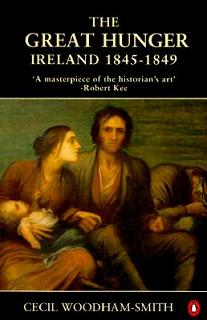 The Irish Potato Famine of 1845-9 probably resulted in 1.5 million deaths. A further million people fled the country looking for food and work. It's legacy, for millions of people in the Irish diaspora was a hatred of the British ruling class.

The potato blight that destroyed repeated crops was a purely natural phenomena. The starvation that followed however was entirely man made, and a direct result of racist, colonial attitudes of government in London. In addition, ministers were more interested in the profits of food merchants than the relief of the poor.

Cecil Woodham-Smith's social history of the period and of Ireland before and after the famine is a detailed extensive history of this sad period. She points fingers clearly, particularly at those ministers who would do nothing to provide assistance, seeing the Irish as a source of trouble, rather than people to help. "Would to God the Government would send us food instead of soldiers" lamented a starving citizen in County Mayo as soldiers arrived in the region.

Sir Charles Trevelyan, who oversaw relief efforts (such as they were) during the famine, had little but contempt for the Irish... "The Great evil with which we have to contend, is not the physical evil of the famine, but the moral evil of the selfish, perverse and turbulent character of the people." For Trevelyan, the greatest problem was that famine relief might upset the profits of merchants and undermine free trade.

Particularly during 1847, Ireland continued to export grain, which that year was a bumper harvest. The population had no money and no employment, and the grain crop was exported to pay rent. Speculators and landlords amassed huge profits - indeed Trevelyan saw opportunity for profit in the famine, rather than horror. At one point he ended relief completely as economic downturn arrived, saying that he would "leave the rest to God."

The author documents the few attempts at resistance - but the population was too exhausted and hungry to mount any serious attempts at rebellion or insurrection, and she shows how "the Irish people starved and died in one world, the landowning classes inhabited another."

First published in 1962 this book is a valuable read for anyone who thinks that there is something natural about natural disaster. It is a grim reminder that the rich and powerful care little for the poorest of the poor.