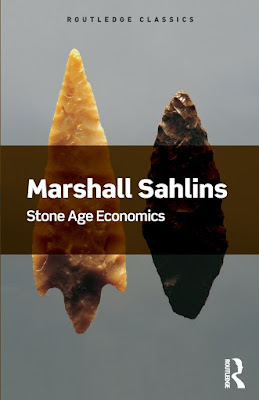 First published in 1974, Marshall Sahlins' Stone Age Economics remains a touchstone for modern anthropology. While in places it is dated - Sahlins uses language like "primitive" to refer to pre-class societies in history and in contemporary times - and sections of it are very difficult for the non-expert, I still found the book interesting and relevant.

Sahlins book tackles an argument that remains common-place today. The standard view of hunter and gatherer societies is that they were hard and difficult. As the author explains:

Almost universally committed to the proposition that life was hard in the palaeolithic, our textbooks compete to convey a sense of impending doom, leaving one to wonder not only how hunters managed to live, but whether, after all, this was living? The spectre of starvation stalks the stalker through these pages. His technical incompetence is said to enjoin continuous work just to survive, affording him neither respite nor surplus, hence not even the "leisure" to "build culture".

It's an argument that is rooted in the view that only modern, capitalist economies, can provide the commodities and lifestyles to give people happy, decent, long lives. It is also, as Stone Age Economics is dedicated to showing, entirely false. As Sahlins explains:

A good case can be made that hunters and gatherers work less than we do; and, rather than a continuous travail, the food quest is intermittent, leisure abundant, and there is a greater amount of sleep in the daytime per capita per year than in any other condition of society.

For workers who are working harder and longer than they were 10, 20 or 30 years ago, some of the accounts in Stone Age Economics might bring a wry smile. Take one study of aboriginal people in Arnhem Land, Australia. The average length of time each person put into the finding and preparation of food was four or five hours a day. Sahlins notes (about the Bushmen of southern Africa) that their food collecting was "more efficient [in ratio of provider to supported population] than French farming in the period up to World War II). In summary, Sahlins writes that "hunters and gatherers of the ethnological present... suggest a mean of three to five hours per adult worker per day in food production". Notably, he points out, less than unionised industrial workers at the time - bankers hours as he jokingly summarises. These figures are even more favourable than early agriculturalists.

But it is not just in terms of time "working" that these studies are interesting. Sahlins' overview of dozens of studies of hunter-gatherer communities around the world shows that they often could have produced more food than they did. In other words, motivation is not about getting a surplus, or controlling it. Rather people were driven by the desire to feed family and community - not obtain resources, food or commodities for the sake of it.

In an interesting critique of those who argue that communities will ruthlessly exploit natural resources for personal gain, to the disadvantage of all, Sahlins quotes anthropologist Joseph Spencer [1966] on early shifting agriculture:

Light areal density patterns of population are naturally associated with many groups following shifting cultivation because of their intrinsic social system... This cultural tradition cannot be interpreted in terms of the carrying capacity of the land, so that the social phenomenon, rather than the literal carrying capacity of the land itself has assumed the dynamic role of controlling population density.

Indeed Sahlins emphasises (49) that "archaic economies" do not have a tendency towards overpopulation, and it is society itself that shapes things like population size.

This is not to say that all these societies are perfect. Sahlins' summary of anthropological surveys shows that at times of stress (natural disaster, famine) the social relations that prevent theft or encourage sharing and gift giving  can break down. But these are the exceptions and the studies indicate that it is on the rare occasion of external shock that this happens and that communities tend to organise to avoid such outcomes where they can. Nor is everyone necessarily equal in how they provide for the wider group. Some people can hunt, others aren't very good. Some have other talents. What matters is that the system evens itself out. There is fascinating material here on the division of labour between men and women in pre-class hunter-gatherer and early agricultural societies. Women's oppression is not a thing in these societies.

Readers will be fascinated by the glimpses of other social organisation that are so different to our working lives under capitalism. In particular I liked the emphasis on rest as part of life. But what Sahlins emphasises time and again is how social relations are utterly different. We cannot understand hunter-gatherer communities by looking at them through the lens of contemporary economic thought. For instance, take Sahlins focus on the "Domestic Mode of Production". Here he concludes:

For the domestic groups of primitive society have not yet suffered demotion to a mere consumption statues, their labour power detached from the familial circle and, employed in an external realm, made subject to an alien organisation and purpose. The household is as such charged with production, with the deployment and use of labour power, with the determination of the economic objective. Its own inner relations as between husband and wife, parent and child, are the principal relations of production in society.... How labour is to be expended, the terms and products of its activity, are in the main domestic decisions. And these decisions are taken primarily with a view toward domestic contentment. Production is geared to the family's customary requirements. Production is for the benefit of the producers.

The latter half of the book tries to unpick some of the realities of how such societies work - the question of obligations that arise out of gift giving is a big issue. Sahlins breaks down how trade between groups, which have gift giving at their heart, leads to the establishment of what we might call rates of exchange. A pot for two spears. These might vary from place to place (more pots for spears, closer to their centre of production). But the rate gets established on the basis (Sahlins argues) that people offer more than their worth. Trade in these contexts was not about profit, but creating relations that benefit all.

Sahlins says you cannot understand exchange "in its material terms apart from its social terms." A Bushman put it better, "The worse thing is not giving presents. If people do not like each other but one gives a gift and the other must accept, this brings a peace between them. We give what we have. That is the way we live together".

This was even true of the rise of early social differences. Big men might be chiefs. But they did not garner vast wealth for themselves. Gifts from their people enabled the display of largesse, or the building of public works, or support for those without. "To be stingy is to sink in public esteem" said one scientist of the Manus. "Meanness, indeed, is the most despised vice, and the only thing about which the natives have strong moral views" said another of the Trobriand.

Such relations are alien to the capitalist mindset. Or rather the mindset that develops under capitalism. But they are also alien to the way that society organises and individuals relate to each other under capitalism too. For instance the way that people share without grumble, help each other and donate to the common pot in order that everyone can benefit simply does not happen in a society were we are atomised and forced to compete at every level. Those who claim that human nature means we cannot work collectively for the common good are proved wrong by Sahlins' work which proves that for most of humanity's history (and indeed for communities that continued into contemporary times) the opposite was true.

While in places this book is difficult and readers without detailed knowledge of the source material might find his references unclear, this remains both a classic work of anthropology and a deeply important book about ourselves.

Lee - The !Kung San: Men, Women & Work in a Foraging Society
Leacock - Myths of Male Dominance
Bellwood - The First Farmers
Martin - The Death of Big Men and the Rise of the Big Shots
Flannery and Marcus - The Creation of Inequality
McAnany and Yoffee - Questioning Collapse
Scott - Against the Grain

Posted by Resolute Reader at 7:57 pm