Frank Henderson - Life on the Track; Memoirs of a socialist worker

Since I heard it was going to be published, I've desperately be waiting for Frank Henderson's auto-biography to be published. For those who've never met him, or heard him speak, Frank is a retiring character - for someone whose life has been as full as his, he doesn't seem to be someone who has spent his life in struggle.

Born in 1925 to a Trade Union family in the West Midlands, Frank was old enough to serve in the later days of the Second World War, and be part of the British forces that put down rebellion in Greece and Palestine in the war's aftermath. But for most of his life, Frank was a socialist militant working in the car industry "on the track". Much of this time was spent working in the Longbridge plant. That giant car factory that dominated so much of working class life for the people of Birmingham for many years. Frank describes a time when Trade Union organisation was so powerful it seems almost impossible today.

Working in car industry in the 1960s, a period of boom for the UK companies, Trade Unionists had effectively controlled production. If the workers didn't like something, the profits stopped until management had solved the problem. Even before and during the war the union movement had great power. Frank describes being 15 and being asked to do the job of a 16 year old. Despite his manager wanting this done, the union Branch Committee had to make a ruling. Their ruling was that Frank could do the work, but only if management paid him the adult rate - twice what he was on. Management accepted the decision.

Trade Union politics for much of Frank's life were dominated by the politics of the Communist Party. Frank never joined the CP - instead his political life followed the ups and downs of the British Trotskyist movement, though eventually he joined the International Socialists, forerunners of the current Socialist Workers Party in the UK.

Frank sees being in a socialist organisation as crucial to his activity. Describing the aftermath of the Birmingham Pub Bombings at Longbridge he says he had "never been so scared in his life". In the anti-Irish lynch mob atmosphere that followed the IRA attacks, Frank had to speak out.

While the meeting voted to go on a planned protest march, Frank thinks that he made a small different to the atmosphere.

"I noticed, possibly as a result of what I'd said, that a lot of banners saying "Sack all the Irish bastards", "Kill the Irish Bastards", and slogans like that were chucked on the floor and people were walking over them. From the end where I'd spoke people were carrying banners saying, "Bring our boys home". Now, "Bring our boys home" is a long way from a slogan like "Troops out now", but it's a bigger distance from "Hang all Irish bastards".

Frank doesn't think that he could have done what he did without being a member of the IS, "giving him a bit of backbone when things are tough." I think he is right to feel proud when he goes on to say;

"I felt, possibly for the first time in my life, a little pride in myself for doing something. It was a lesson in the value of being a party member that has stuck with me ever since."

Frank saw it all. From the Battle of Satley Gates and the miners strikes that destroyed the Tory governments of the early 1970s, to the 1984 miners strike, Thatcher's victory and the defeat of the Trade Union movement. His thoughts on the role of rank and file movements to give confidence to genuine shop stewards networks, the role of the Communist Party in undermining the left, as well as militancy in a time of economic downturn are particularly interesting and relevant.

If you're interested in Oral history and the working class movement of the last 60 years, this is an excellent read. It finishes with a afterword by Marxist historian Matt Perry who goes through some of the detail of the period, in particular the reasons behind the decline of British manufacturing industry.

Bookmarks have done a great service to a new generation of political activists by bringing out this book. It will help them understand the importance of workplace organisation and socialist politics. There could be no greater tribute to the life of a socialist than being able to learn the lessons from him or her and Frank Henderson certainly has much to teach us.
Posted by Resolute Reader at 4:26 pm 1 comment:

If you want to know more about the book, you might like to read the interview that Iain M. Banks gave to Socialist Review when it was first published, it gives more information on the ideas behind its development. SR's own review is here.
Posted by Resolute Reader at 7:53 pm No comments: 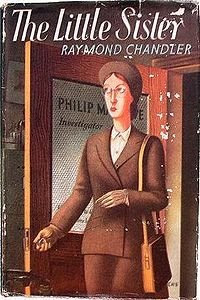 The Little Sister is not one of Raymond Chandlers better known novels. It is however one of the classic Phillip Marlowe novels and has all the hall marks of the better known stories like "The Long Goodbye" and "The Lady in the Lake".

It begins with Marlowe, bored in his office, chasing the flies that are annoying him. His boredom is disturbed when the oddly named Orfamy Quest visits, looking for a private detective to help her find her missing brother. Orfamy comes from a tiny town in Kansas and holds all the prejudices that you might imagine for someone visiting the big city, with all its vices, for the first time.

The plot itself matters little - Chandler's novels should be read for their atmosphere and description, rather than the complex tales of intrigue and betrayal. This is the sort of story that you just join up to for the ride. On this trip, we follow Marlowe as he meets sex-starved movie starlets, murder victims with ice-picks in their necks and corrupt policemen, as well as nasty gangsters. In some ways, all the cliches are here, in others it's a fabulous example of the detective genre.

Chandler is an amazing writer, whose cynicism towards the inhabitants of the big city will bring many a dry smile to the modern reader. Worth digging this one out from the library.

Chandler - The Long Goodbye
Posted by Resolute Reader at 10:34 am 2 comments: