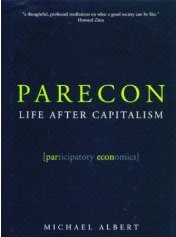 For all revolutionaries, being able to imagine a future society is very important. This isn't simply because we need to have something to struggle for, but because we have to be able to show that an alternative is possible. If a new form of society does not work on an intellectual level, who will be prepared to join the battle to create it?

In this regard, Michael Albert's book is tremendously important. It is, in effect, a blueprint for how a non-capitalist society might work. Albert doesn't of course believe that every aspect of his imagined world will be created in the way it is described here, but he has constructed it to prove that it isn't impossible to organise society differently.

Albert starts by showing how life under capitalism is one that is distorted by the nature of society. The blind competition between capitalists in the search for profit is what drives production. Hence production isn't for the rational needs of society, rather it is for the needs of the capitalists - profits in short. This means that the lives of the people who do the work are limited. Limited to the type of jobs the capitalists need, limited to the type of work that is needed - often boring, rote work with little reward or social recognition.

Albert's Parecon (Participatory Economics) then is a world where production is for need - where locally, regionally, nationally and internationally, those who create the wealth in society get together to discuss, debate and decide what is made, why and how. In Parecon, everyone has the widest possible access to the information about what is made and what goes into it. We can imagine a huge networked database showing every product, with information about it's manufacture - how long it takes, what raw materials are needed and who makes it.

From this information, participants in this new society are able to make genuine informed choices about what they consume, and what their workplace would be like.

Albert also discusses how the false divisions of work under capitalism should break down. Why should a brain surgeon be rewarded more than a road sweeper? Why should someone who helps keep the city clean and running, not have access to the choices and things that a medical worker has? In Albert's imagined world such distinctions would break down. Men and women would have more opportunities, and those who do more rote work might even have greater rewards in terms of access to goods.

Not all of Albert's world is one I necessarily agree with. What is most important is the way he describes how such a world could function. How a planned economy could work, how such a society would be sustainable in a way that capitalism never can be.

I feel there is a huge missing chunk though. Nowhere does Albert grapple with the thorny question of "how do we get there?". It's fine to imagine the future. But such fantasies should at least feel real, because we can imagine how they are brought into life.

For Marxists, the revolutionary transformation of society is not simply about destroying capitalism. It is important because only through such a transformation do men and women throw off the "much of ages". Through the collective struggle, individualism breaks down and collective action becomes the norm. Racist and sexist attitudes are challenged. Workers create the organs that become the basis for a functioning Parecon.

I suspect that many who read Parecon will think it new and innovative. In some ways it is, but many of these ideas have been tried before. In fact every time workers enter into struggle, the basis of some of Albert's theories can be glimpsed. In every strike committee, picket line and workers council, the basis for a new way of organising, planning and distribution raises its head. In this context Albert's ideas are important, but the struggle to create that world cannot be ignored.

James Meadway provides a more in-depth review of Parecon and several other "anti-capitalist" books of a similar ilk, in this extensive review here.

There is an excellent debate between Michael Albert and British Marxist Alex Callinicos on the ZNet website, covering much of the ground of Parecon. It is online here.
Posted by Resolute Reader at 4:37 pm 2 comments: