Eugene Linden - The Winds of Change: Climate, Weather, and the Destruction of Civilizations 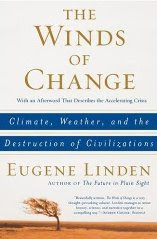 Just how civilizations have been altered by the climate is something that scientists, historians and archaeologists are happy to debate to a great extent. There is no doubt however, that climate (or rather changes in climate) has had a tremendous effect on the development (or retardation) of various historical societies.

Eugene Linden has summarized these discussions remarkably well. In particular, Linden has produced a useful account of just how the earth’s climate works – how air circulates in the atmosphere above us, how the great oceanic currents bring warmer water to parts of the North Atlantic, and cold water elsewhere, altering local temperatures. He paints a complex picture of an intricate system, where minor changes in on area can have dramatic consequences elsewhere.

Linden also tells us the story of the study of climate – in particular how modern scientists determine how the climate was in past ages. We meet the men and women who study ice cores from the Arctic, looking at the makeup of bubbles trapped in the ice from centuries ago.

This then would be a fairly useful introduction to the study of historic effects of climate. However it suffers very much from bad editing and overbearing writing. While this is minor, it’s really annoying in places – often for instance, Linden uses acronyms that aren’t immediately explained. Sometimes he makes the same point twice (as when he mentions the launching of an underwater measuring robot, shaped like a torpedo – he jokes twice on the same page that it was done on September 11th).

Additionally, I occasionally felt that the writer was trying to hard – for instance “milquetoast” is a word that is rare even in its native America. It certainly makes the writer sound pompous, when he really wants to be accessible and readable.

There are a couple of little errors in the science too, which are annoying in the context of a popular science book. The Maunder Minimum was not the “coldest period” of the Little Ice Age, a time of “dramatically reduced sunspot activity”. Rather it is the name given to the period when sunspots almost disappeared from the face of the sun. This isn’t hair splitting – it’s a silly error given that this is one subject that climate deniers go on about.

Climate Change did bring down ancient Pharaohs, Vikings and probably played a major role in the end of Mayan civilization. Eugene Linden brings the evidence together well, and is at his best when describing how the impact of climate events are hampered by the priorities of modern society. In an excellent chapter “El Nino meets empire”, Linden shows how the free-market priorities of the British Empire meant that climate related famines had a destructive result far greater than they should have. Linden dwells on Mike Davis’ well known book on El Nino, Late Victorian Holocausts to emphasize this and to lead into a discussion on the impact climate change could have on our modern society.

As I said, Linden is at his best at this point. How major and abrupt climate change would impact a planet of 6 billion people is horrific to imagine. The book is very much I think a polemic at a US audience blinded by corporate funded climate deniers and uncaring government, as such it’s an interesting read, but probably not the best starting place for someone interested in the topic who has already read some stuff on the subject.