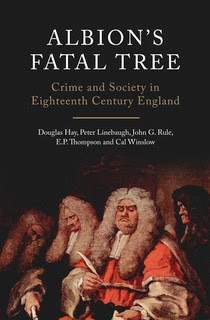 This recently republished collection of essays is essential reading for anyone trying to understand how the British criminal justice system evolved, and how it was moulded into a system that protected wealth and private property, under the illusion of offering justice for all.

Douglas Hay's opening essay describes this process. In 1788, the editor of Pleas of the Crown wrote, "The increase of commerce, opulence, and luxury' [since the first edition of 1715] 'has introduced a variety of temptations to fraud and rapine, which the legislature has been forced to repel, by a multiplicity of occasional statues, creating new offences and afflicting additional punishments."

Many of these statutes were capital, but perhaps surprisingly, Parliament didn't enact them as a "conscious public policy", rather they, initially at least, came from individual interests driven through by those acting in the name of various commercial organisations. So, in 1764, Parliament decreed "the death penalty would apply to those who broke into buildings to steal or destroy linen, or the tools to make it...". This was enacted in an "incidental" clause to an act that incorporated the English Linen Company. In other words, the death penalty was added to protect the interests of the owners.

Despite the enormous increase in the number of crimes that faced a death penalty, there was a decline in the use of state killing in this way. "A coexistence of bloodier laws and increased convictions with a declining proportion of death sentences that were actually carried out." Hay explains some of the reasons for this apparent contradiction.

"Most historians and many contemporaries argued that the policy of terror was not working. More of those sentenced to death were pardoned than were hanged; thieves often escaped punishment through the absence of a police force, the leniency of prosecutors and juries and the technicalities of the law; transported convicts were so little afraid that they often return to England to pick pockets on hanging days; riot was endemic."

As Hay points out, "if London rioted at Tyburn, how much worse would disorder be if the executions were for times as numerous."

However, rather than repel these laws, parliament continually added more capital statutes, despite the campaigns of reformers suggesting the opposite. Hay argues that the answer to this seemingly irrational behaviour lies in understanding that the ruling class saw the law as "one of their chief ideological instruments". Hay points out that the elaborate and inefficient "absurd formalism" of the legal process gave strength to the ideology of the process as being just. The story of one "wicked aristocrat" who was hanged on the scaffold was told and retold "well into the 1800s". It served to suggest that before the law, everyone was equal, but in reality the rich could and did escape justice through their wealth, power and connections. Even the fact that many convicted of a capital offence were pardoned by the king was used to demonstrate the "use of mercy" inherent in the system, helping to justify the social order. As Hay points out, all this was necessary, because

"It was easy to claim equal justice for murderers of all classes, where a universal moral sanction was more likely to be found, or in political cases, the necessary price of a constitution ruled by law. The trick was to extend that communal sanction to a criminal law that was nine-tenths concerned with upholding a radical division of property."

The rest of the essays in this volume examine how this played out in different arenas of the 18th century world. It also demonstrates how the public reaction to the changing laws and property relations expressed itself in many different ways. Peter Linebaugh's article on The Tyburn Riot Against the Surgeons shows a population refusing to allow the system to have its way entirely. Pitched battles were fought by the crowds at executions to prevent the bodies of those killed being taken away and used for dissection. Resistance and solidarity wasn't just rioting, it was also in collective attempts to raise money for a proper burial, or to return the body to loved ones.

One of the most remarkable essays is the piece by Cal Winslow, Sussex Smugglers. This documents the enormous scale of smuggling in England, and the limited ability of the ruling class to deal with this. Entire communities, even if not actively engaged in smuggling, demonstrated support and solidarity with those evading taxes and customs duties. Pitched battles were fought, and the smugglers were frequently successful. The scale of smuggling was such, that it encouraged the development of trade in areas "not easily reached from established centres of communication". Thus smugglers were actively encouraging the development of capitalism, even as they were resisting it. Turning to smuggling was less about the poor trying to find a solution to their poverty, smuggler's "took to the highway", "not just because they lost their trade, but because they were determined... 'to resist to a man'."

The smugglers were resisting the imposition of new capital relations. These essays, document the imposition of laws about wrecking, poaching and smuggling and other new crimes, and show how preparing for new capital relations impoverished the majority in the interest of the minority. (Douglas Hay suggests that in the ruling class in the 18th century was less than 3 percent of the population). But these laws and attempts to enforce them met with fierce resistance and solidarity. Capitalism was born in blood, violence and oppression. But, as this book also shows, the violence was challenged by the solidarity of entire communities who fought to make the world more just and equal. That the lawmakers had to use this language is one small victory of those at the bottom of society.