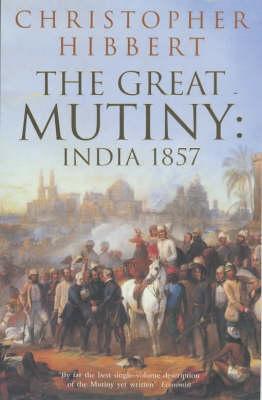 Having recently read William Dalrymple's history of the East India Company, The Anarchy, I was drawn back to the subject of the Great Indian Uprising of 1857. It was this rising which was the final nail in the coffin of the East India Company and indeed transformed British rule in India. The Rising has been more commonly known as the Indian Mutiny which explains the title of Christopher Hibbert's book. But, as Hibbert shows the rising was a much broader event than mutiny indicates. While it began with Native Muslim and Hindu troops, they represented and tapped into much wider discontent with British rule. The rising in Delhi for instance began with troops, but quickly spread to other individuals. Two British officers there, fleeing rebellious mutineers from the nearby garrison of Meerut where "attacked by the populace hurling bricks at them". More substantially, Hibbert describes the consequences of the complete collapse of British rule:

By now there was not a single representative of the British Government at any of the outlying stations in Oudh. The downfall of authority had been followed by a general uprising of the talukdars [landowner during the Mughal Empire] who, helped by their retainers, ejected the families to whom their former estates had been allocated and took the opportunity of attacking their rivals and enemies.

Thus the rebellion saw an uprising of the army, supported by the general populace within which different groups tried to assert, or reassert, their interests and power. Initially I was disappointed that Hibbert seemed to focus almost entirely on the events of 1857 through an account of the British. But there is a significant chapter on the dynamics of the Indian side around Delhi where Bahadur Shah Zafar, the last Mughal Emperor, became a figurehead of the rebellion. Hibbert describes the difficulties faced by the King and the various forces within his court attempting to push their agenda. Its interesting to consider that by focusing on Delhi the rebels probably undermined their strength elsewhere, but also the extent to which they considered a Mughal Emperor (i.e. a restoration of the old order) as the alternative to British rule. Unfortunately Bahadur Shah Zafar was not the person to drive the rebellion through to victory. Sadly, other than this section, there was little else from the Indian point of view.

One thing all histories of the Rebellion do highlight is the violence and atrocities. Parts of Hibbert's book are nearly unreadable when he describes what both sides did to each other. At the time the violent murder and massacre by the rebels of British men, women and children, where used to stir popular sympathy against the rebellion. It lead to the most brutal repression of the rebellion and systematic killing of Indians (rebel or not) by the British. Hibbert's account however goes someway towards explaining the levels of violence against the British.

A key element is the horrific racism and casual violence used against the Indian population (including the soldiers) by the British. Hibbert quotes one example that serves to illustrate the general British attitude to the Indian people:

the sepoy is [regarded as] an inferior creature. He is sworn at. He is treated roughly. He is spoken of as a 'n*****' He is addressed as 'suar' or pig, an epithet most approbrious to a respectable native, especially the Mussulman [Muslim] and which cuts him to the quick... the younger men seem to regard it as an excellent joke, as an evidence of spirit and a praiseworthy sense of superiority over the sepoy to treat him as an inferior animal.

It is this racism that coloured the British view of the natives. Indeed they were blind to the stirrings of discontent and rebellion within in their army and their approach to the rebels' initial discontent on the parade ground was to dismiss their concerns, patronise them and then punish mutiny with such over the top violence that to an outsider it could only spread further rebellion. But because the British saw the Indian people as "children" few could imagine the threat.

It is notable that this racism towards the Indian people undermined the British militarily. Hibbert quotes an account from an engagement "five miles north-west of Delhi" where the British took a heavy beating from Indian artillery and cannon fire. As one contemporary account reproduced by Hibbert went, "I heard many officers who have been in action before say that they were never under such fire as the rebels poured into us... Nearly every shot they fired told on us."

Here, as later, British officers were amazed by the 'wonderful range and accuracy' the mutineers 'got out of their guns'. It was such a 'most extraordinary thing', in fact, that some officers put it all down to 'astonishing luck rather than skill, for the firing of shells and the cutting of fuses [were] much too scientific for natives to understand'.

One of the strengths then of Hibbert's book is that he sees that the origins of the mutiny lay in the way that the British ruled India. They stripped the country bare of resources, wealth and money at the same time as treating the people as beneath them. A second strength is that he doesn't baulk at highlighting the great injustices done by the British in revenge for the rebellion. Hibbert shows how the grossest of rumours were used to encourage brutal revenge by the British, but often they were completely made up.

But most of the appalling crime rumoured to have happened, and reported as facts in letters to England, bore scant relation to the truth. Magistrates and Special Commissioners who endeavoured to discover reliable evidence of widespread torture and rape failed to do so.

This is not to downplay the very real violence committed by the rebels. But to show the way the British constructed a myth that enabled them to drive through both the repression of the rebellion and the reconstruction of British rule to prevent it happening again. Hibbert doesn't shy away from detailing this violence which rarely made it into popular accounts of the "Mutiny" written afterwards.

All in all this is an excellent short history of the Indian Rebellion. Christopher Hibbert writes clearly, even when discussing the most hideous of material. His book is an excellent introduction to the first great rebellion against British rule in India.

I have yet to read any Hibbert (or the Dalrymple) yet, but have them on my Wishlist, for one day...You’ve made them sound very tempting though.