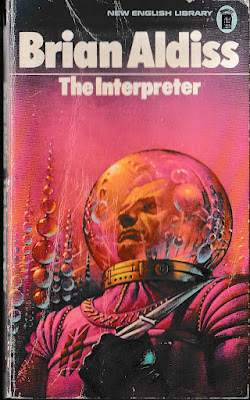 This is an interesting early attempt to grapple with colonialism through science fiction. First published in 1960 it turns some of the tropes of science fiction on their heard by making Earth the victim, rather than the centre of a galaxy spanning civilisation. Earth, and its people, are simply another star system putting resources and wealth into the alien civilisation that has "civilised" them. In his author's note Brian Aldiss comments that the book came because he had seen "at first hand the uneasy relationship existing between 'imperialists' and subject races in India and Indonesia". Sixty years after its first publication author's would no doubt use different language, but there's no doubt that Aldiss is trying to address big questions in a progressive way.

The Interpreter of the title is Gary Towler, the lead interpreter to the alien commander. The aliens refuse to learn Earth's language, considering the art, science and language of humanity simplistic, ugly and stupid. They laugh at Earth's art, condemn its people and strip it of resources. They've also found a layer of people to be their go between, people like Towler whose favoured positions grant them some benefits over the mass of the population, but tie them to the alien's interests.

Word of the ill treatment and corruption on Earth has reached the alien's capital and an inspector heads to the planet. The distance gives the alien commanders on the ground time to set up a better story, using a war with Earth's rebels to justify their behaviour and hiding their corrupt practices. The story focuses on Towler's attempt to convince the visiting liberal dignitary of the reality of their rule, but very little goes to plan.

It's tempting to read a great deal of anti-colonial politics into the story - there's an interesting theme about armed resistance versus passive acceptance of rule in return for improvements for instance- but I'm not sure how much Aldiss draws on real struggles against the British Empire. The ending is far to easy, bloodless and simple, though there is quite a twist. The biggest weakness is the ending which wraps things up too quickly, and leaves some of the plot unfulfilled.

Fans of early science fiction who are of a liberal bent will probably enjoy this book, because it demonstrates that mid-twentieth century science fiction had at least a few authors who were trying out big ideas and radical politics within their novels - unlike writers like Isaac Asimov who were content to pretend Empire would always be benevolent. At the very least Aldiss celebrates anti-colonial rebellion, even if the language and politics feel somewhat dated today.

Posted by Resolute Reader at 6:17 pm