Joe Jackson - The Thief at the End of the World, Rubber, Empire and the obsessions of Henry Wickham 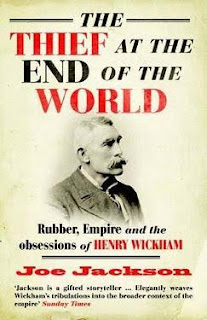 Imagine a world without rubber. Cars would have to run on wooden tires. Engines would leak oil and petrol through badly fitting pipes. Electrical lights would rely on power that came through live wires. Undersea communications cables would be impossible without the insulation and contraception would be a lot more risky.

In the later part of the 19th and early 20th century, countries across the world started to realise that rubber, which came from a variety of different trees, dispersed across the rain forests of Southern America was a vital economic resource. As the decades progressed, the development of the automobile industry as well as the vehicles for the modern military machine made rubber a strategic resource worth millions of pounds a year.

The vast majority of the world's rubber came from Brazil. The trees didn't grow in plantations, they were isolated within the almost impenetrable forests. When seeds were removed from the trees, they tended to go rancid before they could be planted in other countries. This natural monopoly of rubber allowed an economic boom for some planters in South America. By the early parts of the 1900s, the city Manaus min Amazonia was a town to rival some of the great capitals of the world. Trams threaded through streets carved from the rain forests, the world's great singers and dancers risked malaria to perform in the giant Opera house and fortunes were being made.

It also was a major headache for the heads of industry in countries like Britain and America.

The British Empire had always believed that the natural world was something to be exploited in its own interests. Kew Gardens was redesigned as a place to examine and exploit the fauna of the world. Explorers and adventurers brought thousands of seedlings to the institute so that they could be examined for possible benefits to the Empire. Kew's first great success was getting Quinine out of South America, making the British conquest of India and Africa easier in the face of malaria.

Suddenly though, the Empire was reliant on another nation. Brazil was rapidly developing as a powerful nation in South America. Kew was the instrument which British capitalism needed to get it's own source of rubber. A variety of adventurers were sent on the long trek to South America to source seeds of the rubber tree. It's at this point that Henry Wickham enters the scene.

Up until he was called upon by the Empire, Wickham was a fairly insignificant figure. Born into a humble family that had had a rich past, he was determined to make his fortune. His life is marked out more by the failed enterprises he set up in countries from Amazonia to Australia than his successes. On the spot in South America, with knowledge of the rubber tree and its life cycle, he was able, in 1876 to get tens of thousands of rubber seeds back to Kew. These formed the basis of the rubber plantations in the Malay Peninsula which would eventually undermine the Brazilian source. Leading to the collapse of places like Manuas.

That's one side of the story. The tale of how capitalism and the British Empire could exploit and rob other nations and the natural world to fulfill its own interest. But this excellent biography has a second fascinating tale. It is the story of how individuals like Henry Wickham buy into the dream of Empire for personal glory, welath and international fame.

Wickham became famous long after his triumph in stealing the seeds. He was, like so many civil servants merely a tool, forgotten by the bureaucracy after he had ceased to be useful. His advice on the planting of the rubber trees was ignored. His letters to the people at the head of Kew Gardens go from triumph to pleading as he is forgotten. When he receives a letter asking him to secure some seeds his personality changes overnight. From failed rubber plantation owner to servant of the Empire in a matter of moments. He doesn't realise that Kew has many others trying to do the same - that he is merely a name on a list. He now becomes prepared to sacrifice everything for the Empire.

Having dragged his extended family to South America he leaves those still alive to suffer and escapes to London as soon as he can. Then with his reward in hand he drags his long suffering wife on another fruitless attempt to settle in Australia. Failure after failure follow him. His wife, unusually perhaps for those Victorian times, leaves him. A letter he writes personally to Queen Victoria asking for recognition for his services leads to him being publically deserted by the Empire he had risked everything for.

Henry Wickham's story is a fascinating one. He is one of those who gave everything in the service of the British Empire. He doesn't sacrifice everything, unlike the tribesmen who are tortured and killed in order to produce the rubber for the car industry. He doesn't loose his life as so many other did in the attempt to rebuild the world in the British image. But the image of him, tired and lonely at the end of his life, reliant on money from the American rubber industry speaks volumes for the way Empires exploit the world and their own people.

Goodman - The Devil and Mr. Casement
Posted by Resolute Reader at 9:37 am