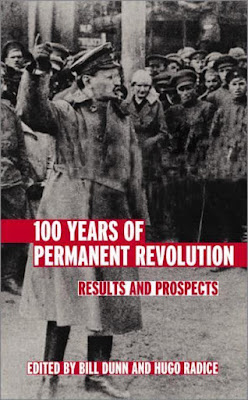 In 1906 Leon Trotsky published Results and Prospects. The article was written in the aftermath of the 1905 Russian Revolution and summarised his concept of permanent revolution. This idea was perhaps Trotsky's most important theoretical contribution to revolutionary socialism in the period running up to the 1917 Revolution. This collection of essays was published on the centenary of Trotsky's first article and contains studies of the ongoing relevance of the theory. The editors Bill Dunn and Hugo Radice summarise Trotsky's insights thus:

Trotsky rejected a 'stage's theory of revolution - that Russia would have to wait until capitalism was fully developed before socialism could be put on the agenda. Any Russian revolution had to be understood not in isolation, but as a world event both in its causes and consequences. Despite its absolute 'backwardness', competition with the West, and penetration of capital from the West, produced vast concentrations of workers capable of challenging Tsarist power. Russia alone lacked the material basis for establishing socialism, but the seizure of power by a workers' government could lead an international revolutionary process. On a world scale, the development of capitalism already provided ample economic foundations for socialism.

Reading Trotsky's theory today, the editors say, "one is struck by his potential relevance". The theory itself however, was a fundamental break from the general conception of revolutionary Marxism at the time. Even Lenin, a thinker fully capable of breaking out of the constraints of existing revolutionary theory, would not make the leap that Trotsky did in 1906 until the actuality of revolution in 1917. In his essay, Michael Löwy asks, "how was it possible for Trotsky to cut the Gordian knot of Second International Marxism"? He explains, "a careful study of the roots of Trotsky's political boldness, and of the whole theory of permanent revolution, reveals that his views were informed by a specific understanding of Marxism, an interpretation of the dialectical materialist method." Löwy argues that Trotsky's insights arose because he refused to reduce "social, political and ideological contradictions to the economic infrastructure". It clearly was a major break with Second International Marxism, though I think Löwy  goes to far in suggesting that Lenin didn't make the same leap because he did not "discover dialectics" until 1914. What I think is missing from these insights by Löwy is a sense of the way that the experience of Soviet power in 1917 shaped Lenin's views, as well as the failure of Second International Marxism when tested by the First World War.

Trotsky's theory was not widely read at the time he first wrote it, and in the aftermath of his defeat by Stalin, it was side-lined even further. One of the reasons for it, is that it is a direct challenge to the Stalinism nonsense of "socialism in one country". Daniel Bensaid's article quotes Trotsky saying that Marxism, "takes its point of departure from world economy, not as a sum of national parts but asa mighty and independent reality which has been created by the international division of labour and the world market". Elsewhere Trotsky wrote (in 1927) that "The completion of the socialist revolution within national limits is unthinkable. One of the basic reasons for the crisis in bourgeois society is the fact that the productive forces created by it can no longer be reconciled with the framework of the nation state".

can be better understood as a 'revolution of backwardness;... that is to say, as the outcome of the process whereby the revolutionary moments in the developmental trajectory of a non-capitalist society, situated within and under constant impingement of, an increasingly capitalism-dominated international space, assume a particular character underivable from the backward society's internal dynamism alone.

He argues that a failure to understand this sort of approach has been "catastrophic" for the Iranian left. He concludes, as most other authors do, that Trotsky's theory is indispensable for Marxist praxis today. Others aren't as clear and some essays suffer from theoretical weaknesses. Neil Smith's piece argues that the central position of the nation state is being challenged in their role as the "building blocks of a global social and political economy" by institutions such as the IMF, UN and World Bank. Such arguments, common in the early 2000s, are clearly erroneous today. Again, Trotsky's understanding of the dialectical integration of nation states into a global economy is much more useful in understanding global politics and the process of international revolution.

Since this book was published in 2006 we saw the way that economic integration in the Middle East helped spread revolution through the region. We also saw the relevance of a theory of permanent revolution that could encourage workers and peasants to fight for more than simply the replacement of dictatorship with bourgeois democracy - for real economic and political control from below. This is why the conclusion of Micahel Hanagan's piece on Permanent Revolution and Ireland is disappointing as he finishes by saying that "100 years [later] Trotsky's work is still capable of suggesting research agendas and inspiring debates".

As the revolutionary process in Sudan continues to raise challenges and arguments for those taking part, I'd argue that the importance of Trotsky's work goes far beyond the academic debate and research, but holds out a key insight into how revolution can be victorious. In an era when we face "socialism or extinction" that's the real point. Luckily the vast majority of the essays in this book understand this, and while some of the chapters seem dated in the face of more recent experience, all of them give insights into how Trotsky's Permanent Revolution may well be the revolutionary politics of the 21st century.

Trotsky - The History of the Russian Revolution
Trotsky - On Britain
Trotsky - Lessons of October
Trotsky - 1905
Trotsky - An Appeal to the Toiling, Oppressed and Exhausted Peoples of Europe

Posted by Resolute Reader at 11:19 am