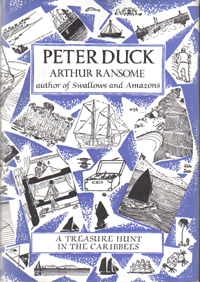 When I was a kid, I read and re-read the "Swallows and Amazons" novels many times. The descriptions of children free to idle their summer holiday's away on the lakes and hills of the Lake District, with their own little sailing boats spoke to me more than anyone could have imagined. Of course, 70 years after they were set, you'd be hard pressed to find a family willing to let their kids play around on Lake Conistan, without life-jackets. Never mind let them camp over night.

Of the whole series though, there were a couple of novels that sat uneasily with the others. One of these, Peter Duck, is the story of a sailing trip that the Swallows and Amazons undertake, with Captain Flint and the old sea dog Peter Duck.

The trip, predictably for a children's adventure involves pirates, treasure and ship-wreck. It's all told in Ransome's wonderfully simple style.

Ransome was a fascinating man - Russian correspondent for the Manchester Guardian, he ended up marrying (and bringing back to London) Trotsky's secretary, who I believe went on to do quite alot in the British Communist Party. I am privileged to have on my shelves two small volumes of Ransome's memoirs of his time in Russia before and after 1917.

But back to Peter Duck, you see it's a lovely children's tale, perfectly English in its outlook. But what I find strange is the way it's removed from the others in the series. You see the voyage (fantastic and memorable that it must have been - who forgets a waterspout for instance) is never referred to again and the title character, Peter Duck shares a name with one of the children's imaginary friends from an earlier book.

It seems that this is actually an imaginary story, which doesn't fit the other imaginary books - if you know what I mean. From Wikipedia I learn that


"...the story is supposed to be one created by the Swallows and Amazons while staying on a Norfolk wherry with Captain Flint in the winter between the first two books."

We also learn that there was an extra chapter explaining this, which were removed from the book but are reprinted in Christina Hardyment's book on Arthur Ransome, Captain Flint's Trunk. 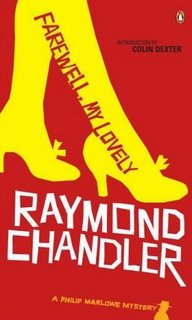 Predictably confusing, with razor sharp wit and a plot as seeped in bourbon, cigarette smoke and blood as any other novel staring Chandler's famous detective, this Phillip Marlowe novel is superb.

To talk more would ruin the story - you can get a rough outline of the twists and turns at the relevant Wikipedia entry - though you'd be far better spending a couple of hours reading the whole thing!

As I've argued before, Chandler has some of the best writing of any detective novelist, and this one is no exception. In fact, it has one of the best lines of any book ever, when Marlowe describes seeing a picture of a beautiful blonde woman that might hold the key to the case, he remarks that she is

This quote is apparently available on a t-shirt which just goes to show that nothing is sacred. Though I doubt that cynical old Marlowe would have been that surprised.
Posted by Resolute Reader at 3:54 pm 2 comments: 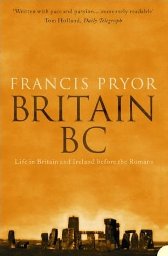 The period of history before the Romans came to Britain gets little enough attention. Right at the end of his excellent and illuminating book, Francis Pryor makes the point that the British Museum devotes less than 2% of its space to items from pre-Roman Britain.

The periods of Neolithic, Bronze and Iron in the UK are surprisingly well understood, though as with many periods of ancient history, you can get a group of archaeologists to argue into the small hours over the exact meaning of small finds or the arrangement of uncovered stones.

Pryor takes us on a historical journey right through the “half million or so years that elapsed before the Romans introduced written records to the British Isles”. In doing so, we learn a surprisingly large amount about life in “prehistory” and about the people who study it. In particular, I was struck by the large scale nature of some of the work done by people who in the past have been thought of as quite backward. We have all seen images of Stonehenge, but Pryor makes the case that Stonehenge was part of a “ritual landscape” that included tombs, paths and other large ground markings called “cursuses”.

He also points out that the ancients would have cut down hundreds of acres to create this landscape and allow it to be seen from afar. This is all evidence for collective thinking that is quite unlike the image of small bands of people we often have heard about in the past. I also particularly like how he shows that for people that distant from us, we must avoid making assumptions based on our own society – as life and death, myth and reality, past and present, religion and life must have been much more intertwined than in our own society.

It’s rare that objects other than stone or metal survive for long. However there are some places where wooden posts, pathways and so on have survived – usually bogs or similar wetlands. I was amused to see that the nature of this preservation leads scientists to be able to pinpoint with great accuracy the moment they were made – the winter of 3806 – 3807 BC for one track uncovered in Somerset and pictured in the book.

Pryor’s creates a picture of tremendously complex societies and histories – and shows how the different ages (stone, bronze and iron) tended to merge gradually into each other, rather than having specific start and end dates. He shows how there must have been traditions and histories that linked the peoples of these times. However, I do think it gets taken too far.

His attempts to show a continuity with the past are interesting, and one has to agree with his argument that invasions of Romans and Normans failed to wipe out the indigenous society (arguments of an earlier Celtic invasion previously hold little sway for modern archaeologists). But too say that as he does that “I genuinely believe that the British belief in individual freedom has prehistoric roots” is to invite ridicule – particularly as there have been many points in history since prehistoric times where individual freedom has been oppressed.

What Pryor does, is to bring alive a thriving culture and society from Britain’s past, the people’s homes, their farms, their deaths and their monuments. But I think he narrowly avoids falling into a right-wing trap that roots today’s society in some long unbroken line into the distant past.
Posted by Resolute Reader at 9:07 pm 2 comments: 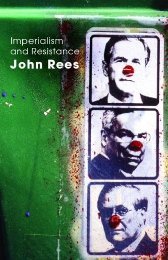 As a leading figure in the international anti-war movement, John Rees has probably had more opportunity to reflect, debate and discuss the general trajectory of the Imperialist powers since the events of 9/11 than most other people. His latest book builds on articles he’s written for the International Socialist Journal, and brings them together in an attempt to explain the forces at work behind the “war on terror”. He also offers both a method to oppose the drive to war, and an alternative to the society that generates it.

John Rees opens the book, by looking at why the US is the most simultaneously the most powerful military nation in the world, and yet is no longer “capable of sustaining a long period of stable capitalist development”. He argues the world is a much more competitive environment than ever before, and the economic conflicts between states are ending up being resolved in the political sphere – hence the battles over trade agreements and in a more heated form in the Middle East.

The book then looks at the role of oil – its importance and centrality to capitalism and hence why Imperialist nations have fought for control of the Middle East since the early 1900s. Interestingly Rees also looks at how the interests of multinationals are tied up with the states they are linked to – nowhere more obvious than with the huge oil corporations that first relied on British and then US military might to protect their profit making abilities.

The final chapters analysis how the global world system we live in, have lead to greater and greater inequality and how our democratic rights are being trampled on to help further the exploitation at capitalism’s heart.

John Rees was priviledged to have seen some of the “democratic revolutions” that struggled to overthrow the dictatorships of East Europe and Indonesia – he brings together these experiences with a general explanation of where the power lies to change society (the mass working classes of the world) to show how struggles for liberation and democracy have one or lost. He concludes that “Who wins [revolutions], and how much they win, is decided to a significant degree by the organisational and political capacities of the left”.

The last chapter “Resisting Imperialism” looks at the type of anti-war and anti-imperialist movements that we need to stop Imperialism, and to bring about a world without war and competition at it’s heart.

“Imperialism and Resistance” is not an easy book, but it is a book that is designed to strengthen the anti-war movement. For that reason it’s one that should be read, debated and discussed…. something that the anti-war movement, at least in this neck of the woods, is very good at.
Posted by Resolute Reader at 5:58 pm No comments: