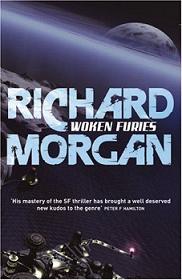 I have to admit that I really like Richard Morgan's SF. This admission is important, because what I am about to say may sound like I hate it.

Apart from the fact that one of his central thesis' seems to me to be so implausible, that no technology of the future can ever make it happen - that a human's consiousness and memories can be stored electronically for retrieval at a latter date - I really like the gritty, dirty, realism of Morgan's futures.

Ok, so the best SF of recent years has shied away from glorious future utopian worlds where robots serve your every whim, and men are men and women beautiful. Morgon does the exact opposite. The future is filled with war, revolution, bloodshed and violence, though his men are still men and the women beautiful.

But his stories. Well, there I have a problem. I just can't seem to follow the plot. It all fairly races along, you meet characters, like them, dislike them, then they are killed and the plot twists and turns like a worm in soapy water. Christ knows what's happening, but it all seems quite fun. Anyhow there it is. I'm sure it's a great SF if you can work out what is going on. But it's riveting none the less.
Posted by Resolute Reader at 12:15 pm 5 comments:

When Leon Trotsky described the people who made up the mass backbone of the Fascist movements of Europe in the 1930s, he wrote:

"On the scales of election statistics, one thousand Fascist votes weigh as much as a thousand Communist votes. But on the scales of the revolutionary struggle, a thousand workers in one big factory represent a force a hundred times greater than a thousand petty officials, clerks, their wives and their mothers-in-law. The great bulk of the Fascists consists of human dust."

This "human dust", these clerks and petty officials etc, by and large came from the mass of the middle classes, desenfranchised and ruined by the economic collapse of the early 1930s. The Middle Class, Trotsky went on to argue spends much of it's time economically on the edge. Small changes in the economy can ruin them easily. The very nature of their employment and livelihoods mean they have little collective means to organise - often (as shown in this novel), the small business men and shopkeepers have nothing but contempt for their fellows.

H.G. Wells' novel doesn't deal with the rise of Fascism. Nor even does it deal with economic collapse. Instead, his book about the life of Mr. Polly, is about how empty life can be. How hard you have to work to make a living, and how little satisfaction you gain from it. How difficult it is to break out of your existence, or change the it's direction. How huge and powerful the forces ranged against little you are.

Mr. Polly, eventually does find a way out. He runs away into the idylic English countryside and finds the life he craved. I don't know if Wells' really that men like Mr. Polly were the reality, or that such succesful "escapism" was a route out of alienation or poverty for the majority of people, certainly it seems a perculiarly "English" notion of redemption.

The History of Mr. Polly, was written in 1910. It predates World War One and the rise of Fascism, and World War II. But you can't help but feel that Mr. Polly was really lucky. A few years later, he might well have found himself in the midst of a far bigger malestrom.
Posted by Resolute Reader at 7:19 pm No comments: 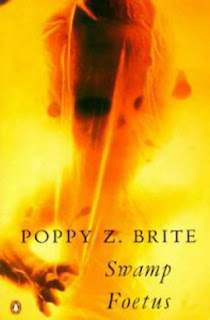 Some things are best left in the past. When I first read Poppy Z Brite, her books captured that strange fixation of the late 80s and early 90s with vampires, ghosts and the gothic horror, mixed with the emerging internet age. Very exciting. She also wrote about gay sex and a generation of goths probably thought she should be made queen or something.

Most of the stories are readable. Some are violent. Many try to have a twist at the end, but to be honest only the most naive of readers won't see what's coming. So I have to express my disappointment - after reading the two aforementioned novels years back, I pounced on this with glee upon seeing it in a second hand book shelf. I would have preferred to have kept the pleasant memories of her previous novels intact by not reading this.
Posted by Resolute Reader at 2:26 pm No comments:

This, the sequel to the magnificent “I Claudius” deserves to be reviewed differently to it’s predecessor. While there is little doubt in my mind that the first is a better novel, this book deals with much bigger issues and given the limits the author found imposed by history and his sources, it does so very well.

Claudius, history tells us, became Emperor of Rome after the justifiable murder of Caligula, and this book explores the realities of that reign through the eyes of Claudius himself. Here is the first contradiction – Claudius (as many emperors before him) is a committed Republican, longing for a return to the golden age of the Roman Republic, but constrained by existing circumstances. His initial plan to refuse the throne, is quickly blocked by reality, as he realises this would result in his own death and civil war for the empire. For British readers, Claudius is also important as the emperor who finally subdued the rebellious people of Britain.

Claudius spends the next 14 years of his reign trying to solve this contradiction – that the absolute power granted in the hands of a monarch cannot be resolved with his belief in democracy and republicanism. Granted, he attempts to be a “good” emperor. He repairs and rebuilds the damage wrought by years of misrule, but he cannot escape the fact that his total power enables him to right personal wrongs and deal his own brand of justice.

Ultimately you feel that Claudius becomes what he despises. An Emperor more concerned with spectacle, rather than honest rule. In that he is nothing more than a victim of his circumstance. Indeed the last months of his rule are marked by the fact that he really doesn’t rule anymore – letting others, freedmen and his fourth wife govern in his name. At the end, you feel that the sympathy you felt for the somewhat unlikely commentator on history from the first book is overshadowed by what he has become. In trying to select his son as his heir rather than the brash individual that became Emperor Nero, Claudius says it rather well

“I knew that Nero is fated to rule as my successor, carrying on the cursed business of monarchy, fated to Plague Rome and earn everlasting hatred, to be the last of the mad Caesars. Yes we are all mad, we Emperors. We begin sanely like Augustus and Tiberius and even Caligula ..... And monarchy turns our wits.”

Claudius (and we must presume Robert Graves) is using the old argument that power corrupts. Since the Roman Republic was never restored, even though many continued to proclaim its importance and necessity, it’s hard to argue anything different. Once again a fantastic novel and a great introduction to a confusing but important period of Roman history.

Graves - I Claudius
Posted by Resolute Reader at 11:19 pm 3 comments: