Brian Manning - 1649: The Crisis of the English Revolution 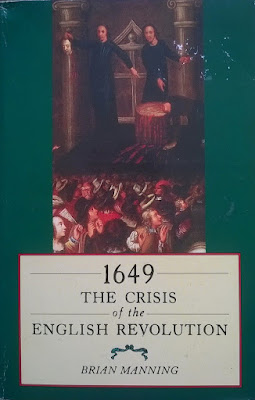 Brian Manning's 1649 is about a seminal year in world history, the year of the English Revolution. It was a year that began with the execution of Charles I, and ended with the consolidation of the Cromwellian regime. As such its a fascinating work that brims with the insights that only a Marxist historian could develop. It is also a work that takes seriously issues such as the role of women, or the poor in the revolution. Manning begins with a clear statement of fact about the revolution itself:

What occurred in 1648-9 was a military coup d'etat... there was no conspiracy and no secrecy, the army debated and prepared in full public view and gave notice of its intentions - but its actions were decisive and its success swift, and executed by the high command and officer corps without direct popular or mass participation... The events of December-January 1648-9 did lead to significant changes in political institutions and so fall into the category of a revolutionary coup.

Having described this as a coup, Manning is at pains to explain the participation and involvement of various forces. He argues that the "men who made the revolution", where "generally they did not come from the old ruling class or elites but predominantly from the 'middle sort of people', from which sprang the most dynamic and radical force in the parliamentarian party during the civil war.
He explores the radical ideas that were swirling around in this fantastic year, describing the flowering of discontent and thought, and the people who participated in it. A Leveller manifesto from September 1648 demanded, among other things, that

a just government be set up, wherein all men may be equally bound, and that all publike Officers throughout the Land be chosen freely every year, or oftner if need be; for usually all or most men turn Tyrants if they be in Publike Office above one year.

These ideas may have been pushed by a minority, but Manning points out they were "not so small a minority as is usually assumed", and it is notable "there was so little overt opposition or resistance" to the coup. Manning draws a very important conclusion, "That changes so profound as the transition from a monarchy to a republic caused so little disturbance or disorder implied not only acquiescence, but some willingness to give active support to the new regime.
This arises, Manning explains because of the class nature of the struggle. He says:

Class is a matter of relationships between social groups. The outcome of the revolution was determined by the widening of the gap between 'middle sort' and 'the poor' and the narrowing of the gap between the 'middle sort' and the gentry, which inhibited the 'middle sort' from appealing to the masses. The interests of the 'middle sort' lay increasingly in the extension of enclosure and wage labour. But most of them were not able to take advantage of this: some prospered but many were proletarianized, and the middle class emerged as 'a radical reordering of the social relations within the 'middling sort'. The social context of the revolution was an evolving middle class and working class.

In other words class determined the outcome of the revolution, but was a consequence of the changing economic situation within England. It was this that the old aristocracy was unable to reform itself to deal with, and thus lost out to the interests of a growing minority of the bourgeois order.
But the nature of the Revolution did not lead to mass transformation in consciousness. Manning notes, for instance, that the "mass" of women did not question their inferior social position. That said they did engage in mass politics, such as demonstrations, preaching and presentations of petitions to Parliament. In this sense, Manning says "there was a revolt against the degree of subjection that confined them to domestic and private affairs and denied them a public and collective voice in the great matters of religion and politics."
But if 1649 saw a great revolution, and huge transformations the agent of that change - the army - itself underwent a transformation afterward. If, as Manning says, it was a revolutionary force in the late 1640s, by the next decade it was a force for "order and stability".
Manning's book is an insightful account of a crucial year of revolutionary history. For those with some knowledge of key events and social dynamics of the English Revolution as well as some knowledge of other left works on the period, it is an indispensable addition to the library.