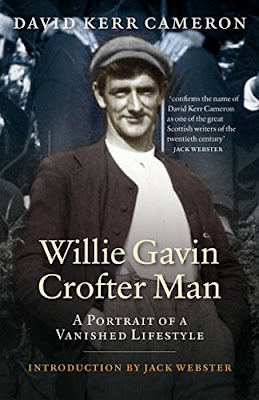 Willie Gavin, Crofter Man, is the second of David Kerr Cameron's trilogy about history and social life in the Scottish countryside. In this volume he looks at Croft farming, through the life of Willie Gavin, a anonymised croft owner from the early 20th century. Willie's life is recreated by Cameron through archival information, tombstones and the reminiscences of children and grandchildren.

Willie was an expert stonemason who became a crofter on his father's croft. Crofting was extremely hard and unrewarding, Cameron is at pains not to romanticise the lifestyle, or portray the life as some sort of rural idyll. Indeed he criticises those who see such farming as romantic in words that might be applied to those who retreat to the countryside imaging an easy rural life:

Of that rage for improvement, the birth of crofting was maybe the greatest betrayal of all; it deluded men, then trampled on their dreams. Folk took on crofts for the independence they thought they gave and doomed themselves to long disappointment. They believed they were perhaps putting a tentative first foot on the farming ladder and found instead that their position was untenably ambiguous in that new countryside and in a restructured society; they were neither masters nor hired men. Sometimes the croft's appeal lay in the deep-seated desire for a house that would be a home, settled and secure, in that new farming landscape of the tied house and the wandering cottar; the occupants found soon enough that the laird was sometimes as hard to please, and always to pay.

Gavin, perhaps, had less illusions, having seen his father's hard work. Though clearly Willie also believed things would be better. Each year the dreamed that the harvest would be his best, enough to break out of the cycle of poverty and debt. Each year it wasn't. In fact his wife was only able to break from the croft with her husband's death and the selling of his last harvest and all their possessions.

Mention of Willie's marriage brings up his wife, Jess MacKendrick. Her life is told by Cameron, alongside that of Willie. It is poignant - for Jess's life was hard - on her fell the twin burden of child rearing and home management, alongside agricultural work. She married Gavin after they met while she was working as a housemaid, and Cameron has dug out the shopping bill she had as, before their marriage, she purchased what would be needed for their home together. It's a moving list of the minutiae of daily life and the prices the merchant charged.

The twentieth century saw crofting life change - machinery for instance. Though Gavin was old fashioned and refused to use such equipment, relying on his own labour until the stroke that nearly killed him at 75 taking in the harvest in his fields. Cameron notes that this was likely Gavin's most successful harvest as he'd finally switched to a modern seed, though too late to make a real difference.

As with Cameron's other books, he blends archival and oral history with music, poetry and song. He notes how the stories that Jess tells her children provided a continuity, and their telling "knit the generations" and passed down the "Lore of the Gavins and the MacKendricks... imprinting identity". There is a real sense of the crofting life being locked to the past, but challenged by the new. That said, the family were realtively mobile, visiting town, travelling to see relatives and so on. It would be wrong to see them as being so poor they were trapped at the croft, on the other hand the croft demanded attention constantly.

The problems of this come out on the Sunday. As observant folk, the Gavins would not work on the Sabbath, despite the havoc this played at key moments in the agricultural calendar. Willie might, if Jess was not watching, make an adjustment to a rope - but little else.

As with all of Cameron's work, Willie Gavin, is an accomplished work of social history that will fill in gaps for those visiting Scotland, and perhaps staying in an old croft. There is no sanitisation here - we are constantly reminded that the modern Scottish landscape was made through hard work, poverty and endless labour by people like Willie Gavin and Jess MacKendrick. It is worth reading this book to remind ourselves of this.

Cameron - The Ballad and the Plough: A Portrait of the Life of the Old Scottish Farmtouns

Posted by Resolute Reader at 4:47 pm