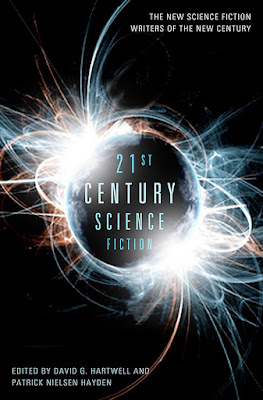 After several recent dives into the early history of written science-fiction (see here and here, for instance) I decided to look into more contemporary works. One of the motivations for that was to explore how modern SF considered subjects that were rarely discussed in some of the classics of the genre. Issues such as race, colonialism, class and gender.

This collection of short stories and novellas is based, with a single exception, on authors who came to prominence in the 21st century. As such its contents are frequently far in time, and subject, from predecessors of the 1960s and 1970s. However thematically in some cases that distance is not so far. There are 34 stories in the collection, and it is gratifying to see that many of these authors are not white, male and North American or European. The genre is much more diverse than it was, though there is still progress to be made.

In terms of subjects I found my appetite for something different sated quickly with the first story in the book Vandana Singh's Infinities which follows a Muslim mathematician on the quest to understand the infinite. Set in India at at time of pogrom and inter-religious strife it carefully links these issues with wider subjects such as love and solidarity. It was clever, moving and an excellent opening chapter. A similar, post-colonial tale was Tobias S. Buckell's Toy Planes, a brilliantly tight story of a few thousand words that deals with the first trip to space by a Caribbean spaceplane. The final words spoken by the black astronaut, "We're coming up to" felt like a declaration of intent by the author as much as the character. The story itself felt very much like a statement against the dominant forms of the genre.

Some of these themes are touched on in another interesting story by David Moles, Finisterra. Here the main characters deal with poachers hunting massive animals in the atmosphere of a gas giant, yet killing the largest of these threatens a poor community of "Savages. Refugees. Drug farmers". The themes of hunting, poaching and extinction are close to the surface, even if the story turns into a fairly standard, albeit very well written and paced, adventure story.

Several of the stories, including the aforementioned Toy Planes are very short, sometimes less than 1000 words. Several much longer novellas are included like Finisterra. These tended to not be as good as the others. I'm not a great fan of Peter Watt's novels, and while his novella The Island here was more accessible, it lacked a certain clarity on what was happening. Some of the other stories, such as Charles Stross' Rogue Farm, which deals with what happens when robotic AIs become autonomous, felt like call backs to an earlier generation of novels. That's not to say it wasn't fun - I've always liked Stross' writing. But their themes felt liked updated Asimov ideas - though far better written. Another example of this was the fascinating The Calculus Plague by Marissa Lingen which looks at how ideas might be spread virus like. People might be taught maths through contact with others, but how would capitalism actually use such technology. Lingen's story is a sobering and humorous take on that question. John Scalzi's Tale of the Wicked is a classic Asimov robot story, though the characters are more human.

There are well over thirty stories in this fine collection, all of a fine standard and my personal predilections are unlikely to be the same as other readers. Several of the stories, including Vandana Singh's were very good indeed and I particularly liked Cory Doctorow's Chicken Little an updating and riffing on a classic novel Space Merchants. David D. Levine's Tk'tk'tk stood out too - the account of a human salesman trapped on an alien planet, desperate for that last big sale to enable him to go home. Paolo Bacigalupi's Windup Girl made waves recently for a post-climate crisis world dominated by massive corporations profiteering from genetic information. His story The Gambler collected here is a fine return to similar themes. For sheer flamboyance I loved Paul Cornell's One of Our Bastards is Missing. Its a great style that reminded me of George MacDonald Fraser though Cornell's hero is no coward. I also enjoyed and was moved by Mary Rickert's Bread and Bombs, which rang true as we watch the war in Ukraine and remember the wars in Iraq and Afghanistan and the treatment of those fleeing conflict.

However my favourite in the whole collection was Jo Walton's Escape to Other Worlds with Science Fiction, which takes the trope of a world where the Nazis won, and twists it around. It is very reminiscent of a certain book by Phillip K. Dick, but done with style and a new little twist.

Many of these stories take up the question of artificial intelligence and what it means to be human / alive. I felt this preoccupation reflects less the technological advances of our era, and more a feeling of anxiety at the state of the world. Science fiction hasn't always been the best at dealing with such issues - preferring to offer escapism rather than explanation. This fine collection shows that this is changing and that the future of the genre is in safe hands. If you love science fiction, and particularly the short story form, I'd recommend this.

Posted by Resolute Reader at 9:15 pm