Charles Darwin - The Voyage of the Beagle 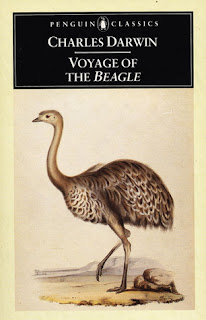 I started reading this book because of my own personal disgust at the rise of "intelligent design" in the US education system and I felt that my background in the physical sciences needed supplementing in those of the biological arena. Where better to start arming myself I thought than the work of the grand-father of evolution - Charles Darwin.

Most people know, that Darwin came up with the theory of evolution after years of studying. In particular, he studied the material, notes and theories he had got after an immense five year long round the world trip in the Beagle.

This book is a (presumably transcribed later) set of his notes from that voyage, what he saw in terms of flora, fauna, geology and what he experienced along the way - in particular the peoples and cultures of South America and Australasia.

This isn't an easy book to read - its the journal of a Victorian scientist just about to hit the peak of his career, as such it's peppered with references to other scientists, studies, ideas and contemporary references. I didn't recognise half the place-names in South America, presumably because they have changed as the European powers dominated that place less and less.

It's also more than a scientific narrative. Insights into many aspects of the Victorian world can seen - from the nature of life at sea, to attitudes to animals and people. It's also annoying the continuous lauding of "Englishness" as a way out of poverty, for "uncivilised peoples". Though he can be touching in his innocence for instance he writes of the Tahitians.


They are very tall, broad-shouldered , athletic and well-proportioned. It has been remarked that it requires little habit to make a dark skin more pleasing and natural to eye of a European than his own colour.

But even though he is angered by slavery and the treatment of indigenous peoples, he hasn't shaken off all the racism inherent in the society he lives in. For instance he writes that the Tahitians display "extreme good sense" at one point. Yet a few pages earlier he says that savage man has "reasoning powers only partly developed".

But what strikes the casual reader will be Darwin's immense love for nature and the world around him. Even though this is then tempered by some of his methods for taking samples.


A fox....was sitting on the rocks. He was so intently absorbed in watching the work of the officers that I was able, by quietly walking up behind, to knock him on the head with my geological hammer.

It's difficult to imagine any modern naturalist hunting and killing like this. But that's a reflection on the Victorian desire to fill museums as a method for advancing knowledge I suppose. The book is littered with accounts of shootings of birds and other animals as Darwin gets samples for his research.

Throughout the work and the trip Darwin is clearly grappling with a world and an understanding at odds with established ideas. Time and again he notes how geological formations must have taken aeons to develop. His famous description of the finches in the Galapagos Islands is clearly that of a man on the brink of a new idea. His discussion of the spread of disease towards the end of the book carries both the naive views of the science of that period and the germ of something else.

If you read this, I would recommend having some sort of reference to Darwin's voyage at hand, because it is useful to known what else happens on the voyage - in particular his relationship with the captain, and the sharp arguments they had over slavery.

The understanding of evolution that Darwin was able to unleash on the world was to change the world of science totally. But it would almost certainly have happened without him, though perhaps the explanation would have taken a little longer. Evolutionary thought works precisely because, as this work shows, it is the product of scientific exploration and observation. It is for this reason that it far outstrips any other, baseless idea that some on the religious right would force upon our school children.

Desmond & Moore - Darwin's Sacred Cause
Jones - Darwin's Island: The Galapagos in the Garden of England
Simons - Darwin Slept Here
Weiner - The Beak of the Finch: Evolution in Real Time
Angus - A Redder Shade of Green: Intersections of Science and Socialism
Foster, Clark & York - Critique of Intelligent Design: Materialism versus Creationism, From Antiquity to the Present
Posted by Resolute Reader at 8:00 pm 5 comments:

This is a brilliant debut Science Fiction novel. Stross has done something quite special here, as you can see from the tributes on the back of the book. He's come up with a whole new idea, and done it brilliantly.

His concept - that a large area of space is populated by humans (the mechanism of which I won't go into) - where much of that area has achieved a sort of classless, technological society, where concepts of profits etc have been eradicated in the interest of a mutually assisting, forward looking society, is used to challenge preconceptions in the most surprising of ways.

One area of this human space, which behaves in a way more recognisable as our society - a sort of capitalistic region within the larger, better area, is terribly fearful of change and technology.

Now what Stross does that is so brilliant, is that he throws into this contradictory universe, a mechanism so alien, so inhuman, that both types of human society can't quite understand it. But one of the societies is less able to cope than the other.

To the backward, class-ridden, rigid, anti-technological society, comes a fantastic, all powerful, alien system - "The Festival". In exchange for stories and ideas the "the festival" donates unimaginable technological wonders and the machinary to create more such marvels. A goose that lays golden eggs for a poor peasant, exotic weapons for a bank robbers, palatial homes and so on. Within hours society is on its knees.

If you like Science Fiction, I can't recommend this enough. If you're a radical leftie there are enough in-jokes to keep you smiling, but the book is political enough to make you realise that Stross isn't simply taking the piss. He's also making a lot of interesting points.

EDIT: Stross has made his latest novel, Accelerando, available for free download in a variety of formats.

I read this pretty much concurrent with Charles Darwin's account of his voyages with the Beagle and there are some amazing differences and similarities between the two Victorian tales of travel and adventure. Rider Haggard's novel has been a staple of the boys own adventure genre for many decades now. Its mixture of fighting, exploration and hunting capturing the hearts of many who went on to rule the empire and those that would have liked too.

What is interesting about the book (and its replicated slightly in Darwin's writings, but I'll write more on that when I come to review it) is the casual racism towards the indigenous black people of Africa and South America. Time and again the narrator talks about the inadequacies of black people, their inability to understand civilisation and he despairs at their lifestyles and "simple" ways. Of course this attitude stems from the the ideologies utilised by the Empire builders keen to control the rest of the world. Haggard takes it even further in the sequel when his heroes discover a powerful civilisation in the heart of Africa. The relatively advanced nature of this civilisation has everything to do with the fact that it is a lost tribe of white people.

Furthermore, an amusing side to the explorations is the way everything is hunted and killed. The heroes take time out from their rescue mission to shoot numbers of elephants for ivory, but mostly for sport. Throughout, the characters display a casual indifference to the people, animals and wealth of the country that they are travelling through.

So this book is interesting not in its adventure (though it has all the precursors of an Indiana Jones film) but it the mirror it holds up to a thankfully bygone era when men traveled the world and tried to remake it in the image created by their odd, jaundiced Victorian views.
Posted by Resolute Reader at 10:02 pm 1 comment: