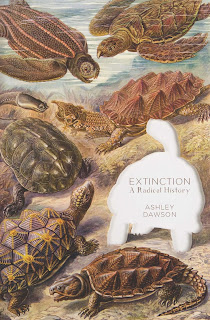 This short book is a brilliant and powerful argument which locates the "Sixth Extinction" in capitalism, and its solution in anti-capitalism. This is an important argument, and one noticeably lacking in most commentaries on the bio-diversity crisis. Elizabeth Kolbert's otherwise excellent and popular book documents the scale of the crisis, but fails to argue that the problem is the system we live under. Ashley Dawson, on the other hand, documents the role that humans have played historically in causing extinction, but argues that the emergence of capitalism has made this far, far worse.


As Europeans subjugated and colonized 'virgin' lands, they dramatically augmented processes of environmental degradation and extinction. The expansion of capitalist social relations through European colonialism and imperialism pushed what had previously been regional environmental catastrophes to a planetary scale. In addition, by transforming nature into a commodity that could be brought and sold, capitalist society shifted humanity's relations with nature into a mode of intense ecological exploitation unimaginable in previous epochs.

The second part of this quote is important, because Dawson argues that it is the commodification of nature under capitalism which, in part,  renders many solutions to the biodiversity crisis as limited, or short term. In an excellent discussion of "rewilding" Dawson notes that the problem with this is that because capitalism is driving a global ecological crisis, rewilding parts of the world can only lead to shrinking islands of nature. But in addition, Dawson also argues that this sort of strategy is also shaped by the needs and perceptions of the developed world. The danger is, that we recreate "European savannas" featuring endangered "charismatic megafauna" and the rest of the world is left to ruin.

The final part of Dawson's book is a discussion about what a radical conservation movement would look like:


An anti-capitalist movement against extinction must also address the fundamental economic and political inequalities that drive the slaughter of megafauna. The extinction crisis should be framed in the context of a new wave of extractivism that is denuding many poor nations, shunting their minerals, flora and fauna to consumer markets in industrialised nations.

In other words, environmental questions cannot be separated from ones of social and economic justice. This means radical demands to dismantle fossil fuel corporations, force the developed world to pay for its pollution and oppose the commodification of nature. But ultimately it means a challenge to capitalism itself. With every day bringing more and more evidence that the planet is on a path towards global ecological catastrophe, and less and less evidence that anything is being done about it, it's hard to fault this revolutionary conclusion.

While Dawson doesn't outline how this revolution will take place - I would argue that only the global working class has the power to challenge the nation states and the multinational corporations - his book is a very important tool in winning people to anti-capitalist environmentalism. As he points out, "the only true conservation is a radical conservation".

"Radical demands" has to be taken in two ways -- the content of the demands must be radical, yes, but so too the ways in which they are expressed. Radical enough to actually make a difference. But then we're getting into the nature of the necessary revolution. Just that place where almost every book of this sort stops short.