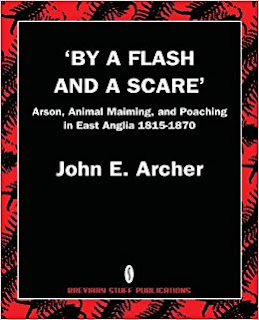 Given the extremely specific title it might be thought that this was a book that would only appeal to the specialist historian, but it is actually a very interesting examination of the intersection of protest and crime among rural labourers in a formative period of English agricultural history. Many readers will be aware of the Captain Swing protests when, in large parts of England's agricultural areas, mass protests led to the burning and destruction of landowner's property - most famously threshing machines. But, John Archer argues, there has been a tendency to see events like Swing as breaks in essentially passive periods of rural life. The reality he shows, is that there was almost continuous protest in rural communities, which at times reached major proportions that threatened social stability, but at others was a continuous backdrop that was at least passively supported by the wider population.

Arson and animal maiming tended to be individual acts - of terrorism, revenge, protest or even crime - but they took place in a wider context of anger and frustration at rural unemployment, underemployment and poverty. Poverty levels were such that in reality there was no "rural tranquillity. What charity and poor relief that did exist often bred discontent and tended to fail the group most prone to protest and crime - young single men. Even those that worked understood the reality of their class position, "we till and sow the land till there is an abundance of food, and our reward is starvation".

When the oppressed and exploited fought back, even on an individual level, they were often cheered on by the compatriots. We know that burning ricks or farm buildings were often left to burn while the locals watched and we also know that poaching was often an activity supported by the majority of the population. Archer quotes Joseph Arch's comment that every second person he met was a poacher. But what this study is careful to show, is that the crime of poaching was also a reaction to a set of economic circumstances. As Christopher Hill and other historians have argued, the criminalisation of poaching has as much to do with the solidification of property relations as it has with protecting animals. Thus the act of killing a deer, or trapping a hare was in part resistance to those relations; as much as the illegal supplementation of diet. Archer also points out that we cannot ignore the sheer enjoyment of hunting that would have affected many participants. These sort of actions were an act of class struggle as much as a necessity in the face of poverty:


The arsonists were the 'loose hands', that is, the casual day labourers who were the lowest paid and the first to be laid off in times of bad weather or falling markets... low wages and unemployment were the most frequently cited grievances by the guilty. The 'flash and a scare' clearly had the dual purpose of raising wages and providing employment for such men. But we should not simply dismiss the incendiaries as the losers in agrarian capitalist society... They may have acted alone under the cover of darkness but their actions were clearly supported by the labour community as a whole before 1851. The villagers shielded them from the law and gloried in the destruction. The fires were lit on their behalf to and advertised their poverty and bitterness to rich and poor a like... The camouflage of deference clearly misled the landed who closed their eyes... to the rural poverty which surrounded them.

John Archer's book deserves as wide a readership as Christopher Hill's Liberty Against the Law or E.P. Thompson's Wigs and Hunters. Full of data and analysis (as well as amusing anecdote - such as the mass cutting down of trees by Snettisham villagers, the culmination of a 44 year feud with the lord of the manor). It helps us understand how rural working people resisted, and the context in which they did so. Highly recommended.