Oliver Rackham - Trees and Woodland in the British Landscape 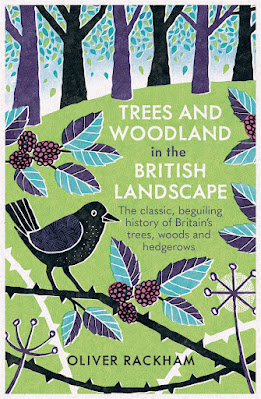 Many years ago I stumbled across Oliver Rackham's classic book The History of the Countryside on a second hand book stall. It was a fortuitous find. At the time I described it as "unusual and slightly odd" but nonetheless a fascinating and important read. The recent republication of Rackham's book Trees and Woodland in the British Landscape prompted me to read more of his work, and again I've been pleasantly surprised. Like History of the Countryside, Trees and Woodland is a systematic exploration of the place of trees in the land - it takes a historical approach, looking at prehistory, Romans and more recent usage of the landscape (such as medieval deer parks).

It is very much a materialist approach. Rackham makes it clear that the position of trees or woodland in contemporary landscape is the consequence of both natural processes and human activity. On the difference between planned and ancient countryside, he writes:

This is one facet of a distinction that cuts deep in European social history from France to Crete. Ancient Countryside, the bocage, is the land of hamlets, of medieval farms in hollows of the hills, of lonely moats in the claylands, of immense mileages of quiet minor roads, holloways and intricate footpaths; of irregularly-shaped groves and thick hedges colourful with maple, dogwood and spindle; and of pollards and other ancient trees. Planned Countryside, the champagne, is the land of brick farmhouses in exposed positions, of flimsy hawthorn hedges, of ivied clumps of trees in corners of fields, of big villages and few roads, and above all of straight lines; it does however, often contain medieval woods, Anglo-Saxon hedges and ancient trees that the enclosure commissioners failed to destroy.

Rackham's is a beguiling style, but his approach is fascinating. Placing human activity, social history in the context of nature. But Rackham warns against seeing trees through an economic lens. He describes how forestry developed in England through continental approaches, which led to a "commitment to plantations" which introduced conifers on a massive scale in Victorian times. Trees became simply associated with wood (and profit). He says

forestry acquired a theoretical basis, and in particular became thought of as a financial operation: it was through possible to predict how much money a plantation would earn and to decide whether to invest money in trees, or in, for example, the stock market.

Sadly such a financial approach continues to be applied to nature conservation and usage today, separating nature off from its history and wider context.

The world around us has been created and shaped, rarely evolved. Rackham's book shows how this is applicable to understanding woodlands, forests, hunting and features like pools, ponds and hedges. At the same time he warns the reader of approaches to woodland conservation that simply see the presence of trees as being a good thing. Trees are part of wider ecological networks - they shouldn't be simply placed, chopped and replaced. As Rackham concludes right at the end:

For native trees the 1980s have been a time of prosperity and recovery. The prospects are good, but education still has far to go. Planting is not conservation, but an admission that conservation has failed. One can be a lifelong woodland conservationist but never plant a single tree. The conservation of woods is not the same as that of buildings: troubles (apart form that of deer) have a habit of getting better, not worse, if neglected. We need to know each kind of tree and how to work with, not against, its natural properties. Conservations is about letting trees be trees, not gateposts with leaves.

Another recent book of Rackham's, his last published before his death The Ash Tree, explores some of these themes more closely through a study of one specific tree. Rackham develops some of the themes here, looking at how conservation isolates trees from their habitats and places them in a worldwide web of ecology and profit. I'll review that book next and I recommend the reader reads it together with Trees and Woodland as they complement each other very well.

Trees and Woodland is a classic study that those trying to understand the countryside will enjoy. It can be read on many levels - as a way of understanding features of the landscape, as well as a polemic about the world around us. It is a lovely book.

Posted by Resolute Reader at 2:57 pm