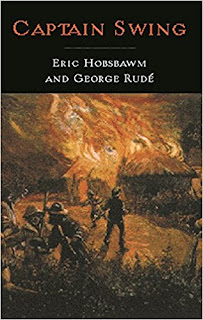 Hobsbawm and Rudé's Captain Swing is one of those books that dominates a particular historical field. Their examination of the 1830 Captain Swing movement was the first attempt to systematically understand the causes of that agrarian revolt and the nature of the movement itself. Written in the late 1960s it was the first real full length account of Swing. Prior to that, only the Hammonds in their book The Village Labourer had paid particular attention to Swing, and Hobsbawm and Rudé are critical of them for underestimating the scale and importance of Swing.

Later historians, in turn, have criticised these two authors, while celebrating the first foray proper historical study into Swing. Carl Griffin's more recent book is possibly the most detailed attempt to surpass Hobsbawm and Rudé, and I'll review that on this blog soon.

Nonetheless those attempting to understand the dynamics of rural capitalism, the nascent workers movement and class struggle in 19th century England should read Captain Swing if only because the two authors bring a sensitivity and eloquence to the history that is seldom seen in writing about this period.

The authors argue that the Swing movement, the largest "machine breaking episode in English history" is rooted in the proletarianisation that takes place in rural England as a result of the changes taking place to agrarian communities. The most obvious change is enclosure, which sets the scene for a transformation of rural society from one geared towards production for immediate use and need, to one where peasant producers become transformed into labourers. Swing is mostly remembered for its machine breaking, particularly the destruction of threshing machines, and hundreds of thousands of pounds of damage was done. But it was also characterised by different phases of destruction - the burning of hay ricks and other property, the sending of letters, the breaking of machines and mass meetings of labourers demanding higher wages and work.

But Swing is more than an economic response to hard times. Its roots in the changing social relations, and decades of failure to address rural poverty, in the context of continental revolution and growing Reform movements in England, make it potentially explosive. Rural poverty was significant. The Speenhamland system which was supposed to help alleviate poverty had been a "millstone" for forty years, Instead of helping the poor, it actively encouraged farmers to pay labourers low wages, placing burdens on the parish that had to subsidise the difference in pay. When Swing explodes then, we see a cross-class alliance between workers and some farmers who both understand that the existing system is wrong. The authors point to a number of occasions when local authorities effectively support the movement, as they see the need to transform the status quo. In particular a large number of farmers allow their machines to be broken without opposition (in some cases doing it on behalf of the labourers) because they can then ask the labourers to also oppose the tithes that they are paying to the parish. In many cases then, wage rises are won, and these are effectively paid for by a reduction in monies to the local parish.

We should be careful though. The authors do not suggest that this is a revolutionary movement - though a few individuals wanted that, and some of the slogans suggest that labourers recognised the nature of their oppression and wanted much larger change. In fact, Hobsbawm and Rudé argue that there was "no subversion of social order" during Swing, rather a desire for a better "regulation" of rural society. But even these limited changes could not be allowed. The government reacted with ferocity and the aftermath of Swing saw the greatest ever repression on a workers' movement in England. 19 men were executed, nearly 700 were transported and almost 2000 workers faced trial.

Hobsbawm and Rudé spend some time exploring what happened to those deported and this is an interesting, if not particularly relevant chapter to the study of the movement. More interesting is the appendix which analyses why threshing machines were being introduced in such vast numbers. The benefits to individual farmers in terms of money saved was minimal, which might explain the acquiescence by many in the face of rioters. But it seems the greatest benefit was that it allowed crops to be taken to the market quicker after harvest. At a time of big price fluctuations this could mean the difference between big profits or breaking even. However once the machines had become common, the benefit was no longer viable for the farmer and the labourers might well be better.

In conclusion there is no doubt that later historians built upon the pioneering work of these two authors. But this book gets across the nature of Swing - a mass movement of workers who wanted to fight for a living wage in the face of government indifference. Their struggles were partially successful, but the nature of their struggle - direct action and mass militant struggle - meant that their fight had been sidelined from the history books in favour of the much more palatable (for the trade union leadership at least) tale of the Tolpuddle Martyrs. Captain Swing was rescued by Hobsbawm and Rudé and any study of the period begins with their memorable work.