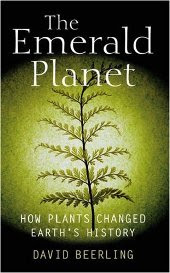 The idea that the humble planet could change the course of Earth's geological history is difficult to imagine. That plants have changed human history is of course easy to believe - imagine how the European world would be without tobacco or potatoes for instance.

But plants have had a much bigger impact - the ability for vast forests for instance to alter the fundamental make-up of the atmosphere may, as David Beerling shows, have been the crucial factor in turning the Arctic of 50 million years ago, from a coolish region, to a tropical one where the precursors of today's alligators slumbered in the heat on river banks.

The role of ancient swamps and forests in giving out huge amounts of greenhouses gases like methane has oft been neglected. Climate models that ignore these factors often can't explain historical temperatures.

Beerling takes us through a fascinating history of the earth, as well as the story of scientific discovery. We read about Scott's polar exhibition that discovered fossils of ancient forests - and the long subsequent debate about why those forests were deciduous. Not having a background in the biological sciences some of the book was harder to follow then elsewhere - but nevertheless the application of the historic studies to current climate science, particularly in the light of rainforest destruction and a warming earth, is something that everyone would be able to comprehend.
Posted by Resolute Reader at 8:28 pm No comments:

Alfred Bester - The Stars My Destination 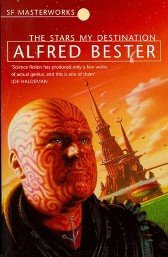 There are few classic works of science fiction written in the 1960s that survive so well into modern times as “The Stars My Destination”. That, in part, must be because at it’s heart it’s not really a science fiction story. It’s a classic tale of betrayal and revenge set in the context of a widely colonised solar system, whose planets are at war with each other.

At the start of the novel, it’s protagonist Gully Foyle is the only survivor of an attack on his space ship that has left him helpless inside a tiny “coffin”, the only area airtight enough to keep him alive. His daily struggle to survive, is interrupted by the arrival of another spaceship, which while it sees his distress flares, pointedly moves on.

This betrayal energises Gully, who with renewed vigour, re-examines his predicament and maguyver like, improvises repairs and lights the engines of his spaceship. Gully’s return to earth, is briefly interrupted by a chance arrival at a spacestation – it’s inhabitants, scavengers of the spaceways, hideously tattoo Gully. For the rest of his life, Gully is scared by the livid stripes of a facial tiger. After surgery, the tattoo disappears, except at times of extreme emotion, making it impossible for Gully to live amongst humans without his identity being discovered.

The rest of the novel is a story of Gully’s descent into madness and his desperate quest for revenge on those who left him to die alone in space. Gully’s rage dominates his character, driving him onward. His anger leads him to treat all who come in his way with derision – rape, violence and murder follow in his path. Even while imprisioned, when he finds true love, his facial scars frighten and betray a brief mental normality.

Much of Gully’s future world is one we woud recognise. Millions live in poverty, while a tiny number of rich individuals lord it over the rest of the population. The central difference with our own time, is the idea of jaunting. Jaunting is the ability to travel around great distances by the power of thought. It has, understandably, fundamentally changed much of human society, while leaving some of societies greatest differences in place.

Jaunting is a fantastic science fiction innovation. This isn’t because it’s a brilliant idea. Many writers have imagined the ability to think yourself somewhere else. In Bester's hands jaunting becomes a fantastic ability that accentuates social differences. Because you have to have been somewhere to jaunt to it, long distance travel remains the presever of the rich. Not everyone who can jaunt, can do so equally, and some poor unfortunates are unable to do so at all. I was particularly impressed by the fact that when instantaneous travel is widely available to all, the rich, to prove their wealth, travel in old fashioned ways. Arriving at celebrity parties by limo, car or carriage is a demonstration of how much money you have, and how much free time you can waste. Sending a letter around the world, when a hired agent could take it there nearly instantansouly, is both insane and a true demonstration of your contempt for the masses.

The tale of Gully’s revenge, and his retribution is a complex and convoluted one. His flawed character is of the great anti-heroes of fiction, and deserves to be read, discussed and enjoyed by many more readers.
Posted by Resolute Reader at 8:12 pm No comments: