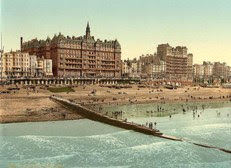 The classic story of the low level gangster trying to break through into the big time has been told many times. Rarely though, has it been told with such a biting cynicism for the human condition. Nor has it been related with such a bleak outlook on a whole town.

The Brighton of the 1930s, so well described in Graham Greene’s classic novel, is a city slowly being swamped by the dreams of those who visit. From the London Day Trippers we meant in the opening chapter – desperately seeking respite from the big city and their dull, boring lives, searching for alcohol, entertainment and love – to those who circle around the visitors on race-day, hoping to make a few pounds to keep their own heads above water, these are by and large a people without hope, with repetitive lives, whose only hope of something better is a lucky break.

The novel has a lot of luck in it – Hale, the unlucky, doomed victim we meet in the opening paragraphs of the book, makes a living from leaving messages in public places on behalf of his newspaper. If he is challenged, his finder wins a prize, as do those who find his message cards. His editor likes him to be found, but occasionally go undiscovered, to save on a few pounds. Sadly, Hales pride in his ability to o the job properly doesn’t allow him to escape his own luck and destiny. He knows, as the opening lines put it, “that they meant to murder him”.

The killers – a small time Brighton mob outfit – have their own dealings with luck. A few coincidences and their ability to get away with the crime will fall apart. Instead, their leader, Pinkie, has to pile crime upon crime, upon murder in a desperate attempt to escape the law. Of course, his own self-belief, means that those around him suffer, and more and more innocents are pulled into this growing circle of bad luck, until the only hope in this ever darker story is a single woman, who herself only met Hale through chance, refusing to belief the official story of his death.

The tragedy of the story is not the individual crimes. Pinkies’ self belief loads the stakes so high that few can escape the final collapse of his plans. The innocent girl he drags into the mess as the story continues escapes almost totally from what has happened. Indeed the reader is led to believe that she has actually, unlike almost everyone else in Greene’s Brighton broken free of the restraints upon her, restraints imposed by class, family and poverty.

The final lines then, “the worst horror of all” aren’t then about her personal pain, nor those of all the victims along the way- it is the crushing of her dreams and the realisation that there is no hope at all, something few of us could really survive.
Posted by Resolute Reader at 4:08 pm 1 comment: 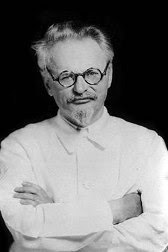 Cliff - Trotsky; Sword of the Revolution 1917 - 1923
Hallas - Trotsky's Marxism
Choonara - A Rebels' Guide to Trotsky
Trotsky - An Appeal to the Toiling, Oppressed and Exhausted Peoples of Europe
Posted by Resolute Reader at 8:33 pm No comments:

Despite what you learn from a childhood watching British war films, or even the potted history of the war you can pick up from The History Channel, World War II wasn't won by the British and Americans invading France - despite the importance of that conflict. Hitler's German was military defeated by enormous sacrifices from the ordinary people of the Soviet Union.

Some of these sacrifices were, to be frank, unnecessary. Joseph Stalin's supreme self confidence led him to underestimate the likelihood of an attack and the country was ill prepared. More of his decisions were suicidal for the people involved - Germany's war machine was to powerful to be even hindered by small group of lightly armed militia. However the method of fighting the war changed, and it is this transformation that is so well documented in Overy's book on the Eastern Front.

Terrified of being challenged in his position, Stalin was initially reluctant to allow the freedom of movement and imagination to his generals. This led to a monolithic response to the German invasion - one that refused to adapt to changing German tactics. In later years, Stalin was prepared to devolve much more control to his generals, and these, in particular Zhukov, proved brilliant at defeating German armies in gigantic set piece battles.

This is a short book, so it is necessarily lacking in details. But it is intended to be a sweeping history of the period, so it doesn't bring out all the terrible defeats. The 900 day siege of Leningrad is dealt with in a short chapter, as is the unbelievable ferocious conflict at Stalingrad. This isn't a problem though, it is a fascinating read - those particular battles are dealt with in great detail in other excellent works.

Overy uses the recently opened Soviet Archives to illuminate his accounts, and challenge other ideas and myths. He argues for instance, that the British and US aid sent to the USSR, was far more important in victory than has hitherto been thought.

Despite the immense victory that the people of the USSR inflicted on Nazi Germany, we shouldn't let this close our eyes to the nature of the dictatorship that led the war effort. Overy documents the torture, murder, massacre and violence at the heart of Russian society. Those of us who have long argued that Russia wasn't a socialist society will not be unaware of this, but for a generation after the war, Russia's victory was further evidence of the socialist nature of its society. That said, no one, least of all the Germans expected Russia to triumph. Overy quotes the American Secretary of War as predicting that "Germany will be thoroughly occupied in beating Russia for a minimum of a month and possible maximum of three months."

The true cost of Russia's war cannot really be comprehended. The figures are almost incomprehensible - here are a few to illustrate the point. "Stalingrad cost the lives of 470,000 soldiers and airmen. The battle of Kursk was won at a cost of only 70,000 dead." Kursk was the largest tank battle of the war - 600 German tanks faced 850 Soviet ones. Half a million Soviet civilians died from bombing raids during the war - ten times the number that died in the London Blitz. In probably the worst siege of the war, that of Leningrad, Overy estimates that over a third - more than a million people - of the pre-war population died.

While this is an excellent history of the war, it is essentially a military history - the background chapters were Overy deals with the Russian Revolution and civil war are much weaker, particularly his peculiar way of examining Trotsky simply as a military hero, who simply "lost interest" in military matters once the civil war was won. This isn't surprising. Trotsky was a revolutionary leader, not a military general. His leadership of the Red Army was based on the need to defend the revolution, rather than a particular desire for military glory. These small criticisms aside, read this book to understand where the cold war came from and to try and comprehend the cost of the greatest military clash of history.
Posted by Resolute Reader at 11:03 am 3 comments: