'Kill all the Gentlemen' 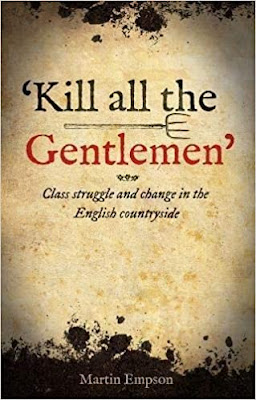 'Kill all the Gentlemen': Class Struggle and Change in the English Countryside is my second book. It is a history of the rebellions, uprisings, protests and strikes that have been part of the changing countryside. From 1381's Peasant's Uprising, through Jade Cade's revolt of 1450 and Robert Kett's Rebellion of 1549 to food riots, anti-enclosure protests and the birth of agricultural trade unionism.

For seven centuries the poorest people in the countryside organised to protect their lands, rights and communities. Their stories are told in 'Kill All the Gentlemen' as well as what these struggles meant for the countryside.

'Kill All the Gentlemen' can be purchased on online direct from the publisher/bookshop. I hope you'll support Bookmarks who are an independent, left-wing, socialist publisher and the official TUC bookshop.

“When politicians and pundits talk about ‘the economy’ and ‘the market’, what do they really mean? The tenor of debate usually implies these are naturally occurring elements, as unchangeably ‘there’ as the sky above us. This is, of course, one of the greatest cons of our times. Our economic system was created—decisions made and battles fought over the course of centuries brought us to this point. British history is in fact one of unceasing class struggle, as the often voiceless majority fought for justice and equality against a powerful elite. Our taught history covers only isolated incidents—selected revolts and strikes—in what has been a continuous process. Empson seeks to redress the balance and concentrate on the full sweep of the history of rural class struggle.

His book is an essential read for anyone interested in how we, as a nation, arrived at this place of inequality and social division, how it could have been avoided and what we can, and must, do about it.” — Dr Louise Raw, historian and author of Striking a Light: The Bryant and May Matchwomen and their Place in History

“The history of the ‘common people’s’ struggle for control of their land and labour has fundamentally shaped our world. Martin Empson’s account takes the long view of how this has played out in England, in the process bringing out the continuities and variations in patterns of rural protest past and present.” — Matt Clement, author of A People’s History of Riots, Protest and the Law: The Sound of the Crowd (2016)

“Highly readable—this book weaves together a tapestry of uproar spanning over six centuries.”
— Josh Sutton, author of Food Worth Fighting For: From Food Riots to Food Banks

“This is a valuable overview of the rural worker’s long fight against economic oppression. It will help to clarify the fact, not always recognised, that the struggle of the wage labourer began in the fields, not the factories.” — George Yerby, author of The English Revolution and the Roots of Environmental Change

Bernadette Hyland reviewed Kill All the Gentlemen on her 'blog Lipstick Socialist. She said that it "reminds us that class conflict did not start with the Industrial Revolution and urban struggles. In this well researched history he begins with  the Peasants’ Revolt of 1381 and then  take us up to today’s globalised food market, where in the UK  few people now  work on the land and most of us are alienated from the process of food production."

Writing in Socialist Review magazine Colm Bryce said "Martin shows how sometimes the slightest change, the imposition of a new tax to pay for England’s wars or the reduction of wages following a bad harvest, could make life unbearable for vast numbers of people, who could then be drawn in to open revolt against their lords and masters. He also shows how a crisis could suddenly reveal the weakness and vulnerability of the ruling class.... This is a magnificent and badly needed book that grounds the fight for a better society today in a deep understanding of history and deserves a wide readership."

Graham Mustin in International Socialism Journal 159 wrote "Kill all the Gentlemen puts class struggle back at the centre of the history of rural England. It is accessible to the reader who has little or no knowledge of the events covered as well as being a valuable contribution to scholarship on the subject. Few contemporary historians would be capable of producing such a wide-ranging work that identifies how the process of change occurred and how inequality and exploitation were resisted."

In his review for the online journal Climate and Capitalism Ian Angus said, "Bertolt Brecht wrote, “Hungry one, reach for the book — it is a weapon.” Kill All The Gentlemen is indeed a weapon, one that deserves close attention from everyone who wishes to be well-armed for the struggles ahead."

Ahead of the 2018 Labour Party conference Mark Perryman wrote a recommended reading list on Philosophy Football for Labour members and supporters. He wrote that "Space, the nation, is of course a contested place, none more so than the histories that frame our present. Kill All the Gentlemen is the chilling title not of a murderous thriller but Martin Empson’s rather excellent history of the class struggle, sometimes violent, that has shaped the English countryside, a classic of the ‘hidden from history’ genre."

In the centenary issue of Unite's Landworker magazine Mark Metcalf writes "Empson examines Jack Cade’s 1450 revolt, Kett’s Rebellion in 1549 and ongoing struggles against enclosures that deprived the poor of common land on which to fatten their  livestock."