Eric Ambler - The Mask of Dimitrios 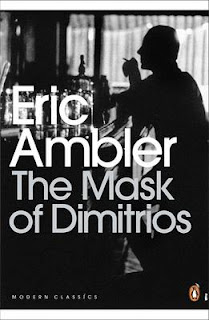 This is an unusual crime thriller. It follows an unlikely hero, Charles Latimer as he crosses Europe trying to get discover the full story of the mysterious Dimitrios. Latimer is a crime novelist, and on a trup to Istanbul he is taken by a fan - a senior policeman to see the results of a real crime. This is the body of Dimitrios, now at the end of a long life of crime, doublecrossing and violence.

As he listens to the somewhat patchy life history of Dimitrios a fire it lit in Latimer, who decides he will attempt to find out who this man really was. So starts a trip of discovery that brings Latimer into the dirty underbelly of interwar Europe.

It's a fine novel, not particularly challenging and there are some fairly obvious twists that pop up from time to time. But the descriptions of the cafes, bars and brothels are what makes the novel. Amber has a nice writing style that means he recounts every part of Dimitrios' life differently. Once it is in the form of a letter that Latimer sends containing details of his meeting with someone who knew the man. Another time it's a conversation recounted or a flashback from an old lover.

Clearly this is the forerunner of the more modern "thriller". But it is worth reading not because of this historical interest, but because of the beautifully portrayed, dark and dangerous criminal underworld that we can imagine surrounds our more mundane society.
Posted by Resolute Reader at 10:17 pm 3 comments:

The idea that market mechanisms are the solution to our climate crisis might be considered dangerous in the light of recent economic events. Yet Carbon Trading and other related projects are at the heart of international strategies to deal with the environmental situation we are in. Thus this accessible and detailed examination of the economics behind such schemes and their impact on the world is both timely and important.

Carbon Trading schemes arose out of the Kyoto agreement in the early 1990s. They're based on the idea that you can offset or mitigate emissions of pollutants in one part of the world by balancing them out with projects that reduce or prevent emissions elsewhere. In an excellent essay, Larry Lohman of the Corner House institute points out that such creative accounting has been responsible for everything from coal mines to gas powered power stations being built.

The problem is, that "climate change isn't simply a numbers game". No matter how careful the accounting, offsetting schemes don't allow for other impacts - the eviction of families from land that is intended for tree planting. The problems of time - your offset scheme might allow you to carry on generating electricity by burning coal, but it may take 100s of years for the low energy light bulbs you've paid for to negate the emissions. The schemes are of course open to corruption - with numerous individuals running companies based on them, previously having been involved in pushing the legislation through. The longer term problem though, is that such schemes don't reduce emissions and they end up justifying the status quo.

Where is the incentive to invest in renewable energy if you can simply cancel out the pollution from your coal plant? Why move to more sustainable housing or transportation if you can mitigate the effects of existing practices by spending money elsewhere. Such creative accounting hasn't reduced emissions, but it has led to some very shady companies making large amounts of cash.

If I have one criticism of the book, it's that the alternatives don't match the scale of the problem that is outlined so well. 90% of the book is a critique of market mechanisms, and by extension, the capitalist system that produces them. With this in mind, simply offering small enclaves of sustainable housing or better biking practices isn't enough. As some of the essays point out, we need investment in zero carbon energy and non-fossil fuel based technologies as well as powerful social movements to force governments into action.

But this is a minor criticism. The vast bulk of the essays collected here will be extremely useful to those who want to argue that we have to change the world to save it.

CTW - The Carbon Neutral Myth, Offset Indulgences for your Climate Sins
Posted by Resolute Reader at 11:58 pm No comments: 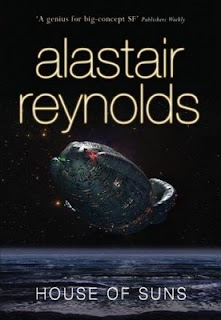 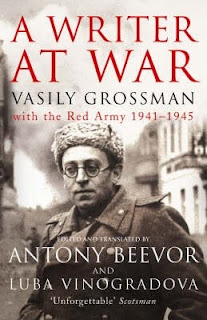 (Edited and Translated by Antony Beevor and Luba Vinogradova).

Since reading Life and Fate, I've been waxing lyrical about it to anyone who will listen. So it was a great pleasure to be given this book which gives a much deeper back ground and understanding to the experiences that led Grossman to write Life and Fate.

The invasion of the Soviet Union by the Germans in 1941 was a great shock to many. Vasily Grossman immediately tried to join the Red Army, but was deemed unfit for service. Given the life expectancy on the Eastern Front, this was lucky for us, as Grossman instead became a special correspondent for one of the leading Soviet newspapers. His experiences with the Red Army were documented in short notes, and these extensive notes form the basis for this book. Time and again I read little notes that reminded me of bits in Life and Fate (and, the editors tell us, often make it into other Grossman novels).

Grossman found himself at some of the crucial moments of military history. He retreated in the face of the seemingly unstoppable German armies as they threatened Moscow. He was in Stalingrad even before many realised how significant the battle was likely to be, and he followed the Russian armies towards Berlin, via the appalling horrors of Treblinka. At the end of the war, after documenting atrocities against the Jews, he found himself in Hitler's bunker, and helped himself to a few pieces of paper from the dictator's desk.

Having read Life and Fate first you see just how much of Grossman's experiences and interviews make it's way into the novel. In fact, for me, it underlined just what an important book the novel actually is. It's more than simply a work of fiction, it is a historical document in it's own right.

Some of what Grossman noted didn't make it into print. In fact lots of it wasn't intended to be in print. Grossman's desire to record accurately what went on, wouldn't have fitted with Soviet propaganda all the time. Records of desertions, collaborations or retreat didn't sit well with the official portrayal of the Red Army. But even these short quotes show why he became loved by many ordinary soldiers - he could describe the realities of war far better than any one else. His notes are full of soldiers honesty and humour.

"A soldier who had been a prisoner of war during the last war looks at a diving plane: 'Must be my lad bombing,' he says.

But the grim reality of war shines through.

"Pilots say: 'Our life is like a child's shirt - it's short and covered with shit all over.'"

For Grossman, the war meant personal tragedy. His mother never escaped from the German's and as a Jew, was massacred. This means that his documentation of Treblinka must have been even more heart rending for him. Though is account of that concentration camp is accurate and detailed enough to have made it important evidence at trials after the war's end.

Grossman comes across as a brilliant writer, but he was naive till the end. Despite his popularity, his writing couldn't become public. His honesty about ordinary people was too dangerous for the soviet machine. He died, never knowing that his greatest work would ever become public. That is a tragedy, but Antony Beevor and Luba Vinogradova have done his memory a great service by bringing Vasily Grossman's notes to light.