This is a superb book. Rarely do I come away from reading a non-fiction book feeling as satisfied as I did when I closed Stuffed and Starved.

Raj Patel has produced an amazing investigation of the problems with the world's food system. Starting from the very bottom - the men and women who produce the world's food, he shows us a system that has become dominated by multinational interests, profiteering and ruthless capitalist actions. The consequences are impoverisment, soaring suicide rates amongst farmers, unemployment and food that is geared to maximising profit, rather than improving diets.

We see the ruthlessness of the seed companies, forcing and tricking farmers into using GM seeds. We see the power of the supermarkets determining what must be grown, despite what is best for the farmer. And finally we see how this comes together in a world food system that creates hunger in the midst of plenty, and simultaneously obesity on a mass scale.

Patel is rightly cynical about the multinationals being able to solve these contradictions. He points out how supermarkets for instance rebrand themselves to appeal to an era when more and more people are worried about what's "behind the label". Yet in a system where the problem is agribuisness as a whole Patel doesn't believe that this sort of reorientation of the food giants helps.

"To turn agribusinesses loose on organic food is to legitimate their rule, to concede that no kind of food system is possible without their participation, just as to choose between high-pericide farmaing or GM farming is to admit that, either way, the pesticide companies are a part of our food system. But there have always been alternatives."

It's when Patel is looking at the alternatives that things become really interesting. He discusses various food co-operatives, or shops aimed at bringing local, cheap, healthy food to communities. Pointing out that when people to have access to decent food it is very popular. (He also makes the point, having discussed how supermarkets destroy such local shops, that were supermarkets don't exist at all, were there is no easy access to food, obesity shoots through the roof as people survive on a fast food, high fat, high sugar diet).

But at the heart of Patel's argument is that its a lack of control over the food production process that is the fundamental problem. He shows how things improve once people start to take control of their lives - the MST in South America, creating collective farms based on solidarity for instance - but what is true in rural societies is also true of those of us living in towns.

"If the quality of food we eat is shaped by work and play, by the neighbourhoods we live in, the jobs we can get and the time we spend travelling between them, then we might want to consider poor diets as a symptom of a systemic lack of control over our spaces and lives."

Such a conclusion can only serve to underline the argument that if we are truely to improve our lives, then fundamental social change must be part of the solution.
Posted by Resolute Reader at 11:50 am 1 comment: 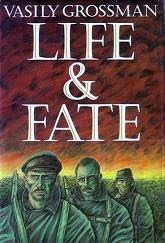 Few countries have a history that really allows for novels on an epic scale. France is of course one, with its revolutions and Commune, dictators and dynasties. Russia is another. Partly for similar reasons, but more importantly I would argue, because it is in Russia, more than any other that the fate of entire nations was bound up in the actions of ordinary people.

Life and Fate is an truly epic novel - my edition is just over 870 pages long. I'd go so far as to say it's one of the greatest ever written. In some ways it is a simple story, dealing with the changing fortunes of war. But the battle at the heart of this story - the Siege of Stalingrad - is the most epic of engagements and history depended on its outcome.

Life and Fate has a cast of hundreds. Some come and disappear rapidly, as is the nature of war. Some mark time, and their tale illuminates some great aspect of Russian history. Viktor Pavlovich Shtrum is one. A physicist of enormous talent, his Jewish background and his enthusiasm for Einstein's science no longer plays well in the growing anti-semitism that Grossman has characterising the later years of the Second World War in Russia. Shtrum faces professional and personal destruction as he refuses to give in to his tormentors. He is saved by the intervention of Stalin. Not from any magnanimity, but from the state's growing realisation that nuclear power will determine the next stage of the world's history.

But Shtrum's part in this novel isn't simply there to show how the changing world impacts individuals. His love for a colleagues wife, despite his own wife's support and love demonstrates that in the midst of the darkest hours, what we are as individuals never disappears. At a time when millions of men and women are dying nameless deaths, Grossman creates a cast of ordinary men and women fearful for their lives, their loved ones and their future.

The darkest moments in the novel deal with the Holocaust. We are taken along on a forced march, as Jews from a Ghetto are taken to Auschwitz. Separate from the main characters paths, but inseparable, the deaths are heart rending, forming the backdrop to the war in the East. Underscoring the peculiarly viscous conflict in Russia, the chapters that deal with the Holocaust serve also to show how Fascism didn't arrive simply with the idea to gas six million Jews. But how this was the inevitable outcome of the bureaucratic state based as it was, on vicious anti-Semitism.

There's much more to the novel. The stories of the men and women trapped under siege in Stalingrad are fascinating. Here in the intense, dirty conflict, barriers break down. Ranks become less important than fighting as a cohesive unit. Old Bolsheviks clash with superiors who hate the idea of a non-hierarchical army. Tensions and rivalries led to denunciations and accusations. Perhaps this isn't surprising but the way that Soviet society is opened up and exposed is incredible.

Of course, as in any war, the suffering and pain is horrific despite the ideals that people fight for. Here the novel really comes into its own. This little brief description of the situation of some of the German troops as they starve following their encirclement by the Russians.


The talk turned to food and everyone grew more animated. First they discussed the best way of getting rid of the smell of sweat in boiled horsemeat. Some said you just needed to scoop the black scum off the top of the boiling water. Others said it was important to simmer the broth very gently; still others said you should only use the meat from the hind-quarters and put it straight into the boiling water while it was still frozen.

Here we have the extraordinary made ordinary. Soldiers who had several months previously been at the forefront of a seemingly unstoppable forward march, reduced to scrabbling around for food.

Some reviews I've read - including the awful analysis of the novel that passes for its Wikipedia page - have this as an anti-communist novel. I think it's the opposite. Certainly it does nothing to defend Stalin or the state he created. But it is a celebration of ordinary people. A celebration of people's ability to survive the worst that they can imagine and come out fighting. It is a celebration of solidarity and survival and in its description of the ideals of the Old Bolsheviks, as well as the defeat of Hitler by millions of ordinary Russians, its a reaffirmation of the ability of the nameless masses to change the world.
Posted by Resolute Reader at 8:40 pm 1 comment: