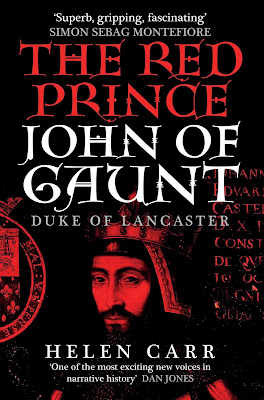 During the Peasants Revolt of 1381 the masses who marched on London targeted a number of buildings and individuals whom they identified with their exploitation. Particularly greedy or oppressive landlords had their homes and businesses destroyed. In London, law offices near Lincoln's Inn were attacked, and individuals like the Chancellor "Hob the Robber" were hunted down and killed. Anyone associated with the poll tax, or other assaults on the poor, was in fear for their life. But the biggest act of destruction during those days of class war was the burning of the Savoy Palace near the Strand.

Why did the rebels target the Savoy? Was it simply because of its opulence? While the Palace was indeed magnificent and filled with treasures, it was targeted because it was the principle residence of one of the richest men in England, John of Gaunt - the Duke of Lancaster. It is notable that contemporary accounts of the destruction show that the protesters punished looters. This was not a free for all riot, but a systematic attack on the wealth of an individual who was hated by the masses.

Today Gaunt is a neglected figure. But in 1381 John of Gaunt was a well known, and highly infamous figure. The rebels associated him with the introduction of the Poll Tax, but he was also hated by Londoners for his attacks on Church figures and his contradictory role at court. Gaunt was wealthy beyond imagination, and the heart of the network of power that extended from the royal household. A son of Edward III, and key figure in government during Richard II's minority, Gaunt was also a military leader in the Hundred Years War and even a claimant to the throne of Castile. The rebels targeted the Savoy out of hatred for Gaunt, but also because he symbolised more than almost anyone else what was seen as the corruption at the heart of English society.

The fact that Gaunt played such a crucial role in the second half of the 14th century, yet remains relatively unknown, means that we should be very pleased that Helen Carr has written this new biography. She tells us that only two previous biographies exist, one of which dates back to 1904. This handsomely produced and very readable book certainly fills a gap.

It is a feature of medieval peasant revolts that rather than blame the monarch for social problems, they thought that he was surrounded by corrupt and greedy ministers and advisors. This was certainly the case for John of Gaunt who was popularly believed to be keen to depose Richard and place himself on the throne. Whether this was true or not, and Carr's account convincingly argues that Gaunt did not want the kingship, the lower orders hated him. Luckily for Gaunt he was out of London in the North during the revolt.

Gaunt regularly travelled north to manage his estates, but also to lead peace negotiations with the Scots. Despite Gaunt's position in different factions at court, he was regularly entrusted with these and other diplomatic negotiations. Carr skilfully describes the various roles that Gaunt plays through his life - statesman, military commander, castle builder and so on. But she excels in unpicking the complex factional disputes that led to Richard II's eventual downfall and the usurpation of his role by Henry Bolingbroke, John of Gaunt's son. Gaunt himself seems to have been loyal to the throne, yet Richard's increasingly tyrannical rule eventually led to the Lords Appellant challenging him. Eventually Richard's renewed strength led him to exile Gaunt's son Henry and on Gaunt's death confiscate his land and wealth. The scene was set for Henry's return and a rebellion that overthrew Richard.

Carr's detailed account tells this complex story well and newcomers to the period will not find themselves lost. Gaunt's life is told as part of a longer story, rather than a self-contained whole. This is, to be fair, certainly how Gaunt would have seen himself - part of a longer historical story within which he, like the Lancaster line in general, had a key role in maintaining the status quo.

That said, Gaunt's life is one that certainly does deserve an accessible biography. Despite the historical distance and relative scarcity of historical resources Carr draws out both the personal and political aspects to Gaunt's life. I found myself quite moved by the accounts of Gaunt's two marriages and his long, adulterous, love affair with Katherine Swynford during his second marriage to Constance of Castile. His break with Swynford and their reunion after the death of his second wife  tells us a great deal about Gaunt, as well as love and marriage (romance rarely being associated with elite wedding's in Gaunt's time) in the period.

Regular readers of this book blog will know that I tend to prefer "history from below". But in our enthusiasm for history that is more than that of "kings and queens" we cannot neglect the role of individuals at the top and bottom of society. Gaunt's life epitomises the role of powerful men in the medieval era, and his actions helped shape the lives of thousands of men and women. These masses however only make it into this book when they rebel - we learn little about their role in helping Gaunt and his family live their lives of luxury. That said, Helen Carr's new biography is both an interesting and entertaining account that illuminates the machinations at the top of society in this chaotic period.