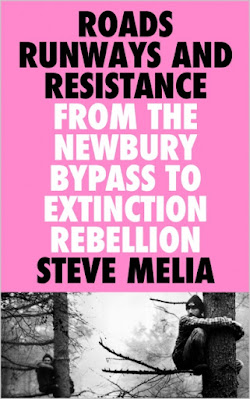 Steve Melia is that marvellous combination of an academic who gets their hands dirty as an activist in their specialist arena. As a lecturer in transport and planning he is also involved in the environmental movement and, most recently, has been one of those arrested during Extinction Rebellion's protests.

Roads, Runways and Resistance is an interesting book. I was was looking forward to it because I wanted to know more about some of the struggles that took place in the UK around the road-expansion program in the 1990s. This followed Margaret Thatcher's government's announcement of the "biggest road-building... since the Romans". Readers may recall the tunnels built to stop Newbury Bypass and tabloid obsession with environmentalists like Swampy who used them to stop, or slow, building work. These direct action camps, and later ones against airport expansion in places like Heathrow and Manchester, have a mythical place in the history of the British environmental movement. So I was keen to see what Melia made of them.

Melia doesn't limit his book to the protesters. In fact the protests he covered aren't those that are just from the, loosely speaking, environmental left. Rather he looks at "resistance" to government transport policy and this includes those, like those who protested fuel tax in the early 2000s and congestion charges slightly later, that might more easily be described as coming from a loosely centre-right, small business, middle class, position. In between these stories Melia tells the weaving story of government transport policy as changed under the impact of protests, public opinion and growing awareness of the environment.

The book is based on numerous interviews. Many of these are with protesters, some with politicians (local and national) and others affected including residents, security guards and planners. It makes for an entertaining, if slightly eclectic book. I particularly enjoyed the accounts of the camps - not least for the brilliant way that they ran rings around the police, security and building companies. Melia touches on less savoury aspects too - the violence of security guards and police infiltration.

What Melia tries to do though is analyse how successful these movements where. Here he is perhaps more controversial that many in the environmental movement might like. His conclusion is actually surprisingly negative:

Public opinion was crucial to the growth and successes of the protest movements in this book. Several of them tried to achieve their goals more directly but none of them succeeded. Obstructive direct action did not stop the building of any roads or the expansion of any airports once construction had begun. It is unlikely to stop the construction of HS2. An upswell of public concern about climate change propelled XR's growth but the disruption caused by XR has not compelled the government to negotiate, although some members still hope that it will. The fuel tax protestors come closest to achieving that aim but their short-lived action achieved only modest gains at the time and their movement rapidly disintegrated.

Melia highlights however that all the movements transformed public opinion, though this is much harder when major political forces or financial resources are "at stake". But he says his book shows that "protesters can make progress, even against those most difficult issues, although counter-pressures are likely to return once the movements recede."

The parts of the book on transport policy explore what Melia calls the "wider tension between the growth of human activities and resistance to their most damaging impacts". Melia argues that we are in a dangerous place environmentally and as such "we have run out of time for ideal solutions". Thus he proposes a series of transport policies that can reduce emissions rapidly, but will be acceptable to public opinion. Unfortunately he explains:

Although the small world of transport planning has woken up to the climate emergency, the big decisions at national level are still moving us in the wrong direction. Road-building and airport expansion remain key battlegrounds where the fight against climate change and destruction of nature will be won or lost.

I think Melia is right to highlight the urgency, and the key battles over transport. But I was troubled by the slightly contradictory message of the book. Melia argues that public opinion is key, and that can be shaped by protest movements. But he is wary of movements (such as XR) taking more radical positions that might lead to what he calls "national political cleavage". These positions might be to take an "anti-capitalist" position. The argument goes that this will alienate people on the right and reduce the impact of movements. It should be said here that Melia is not a fan of capitalism, and on XR's internal debate about a "fourth demand" that highlights issues of racism etc, he is clear that this should be incorporated.

But I think there is a danger in the strategy of focusing on public opinion. This is inherent to XR's politics - the belief that if we win over a certain amount of the population then change is almost inevitable. But the lessons I took from the struggles described by Melia was different. I learnt that the most successful movements were ones that combined radicalism with unity between different forces. The larger the movement, the more united, and the more prepared it was to use a multitude of tactics, then the more successful it was. But crucially what was needed was economic and political muscle, and the force that has this within capitalism - the working class - was entirely absent from almost all of the movements Melia describes. Protest isn't enough - we need to put sand in the gears of the system - and that can be done, most effectively by the workers. Oddly enough the best example of this - the blockades of refineries by lorry drivers - actually demonstrates the power that the workers in those places have to stop the system dead.

So I thought there was something missing in the book. This was the way that protests can inspire - and shape - the sort of movement that can make "ideal" solutions real. This is why socialists in XR and the climate strikes has argued for reaching out to the trade union movement, not as another "group" but as one that has social weight. There should also be blame. The absence of the unions and workers organisations from the protests in Melia's book is not the fault of environmentalists. Its that of union leaders who have avoided participation - despite the frequent interest of rank and file members.

These political points aside, I did enjoy Steve Melia's book - the history is interesting and at times inspiring. There are many lessons to be learnt here and I think environmentalists and socialists will find much of interest. His history of British transport policy is unrivalled. The key question though is "What is to be Done" and I didn't think the book's conclusions were adequate.

Chenoweth & Stephan - Why Civil Resistance Works
Extinction Rebellion - This is not a Drill
Klein - This Changes Everything: Capitalism vs the Climate
Angus - Facing the Anthropocene
Malm - Fossil Capital

Posted by Resolute Reader at 7:05 pm