Jules Verne - Master of the World 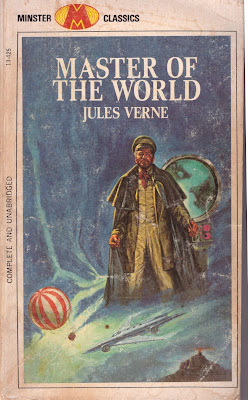 This is a odd little book. Readers familiar with Jules Verne's work will know that he specialised in adventure novels that often showcased fantastic travels through unusual places. This however is slightly different in that it follows attempts by John Stock, a head investigator in Washington's Department of Police as he tries to track down a mysterious vehicle that has been terrorising areas of the United States.

Through a mixture of Stock's own accounts, newspaper clippings and letters we learn that the vehicle, capable of travelling at fantastic speeds on the roads, water and underwater (as well as later in the air) has actually been built by a unknown figure calling himself Master of the World. Interestingly, given the period it was written and published, the Master refuses all financial offers to make his amazing vehicle available to the US government. Several newspaper columnists acknowledge that it would give the country and advantage over the "Old World".

The novel reads like it was written to be a 21st century super-villain book. Stock follows the Master across the country, and the vehicle, now identified by the improbable name "The Terror" shoots back and forth, escaping road blocks and destroyers sent to stop it. In the end, Stock is captured (for no apparent reason other than to move the plot along) and he learns the identify of the Master. Here the novel begins to defy comprehension - the Master turns out to be an extremely famous figure who had built a heavier than air vehicle a few years back and engaged in an extremely public showdown with aeronautical critics. The reader remains perplexed that this could have been forgotten as the premier policemen in the country struggle to imagine who could have built The Terror.

It turns out that this is the second volume of two books - the first offering a sort of origin story for the Master. I wondered, as I read on, whether Verne had intended these to be published together or as a series. Either way, the book reads incredibly superficially, and the Victorian melodrama is not enough to make it a classic. That said the book clearly influenced a whole generation of writers and it is not hard to see in The Terror a few future super vehicles, like the Batmobile or perhaps the Thunderbirds. A short quick read from the earliest days of the science fiction era.

Verne - Five Weeks in a Balloon

Posted by Resolute Reader at 9:35 pm