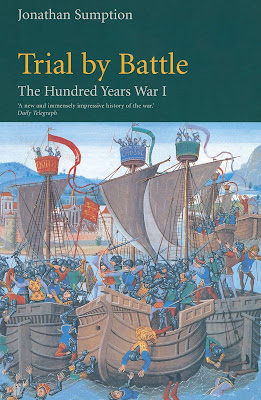 Trial by Battle is the first book in a multi-volume epic history of the Hundred Years War between France and England. It's a detailed historical work, based almost entirely on original sources of which the author is an acknowledged master. At nearly 650 pages long, including end-matter, the book is a hefty read, yet covers only the first part of the war - the feudal conflicts that gave rise to the sustained war and the first years. The reader is taken as far as the Battle of Crecy and the capture of Calais by the English.

Out of necessity, much of the detailed history of the 14th century covers the deeds of great men and a handful of great women. These tended to be the things that were recorded by contemporary chroniclers. So I was pleased to discover that Sumption has not written a history that simply covers palace intrigues, battles and acts of chivalry. Instead, as far as he is able, he draws out deeper historical processes and lesser considered events. For instance, a great theme of the this book is the way that the War was shaped by the difficulties that the two principal kings in the period, Edward III and Philip VI had in raising cash. This is a recurring issue for both, though a real problem for Edward who was trying to fight abroad. It affected everything - from numbers of troops to the alliances that Edward made.

In part, the problem of ready cash was simply about the economic hardship that followed years of war, and the reticence of the lower-orders to stump up taxes. More deeply it was a problem that had roots in wider economic problems. As Sumption points out for France:

One of the things, however, which almost all of the nobility had in common was that they were encountering mounting financial difficulties from the second half of the thirteenth century onward, difficulties which were mainly attributable to the problems of the French agricultural economy but which the government exacerbated. The pressure on them came from several sources. In almost every case they suffered from a sever and continuous rise in their cost of living.

The problem for the wealthy was profound, but for the "lesser men" it was far worse. The implications of economic difficulties and changes played out across the continent. In Flanders where a nascent capitalist wool and cloth trade was closely linked to English exports and French agriculture, the masses led proto-workers revolts that allowed Edward III to drive a wedge between them and their traditional French lords.

Added to this were complications of geography and history. Today, in an era where international politics is dominated by the nation state, its hard to understand how different things were in the 14th century. England and France were much more nebulous concepts. Bits of the area that is now known as France were considered English and the people there had somewhat ambiguous relations with the government. As Sumption reminds us

Between Brittany and England there were ancient connections which made the dukes uncertain friends of France for all their exalted status in the French peerage. It could scarcely have been otherwise, their geographical situation being what it was.

Sumption doesn't point it out, but this worked in the other direction to. Cornwall, which had close economic, language and cultural ties to Brittany, had loser ties to London - a significant factor in the 1497 rebellion against Henry VII's government. But these links meant that rulers in 'England' could legitimately claim rights to huge chunks of 'France' in ways that seem impossible today - and various local lords might change allegiance depending on how the wind was blowing.

Edward III's relations with the ruling classes in Flanders ebb and flow through the book based on economic and military changes. Philip VI's own fortunes are buffeted by similar issues, though he is less flexible from a military point of view. In part this must be because by mid 1340s Philip is forced to keep an eye on three areas of potential military strife, Gascony, Brittany and the Normandy area where Edward is likely to invade.

But it is also because he has a inaccurate view of how Edward III's fortunes have changed. The early years of the Hundred Years War are dominated by ineptitude on the part of Edward whose financial problems undermine his ability to fight freely. But by 1340s these have been partly overcome, and the English have developed their own military skills. Sumption argues that the English had gone through a "military revolution", in part because of the associated wars with Scotland.

After 1327 the "whole [English] army was paid wages, from the principal earls downwards... They fought together with their friends and neighbours, sometimes year after year in the same retinues... The retainers of the nobility were no doubt less diligent, but it is clear that they contributed a great deal to the progressive militarization of English provincial life during the 1330s. War became another field for the elaborate web of interest and obligation which bound their world together."

The debacle for the French at Crecy has much to do with the skills of the English longbowman, but also the way that an underprepared Philip was forced into fighting by public pressure and found himself engaging with a new type of fighting that the French were not prepared for.

The length of this book, and no doubt the whole series, allows Sumption to draw out how these factors play out. One of the great strengths of the book is that Sumption can paint a very broad picture of the context and then zoom down to details of a particular battle or siege and show how these play out.

I noted that many histories of the Hundred Years War rely on retelling the tales of kings and battles. But Sumption repeatedly notes how ordinary men and women were affected, and on occasion shaped events. I was particular surprised to see that on several occasions during the struggle for succession in Brittany, when rival lords fought to be king, and different sides were backed by the French and English, ordinary people refused to allow their towns to be placed under siege. Either forcing the commanders to parlay, or simply opening the gates up themselves. It meant that there was a tendency for the French to blame the lower orders for their failures in battle - but also demonstrates that there was as "mass politics" that is often neglected in historical accounts of the Middle Ages.

This mass politics were shaped by wider forces. The successes of the English in 1345/6 led to a groundswell of support for the war that made raising cash easier. The opposite happened in France as people refused to pay taxes or demonstrated "indifference" to events. But even before this there was little active hostility to the war, with "muted" resistance to English drive to recruit troops. This would change later, with the war weariness and resentment of taxation playing a role in the Peasant Rebellion of 1381, but by the end of the period covered in this book, Edward III and his ruling class could look confidently towards the future.

Having said this, I feel I should warn my left-wing readers that Sumption hasn't written a Marxist history of the Hundred Years War, or even "history from below". In fact I am sure he would recoil at any such suggestion. Readers wanting more on this aspect of the history might be interested in David Green's The Hundred Years War: A People's History. Nonetheless this is a honest and far-ranging history of the period which tries to cover every aspect of the conflict in the years covered. I look forward to reading the following volumes and recommend it to people interested in knowing more about these 14th century wars and the context in which they took place.

Posted by Resolute Reader at 5:42 pm