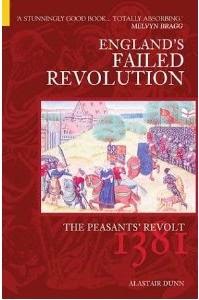 Having reviewed a number of books on the 1381 uprising (see links below), I won't spend time in this review detailing much detail of the actual Peasants' Revolt. Suffice to say, that Alastair Dunn's book is one of the best introductions to the uprising that I've read.

Dunn begins with a succinct analysis of the causes of the revolt and the nature of medieval society. This is a society which entirely rests of the hard labour of the peasantry, both free and unfree. Population increases, climate change, dropping soil fertility and most of all, the greed of the ruling class was increasing poverty and causing growing anger. Following repeated manifestations of the Black Death from 1348 had ravaged the population, Dunn tells us that by 1381 the "English peasantry had endured almost a century of instability in its living standards, and an existence that was, at best ,precarious, and at worth, verging on starvation."

The loss of almost fifty percent of the population during the epidemics of 1348 and after led, almost immediately, to some peasants challenging the new economic reality. The ruling class responded to those attempting to increase their remittance, or break with their lords, by introducing laws to cap pay levels and maintain serfdom. Dunn suggests that thousands were hit by the Statute of Labourers (1349) breeding further discontent.

Dunn's narrative of the revolt follows the usual descriptions that I've mentioned elsewhere. But he is at pains to judge the original source material, sifting through the conflicting contemporary accounts and biased descriptions since from those repeating others' stories.

For Dunn the revolt was "predominantly, a revolt of the poorer elements of rural and urban society against lordship and privilege... but it is equally clear that the 1381 Rising was also used as a vehicle for the perpetuation of pre-existing conflicts, and commercial and jurisdictional rivalries, especially in urban communities." Hence Dunn says that the rising and capture of London had less to do with the arrival of the peasant armies from the surroundings and he emphasises the importance of the London population in, for instance, the destruction of John of Gaunts' Savoy palace. Dunn also points to studies that show that those involved in the uprising were often not the "unfree", but frequently "men who had served in the offices of village government". 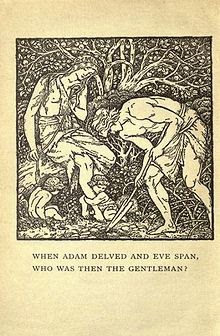 A study of 954 Essex rebels whose names have come down to us, finds that of the 283 whose occupations we know, only 5 were unfree. It may be, of course, that those who jobs were not listed were more likely to be unfree peasants, but this doesn't contradict the idea of the involvement of those who had "a degree of literacy and numeracy". The imposition of the Poll Tax and the Statute of Labourers, had, as Dunn points out, the effect of undermining those local "village elites", who then joined the rebellion about their own social superiors. We should also acknowledge, a point made by Rodney Hilton, that those who rebelled were predominately those who identified with the mass of the population, and worked the land in one form or the other.

Dunn's book gives an excellent sense of the Uprising as a national event, with outbreaks as far apart as Scarborough and Gloucester as well as the well known events of Kent, Essex and East Anglia. He also shows how the revolt led to the ruling class, riven as it was by antagonism and rivalries, coming together to fight the lower orders. But as with other accounts what shines through is the determination of the ordinary people to fight for a better world. In the midst of the uprising, in places like St Albans and Bury St Edmunds, the rebels reorganised the land that they felt had been taken unjustly from them, walking out the new boundaries, taking down fences and dykes. In the words of a later period, this really was a time when "The World Turned Upside Down".

Finally, Dunn puts the rebellion well in the context of the aftermath. Once the uprising was ended, the ruling class rivalries broke out again, leading eventually to the deposing of Richard II. But he also outlines the ways that the English ruling class maneuvered to try and maintain serfdom, and he explains why they failed. Serfdom in England wasn't ended by decree, but "disappeared through prolonged immersion in the solvent of economic change."

The Peasants Revolt continues to inspire. Alastair Dunn's book is an excellent introduction to why we should celebrate and study it further.

O'Brien - When Adam Delved and Eve Span
Hilton - Bond Men Made Free
Lindsay & Groves - The Peasants' Revolt 1381
Cohn - The Pursuit of the Millennium
Posted by Resolute Reader at 10:44 am