Namina Forna - The Gilded Ones 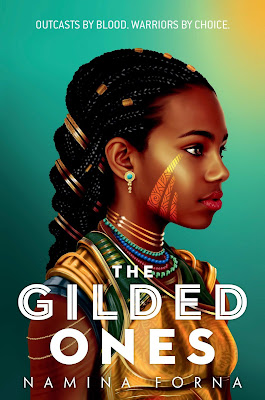 In her afterword, Namina Forna describes her first novel as an "examination of patriarchy". In contemporary fantasy writing this isn't as unusual as it might have been ten or twenty years ago, but this extraordinary young adult novel is much more than a book that places women centre of the story in a patriarchal male society. This is a novel intended, as Forna explains, to turn fantasy conventions upsidedown, but also to allow young black readers to see themselves in a novel. In a recent interview in the Guardian Forna explained that as a young woman and "Black Lord of the Rings fan" when she saw the films "no one on screen looked like me".

Deka, the young woman hero of the story, grows up in a village were she is the most dark-skinned of the inhabitants. Her mother, now dead, was not a local and living with her father she has always been an outsider. As she approaches puberty she has to partake in a blood ceremony that will allow her to become an adult member of the village. If she bleeds red she'll grow up, if gold, she'll be declared a demon.

Deka bleeds gold. To her shame and the repudiation of the village she is declared unwanted. Disowned and then tortured and killed by the villagers and her father, she resurrects again and again. Like other "demons" she cannot easily be killed permanently. Eventually she is rescued and alongside others like her finds herself being trained at a special school in the capital where the emperor wants her to fight the deathshrieks - monsters that threaten the country.

This first book of a trilogy sets the scene well. Deka learns about herself, and her skills and discovers friends and enemies among other "demons". She also learns that the deathshrieks aren't the mindless monsters that she's been led to believe. There is a little bit of Harry Potter here - Deka goes to a special military school where she feels completely outside, both in terms of background and knowledge. But this is no pampered idyll. She is quickly forced to rely on friends as well as her wits, to survive and learn who she really is.

The book explores important themes in ways that don't feel imposed from outside. Sexism, oppression, violence against girls and women, as well as questions of race and skin colour are handled subtly. Ultimately this is a cracking feminist adventure story, that doesn't treat the young reader as a fool. That said, the issues that are raised, from young women going through physical and sexual changes to issues of social ostracism and racism are essential to the story. Some readers might find some of the themes challenging - there is quite a bit of gore!

Reading this I felt enormously hopeful. I don't remember how old I was before I read a book that had a gay or lesbian character, let alone a young adult novel. While I wouldn't pretend that 21st century publishing is completely transformed, it is nice to know that young black and LGBT+ readers in 2021 will read at least some novels and find themselves inside.

Posted by Resolute Reader at 7:38 pm