Juliet Barker - England Arise! The People, the King & the Great Revolt of 1381 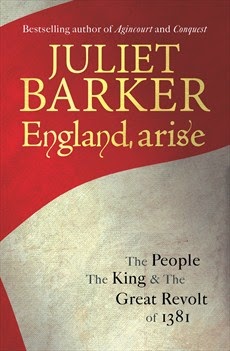 Juliet Barkers' book on the 1381 Great Revolt is a meticulously researched, well written and important new contribution to our understanding of the event. While I don't agree with all of her conclusions, and particularly have problems seeing Richard II as a naive ruler, sympathetic to the serfs who has to be persuaded to undo the concessions he made with Wat Tyler and the rebels at Mile End, this isn't a key criticism of the book. A bigger problem is that Barker fails to see the uprising as a more general class struggle which is why she rejects the term "Peasants' Revolt". That said, the wealth of material here, Barkers' excellently clear style, and the background material make this a book that will enormously contribute to discussions about peasant struggles in the medieval era.

I wrote a longer review of this excellent book for Socialist Review magazine in December 2014. This can be read here.