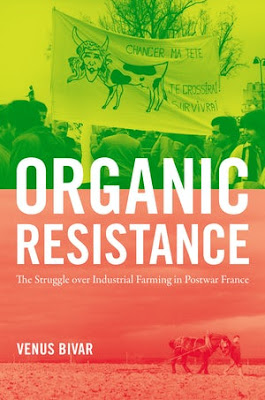 Until reading Organic Resistance I had a crude explanation for why it is that the food culture of European countries like France was so much better than we have in England. The reason was, I believed, because the processes of enclosure that took place in England with the development of capitalism lead to the complete defeat of the peasantry and with that, the systematic undermining of rural variations in food. In contrast, I thought, the process had been far less thoroughgoing on the continent, where the peasantry lasted longer and local food prospered, and indeed was protected, into more recent times.

It turns out that I was only half-right. As Venus Bivar's excellent account of the post-war transformation of rural France explains, the process is actually more complex. But also very illuminating for those grappling with the politics of France, the European Union and food itself. We also learn that what characterises French agriculture is not the localised artisanal food holiday makers and second home owners enjoy, it's actually mass produced export food.

Peasant agriculture survived much longer in France. At the end of the Second World War France society was still very rural, with 36 percent of the adult population working in farming (compared to 5.5 percent in the UK). The French government, in close alliance with US foreign policy, drove a programme of rapid industrialisation in the French countryside. Bivar explains that:

Between 1955 and 1975.. the active agricultural population was cut in half, and 40,000 to 50,000 farms disappeared every single year.... the average size of French farms almost tripled, from fifteen to forty-two hectares... By the end of the 1980s, just 6 percent of the active French population was still working in agriculture

The process was "ruthless". Bivar includes enough tragic accounts from farmers and their families who lost out in this process, to make the reader realise that what was taking place in a very concentrated time frame was very similar to the much more elongated process that took place in England in the 18th and 19th centuries. But the process in France was more than simply the engrossment of farms into larger units. There was a transformation in agriculture itself. Farms became larger, yes. But they also became mechanised, dependent on chemical pesticides and fertilisers, and producing crops for the export market. As Bivar summarises:

Farmers lost their land, took on crushing amounts of debt, compromised their health with the application of chemical inputs and left behind their communities - all in the name of modernisation. Technocrats, neo-corporatists farm unions, the EEC, and the Credit Agricole [bank] all worked to further the modernization agenda, and in doing so placed a series of demands and constraints on agricultural France, the most extreme being the near abrogation of property rights.

The enclosure of English agricultural lands had finished by the 20th century. Its industrialisation began in the 19th century, but World War Two was the moment when British farming embraced the internal combustion engine. But British farming spent WW2 providing for an war-economy, while France had no state support or foreign aid. When this came after WW2 ended it came very fast and was very thorough-going.

Early in Bivar's book there are a couple of remarkable maps, before and after "remembrement" of a small village. The before map, shows what look like medieval strip farming, and the post-map shows these strips joined together in huge fields. The "remembrement" process pictured could easily be mistaken for similar maps made during the English enclosure movement. Essentially this all but destroyed the French peasant food economy. It also destroyed the rural environment. As Bivar highlights:

much of the remembrement that was carried out disturbed the natural systems that had previously managed water and wind. Banks and hedgerows were destroyed while rural engineers implemented massive irrigation and drainage projects: 'Remembrement overturned the old inherited order of the fields, substituting it with the real-world checkerboard of the surveyor.'

So how come French farming today is know for organic, high-quality, low volume, locally produced cheese, wine and bread? The story of this, is another key part of Bivar's book. It is summed up in a fascinating advert that the author includes. It is one that at first glance looks like a modern advert against animal cruelty, highlighting the cramped conditions of animals. Titled "The life of a chicken in 1962" it contrasts battery chicken production with the lives of organic free-range animals. Sadly the whole text of the advert isn't translated, but Bivar gives us the highlights including references to "degeneration" and "civilisation". These words hint at the murky origins of the organic movement in France, lying as they do among far-right and sometimes fascist movements that sought to protect the French nation's purity and defend the interests of farming communities under threat from industrial production.

In the aftermath of the radical upheavals of 1968, a new generation of leftists entered the countryside and splits within the organic movement, together with growing acceptance of organic food as an alternative to mass produced food transformed the situation. Today organic food is associated with environmentalism, the left (in its widest sense), yet as Bivar artfully explains, this certainly was not the case and the real story is much murkier, going back to the Vichy regime and French antisemitism.

Post-war France saw enormous struggles over the country's identity. This led to a turn to the EEC and EU as a solution to rural problems that could not be fixed internally. As Bivar writes:

Throughout the decade, the threat of domestic unrest, precipitated by recurring waves of agricultural protest, loomed large in a nation whose history was famed for its periodic outbursts of rebellion. The Fourth Republic, preoccupied by the war in Algeria, struggled to maintain stability on the home front without diverting precious resources from its military operations. As the colonial situation worsened, the French state grew increasingly incapable of addressing the mounting concerns of its farmers. Accordingly, European integration, and specifically the integration of agricultural markets, grew more and more attractive as a means of assuaging rebellious farmers.

In the aftermath of WW2 the French state created an industrial agricultural system that made the country one of the biggest food exporters in the world. At the same time they destroyed rural communities and traditions. In the vacuum, the far-right was able to fill a political space and in doing so created an organic farming movement that today is celebrated globally. The contradictions of this process however, including the active participation of farmers in rebellious protests, have left a number of fascinating legacies that are brilliantly unpicked by Venus Bivar in this book.

Its a remarkable work that packs a lot in, but remains readable and accessible to the lay reader. It's wouldn't be a bad book to pack for those planning a camping trip to France post Covid. It might not be the first choice to read while sipping French wine and nibbling some local cheese, but it will illuminate the political and economic forces that have shaped the landscape and the food you are munching.

Posted by Resolute Reader at 7:12 pm