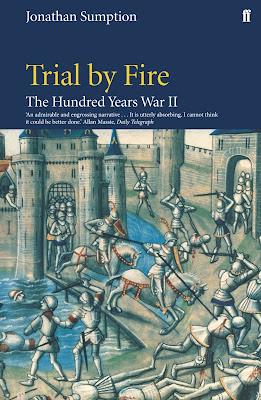 There is a famous quote from Hegel from 1806 when he saw the Napoleon Bonaparte after his capture of Jena. "I saw the Emperor – this world-soul – riding out of the city on reconnaissance. It is indeed a wonderful sensation to see such an individual, who, concentrated here at a single point, astride a horse, reaches out over the world and masters it."

I was put in mind of this while reading of the capture of the French King John II by the English after the Battle of Poitiers in 1356. At that point, the whole French administration fell apart. All the preceding tensions, caused by war, economic crisis and internal feudal rivalry, broke through. Before that, the king, through his very person was able to hold the French state together. With his capture and removal to England - despite his ability to communicate with his court and subjects, France was thrown into a unrivalled chaos.

Poitiers, or rather its aftermath, form a central part of volume II of Jonathan Sumption's epic history of the English-French Hundred Years War. It's in this moment that the French crisis is finally illuminated. But the roots go back many years to the initial English successes detailed in book one. The book begins with English forces, or rather bands and forces that identify with England, marauding the French countryside. The brutality was fighting and whole areas were stripped bare of food and people. When the small walled market town of Uzerche was captured, one account described the "murderers and robbers calling themselves English" who scaled the walls, killed the guards and opened the gates. Sumption continues:

One a Monday night they burnt down the buildings around the public square and plundered the richer houses. On the Tuesday they attacked the monastery, where many of the inhabitants had taken refuge, but failed to capture it. On the Wednesday they burned the whole quarter of the town by the river bridge and then withdrew leaving the streets strewn with corpses including thirty-two of their own number.

Sumption describes this as a "characteristic incident". Those that think the Hundred Years War was defined by military expeditions and battles like Poitiers, Crécy or Agincourt, ought to reflect that much of the war was conducted in the most brutal of fashions (Sumption repeatedly uses the word terrorist) by armed groups who fought under their own banners with "conveniently loose allegiance to Edward III". That said, terror tactics were not just down to the armed bands. The Black Prince's 1355-1356 campaign destroyed 500 villages, a dozen walled towns and made "serious" damage to the economy of south-west France. The Prince was "highly satisfied" by this.

While the detailed accounts of swirling allegiances and brutal fighting is hard to take in for the reader, I was struck by Sumption's sense of narrative in this, and the first volume. So Sumption details the different evolution of the English and French military, showing how the "privatisation" of the military in England gave them an organisational and disciplinary edge over the "innate conservatism" of the French forces.

In France, years of economic mismanagement, military failure and inept leadership had left the country on the verge of collapse. Sumption details the growing discontent - both in sections of the ruling class, but most importantly at the base of French society, which led to "revolution" in Paris and the mass peasant explosion that is known as the Jacquerie. Sadly these accounts are marred by Sumption's desire to paint them as "mass fanaticism" which was similar to the "atmosphere of 1792 and 1870". Given the utter failure of the French state to protect the mass of ordinary people - its no surprise that thousands of the lower orders decided that things needed to change.

The book ends seemingly with England in the ascendancy. The temporary peace deal had granted huge areas of France to England, yet it was built on sand. A proxy war in Spain had undermined the English military position and the economic situation was uneasy. Having returned to France from captivity, John II went back to England having failed to deliver all his ransom. His death there and the crowning of Charles V as France's new king marked a new period in the War and France's ascendancy. For the first time in years feudal rule is able to come back together under one person.

The length of these works might put many readers off. Those who persist will find them rewarding both in detail but also analysis. Jonathan Sumption is able to offer an overarching narrative that places better known events and battles into wider context. I look forward to volume III.

Posted by Resolute Reader at 6:00 pm