Naomi Mitchison - Among You Taking Notes 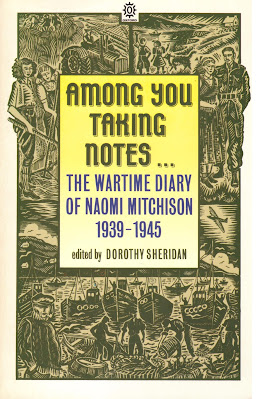 Naomi Mitchison, author, poet, feminist and socialist political activist and farmer led an extraordinary life. I knew of her first through her incredible feminist science-fiction novel Memoirs of a Spacewoman and so I was very pleased to discover, tucked away in a second hand bookshop, this edition of her wartime diaries. Mitchison was part of Mass Observation, a wartime project by the British government to keep the diaries of people from every walk of life. These are a mine of information about everyday life during the war, but Mitchison's are far more more than just recordings of her activity.

They contain musings on life and love, accounts of people she knows and records of wider events. I was initially disappointed that she did not include much about events during the war, but as I read on I discovered that what was more interesting was her accounts of the reactions by herself and others to events. One thing that may well surprise people today is how unpopular Churchill was. Mitchison was a Labour Party activist and had no love at all for the Tories, but she records a general feeling of dislike for Churchill - that he wasn't doing enough, that he'd been lucky and that he didn't care for ordinary people. His speeches are less warmly received than might be expected and there is a general sense of him failing to organise the war properly.

Being of the left Mitchison has great hopes that the war will bring a better society. She suspects that it will come because the Soviet Union will dominate the post-war world. She, and most of the others in her Labour circles dislike the United States, and have a grudging admiration for Russia. Mitchison had travelled there before the war, and was certainly no apologist for what she saw there. But she disliked it far less than the brash, open capitalism of the USA.

Living as she does on the West Coast of Scotland Mitchison is not as isolated from the war as might be expected. Visitors to her home include former POWs and Free French troops, local towns and harbours are bombed and she visits Glasgow and London in the aftermath of raids. Regular trips to London keep her in touch with events there, and several people she knows are killed. This isn't really a wartime diary about ration books and blackouts - though these subjects are there. What it is really about is the wartime experience - how the conflict drags on and people feel depressed, anxious and ill all the time. How people are worried about friends and food. How people try to make the best of things like Christmas, but it all seems a little bit like a charade. As I read it I found more than a few parallels with my life under Covid lockdown!

Mitchison's politics are also fascinating in the context of the time. She regularly argues with friends and people she meets about issues, including the question of women, house-work and employment. These arguments take on a wider importance during the war, as women's roles are transformed. But Mitchison's own personal ideas are fascinating too. I understand that later in life she and her beloved husband Dick Mitchison had an open relationship, but it is clear from the book (explicitly and implicitly) that she has several sexual relationships during the war.

Reading about these, her thoughts on politics and the war, her commentary on the government, Russia and the USA and much else I was struck by how honest a diarist she was. That she confided such innermost feelings to a public diary that was posted regularly to London is fascinating in itself.

The full diary runs to over a million words and I would have happily read every entry. I also wonder what has been excluded. For instance while Mitchison makes the occasional references to workers' strikes, I'd have liked more on class struggle in wartime. Was she aware of protests in London against the rich or in favour of better bomb shelters? She had many CP friends and protested the suppression of their press, so she would likely have known about such events.

I always feel that a sign of a great biography, memoir or journal is that when you finish reading it you feel like you've taken part in a life. While Among You Taking Notes is not a complete biography, it has an epic feel to it - partly because of the period covered by the account. I am now inspired to read Mitchison's novel The Bull Calves, which she wrote through the war.

This is a book for people wanting to understand life under wartime, but it's also a great introduction to the life of one of Scotland's most important literary figures.

Mitchison - Memoirs of a Spacewoman

Posted by Resolute Reader at 4:07 pm