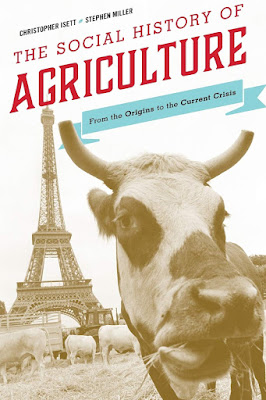 This is an excellent materialist history of agriculture through human history. The authors have taken representative examples from numerous different historical eras and given a excellent general picture of the varied ways that humans have farmed - but their emphasis is on how the social and economic framework of different societies shape agriculture. As such they also look at the way that farming shapes society and vice-versa.

The opening chapters look at pre-capitalist societies. There are excellent overviews of Ancient Roman slave agriculture, Sumerian society and Han China, this is followed by a study of Early Modern farming, with material on Feudal Europe as well as the Inca and Pre-colonial West Africa. These few examples demonstrate that the authors have produced a truly global history. The arrival of capitalism transformed production and also transformed agriculture. The authors note:

Until the arrival of capitalist industry in the eighteenth century, the extraction of rural surplus via the control of land and labour remained at the centre of all economies and their political systems.

Given the approach it is no surprise that the authors focus on class and social relations. Though they do not neglect the nature of agriculture - from technology and equipment, to types of crops and different methods of farming. In fact the transformation of these practices through the interaction between societies, technological development and the rise of capitalism are key to the book. As this passage demonstrates, they shown a keen awareness of the dynamic nature of agrarian communities:

While African peasants met their basic food and fibre needs without recourse to markets, this is not to say they were 'primitive' or 'irrational.' Quite the opposite; our point is that African peasants found ingenious and practical ways to meet their needs without resorting to sales and purchases. With most or even all of their production unaffected by the requirements of market exchange, and thus not subject to cost-cutting pressures, they developed crop rotations that fulfilled their needs directly. They mixed animal husbandry with crops when possible and always engaged in polyculture. They adopted New World crops especially maize and manioc, when these appeared and where they proved suitable. Furthermore, communities endeavoured to provide the basic social conditions necessary to maintain and regenerate families. They compensated for comparatively simple tools and methods by sharing labour and decisions, while providing all members with farmland and access to surrounding resources.

The authors demonstrate how the arrival of capitalism changed these societies. Colonialism and the slave trade forced a complete transformation of society. But where capitalism developed agriculture was a key part of the transformation, shaping how society fed itself but also creating the capital that made capitalism possible.

These changes were marked by resistance and rebellion. The authors note several episodes of rural rebellion, including the French peasant revolts of the 1770s and the 1381 Peasant rebellion in England. The brutal processes that enclosed farmland as capitalism developed are certainly not ignored.

However I wasn't entirely convinced by the authors' framing of capitalist development and agriculture. The repeatedly argue that, in various parts of the world, agricultural societies tended to be inoculated against urban areas. So they argue in the Early Modern Period,

The peasants of France, then, raised output by devoting extra labour to the fields but had to contend with the demands of urban landowners and seigneurs. The peasantry provided the towns with textiles and foods but did not purchase items in return.

But while the relationship between town and country might not have been equal in terms of material exchange. It certainly was not one way. Here I think that the authors overlook the dialectical relationship between the two. Historical accounts make it clear that there equipment and basic necessities were bought from urban merchants - salt or iron for instance. Chris Harman also points out, that:

At a minimum, the towns – and not just the large cities, but the many smaller towns – provided a market for the output of the improving farmers and some of the inputs that made improvement possible. These inputs were not necessarily just physical: also of importance was the spread of knowledge about how improvement was possible. One contributing factor to the economic advance of Bohemia in the century before the Thirty Years War was the circulation of books detailing the most productive agricultural methods.

As in their early chapters the authors explore the varied agriculture that arose globally with capitalism. There is a brilliant section on plantation slavery and it's relationship with emerging Atlantic capitalism, as well as studies of countries as varied as China and Japan, Russia, France and many areas of South America (including Cuba). These are all fascinating and I will return repeatedly to them when I need a quick summary.

The authors argue that the arrival of capitalism is the outcome of the class conflict between lords and peasants in feudal Europe. This application of the Brenner thesis, is, in my view incomplete and lacking in nuance (see this review for instance). However this theoretical limitation does not distract from the wider achievement of this book which is a significant contribution to our understanding of human history and agriculture. I highly recommend those interested read it together with Mazoyer and Roudart's book.

Posted by Resolute Reader at 3:24 pm