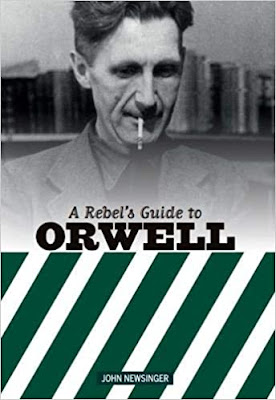 The Rebel's Guide series continues to be an essential introductory guide to radical thinkers and ideas. This latest edition, a short guide to the life and ideas of George Orwell, packs a surprising amount into a 60 pages. Orwell's life is fascinating, but his legacy is contested and often misunderstood, so this short informative and generally supportive introduction is very useful.

George Orwell is celebrated as one of Britain's greatest novelists. Yet, despite his works Nineteen Eighty-Four and Animal Farm being used to attack socialism, Orwell was a radical socialist and anti-capitalist.

John Newsinger takes apart the smears of the right and the misconceptions of the left and argues that socialists need to understand Orwell as a consistent opponent of capitalism, while understanding the compromises he made in a life that saw him expose working class poverty, support radical movements and fight for the Spanish Revolution.

Newsinger is very good at showing how Orwell's ideas change. After an education at Eton, Orwell becomes a colonial policeman in Burma and begins to understand the colonial project, breaking from his past. Orwell doesn't hide who he was - he agonises over hitting his Burmese servants, for instance. On his return to Britain in 1927, Orwell decides not to return and begins looking elsewhere for ideas and explanations. One of the themes of Newsinger's book is that Orwell is shaped by what is happening, or not happening, around him. He notes, for instance, that Orwell returns to the UK in the aftermath of the failure of the 1926 General Strike. Travelling around England on his "tramps" Orwell sees the poverty and unemployment, but it is in the context of a "working class on the defensive". How different Orwell's writings - powerful and insightful - from these times might have been had the working class being fighting back.

This is why the contrast with the Spanish Revolution is so important. In Barcelona Orwell famously comments on seeing a city where the working class "is in the saddle" for the first time. He takes to the Revolution like a duck to water, and sides with those who want to extend the revolution - not those Stalinists who want to roll it backward. It is in Spain that any illusions in the Soviet Union and the Communist Party disappear, and this shapes his ideas and activity through World War Two.

Despite latter day attempts by the Labour Party to claim Orwell as one of their own, Newsinger makes the point that Orwell never once tried to join Labour. His membership of the Independent Labour Party was on a more radical base. Orwell had no use for reformism, though he lacked a clear understanding of the need for revolutionary organisation. Labour's behaviour in coalition in World War Two and immediately afterwards did little to shatter Orwell's illusions. That said, Orwell supported the Labour government as a bulwark against a revived Soviet Union, and it's in this context that Orwell makes some of his biggest mistakes - including giving names of pro-USSR figures to the authorities.

Newsinger writes, that in the post-war period, "even while he was writing Nineteen Eight-Four, even while he was assisting the IRD [The UK government's black propaganda outfit], Orwell was still critically engaging with ideas of the far left. What we can see here is that Orwell was grappling with difficult times, often making mistakes, bad mistakes, but still remaining wholeheartedly committed to democratic socialism"

In this sense it is important to see 1984 as a critique of the Soviet Union from the left, though Orwell lacked clarity one what sort of society the USSR had become. Newsinger argues that Orwell remained a committed socialist "fighting for the overthrow of capitalism" right until his death. But cautions that we cannot be sure where Orwell would have gone. He is confident that Orwell would have opposed British intervention in Suez, for instance, but "would he have supported the Korean War?" Might Orwell have become a figure in CND? Would he have gone over to the right? Wisely Newsinger avoids to much speculation.

As an introduction to George Orwell John Newsinger's book is recommended and left me keen to read other, longer, works by Newsinger on this important figure for the British Left.

Posted by Resolute Reader at 5:31 pm