Iain M. Banks - Use of Weapons 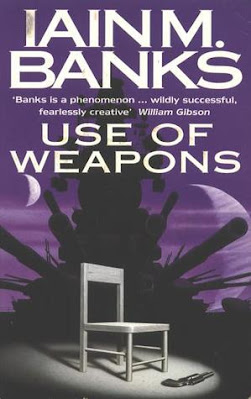 Iain M. Banks' Use of Weapons is a complex novel. Set in his post-capitalist future, Banks' contrasts the well-being, contended lives and equality of the Culture with several societies visited by his central character Cheradenine Zakalwe. Zakalwe grew up outside the Culture in a militarised, feudal society. Trained in the arts of war and brutality, Zakalwe becomes an agent for the Culture's Special Circumstances division, a black-ops outfit that does dirty work in societies that the Culture wants to direct and shape.

The story of some of Zakalwe's missions is interwoven with chapters about his own life, particularly his difficult childhood. As these stories converge, readers will begin to suspect that not everything about Zakalwe is what it seems.

Despite it being well over a decade since I last read Use of Weapons I had very clear memories of the ending, what I didn't remember at all was the details of the novel itself, and this made the re-read very enjoyable. In fact I found Banks' contrast between Culture and non-Culture worlds' quite telling. This was the book that made me really unsure about whether I actually liked the Culture or not!

Telling the stories of different missions gives Banks' the chance to play around with different locations. Drawing these new worlds was a great strength of his science-fiction writing and this is one of his best. The future, shiny, bright and dark and gritty.

Posted by Resolute Reader at 5:57 pm