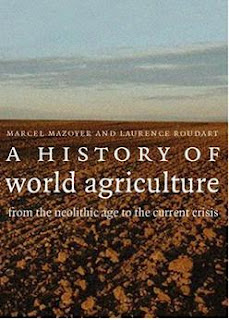 Depsite how we in the modern world might view agriculture, it is
more than simply another branch of industry. For those of us living in the developed world, the vast majority of us have little or nothing to do with the production of food, or indeed other crops. Today, those doing the farming work that feeds us all, comprise, in the developed world at least, somewhere around 5% of the populations.
However, for the vast majority of human history and indeed for most of the undeveloped world, this is not the case. Most people were involved in the production of food, and in most historical societies, almost all of the work that took place within a community was related to food production.

Mazoyer and Roudart's work is an examination of the history of agriculture - from the earliest hunter-gatherers who would have nurtured and protected plants, to the slash and burn cultivation that replaced them, through the various permanent "post-forest agrarian" cultures that saw the growth and strengthen of class society, to feudal and eventually capitalist agriculture. It is a monumental book, both readable and interesting as well as in depth and well researched.


There is a temptation to see agricultural history as a linear path. Indeed my summary of the book in the previous paragraph makes that very mistake. But development of agriculture wasn't linear, though it did develop along definite paths and through particular stages. The reasons for moving from one form to a more developed form are complex and varied. Sometimes people didn't move on - which is why today there are still hunter-gatherer communities or people practising slash and burn cultivation. More developed agriculture is not necessarily easier work - though it will invariably provide a greater surplus. Nor is there necessarily a straight dividing line. Hunter-gatherers will have planted and harvested grains. Slash and Burn cultivators would have gathered nuts and hunted game.
Often though, population pressures and growth were a key factor - in particular with the switch from slash and burn to more permanent agriculture. The authors document these processes, along with all the other factors to show just why the world of farming changed when it did. There is a wealth of technical detail - some of it obscure to those of us who've never seen a field of corn harvested. But what is fascinating is the way there is often repetition of tools and practises across many different continents. What is also amazing is the way some primitive methods still dominate - the simple scratch plough (the ard) still being used by hundreds of thousands today, even though it was replaced hundreds of years ago elsewhere.
But this book is also part polemic. The authors are trying to explain why it is, despite technical innovation and cheaper materials, the "difference in productivity between the least efficient agriculture in the world, practiced exclusively with manual implements ... and the best-equipped and most efficient agriculture has increased dramatically. The gap has widened from 1 to 10 in the interwar period to 1 to 2000 at the end of the twentieth century".


They continue by pointing out that "One third of the world's peasants, or more than 400 million of the working population, work not only with strictly manual tools but without fertilizer, feed for livestock, pesticides, and specially selected varieties of plants and breeds of animals". One billion people get their food from peasants farming like this.
The root of this is of course wealth. The poorest farmers simply cannot afford to lift themselves out of the situation they are in, to obtain the most advanced equipment, fertilizers and seeds. They cannot compete against the cheaper priced crops from the developed world, and face sinking back into poverty and starvation.
So the last chapters of the book look at alternate economic strategies to solve this problem. This is, I would argue the weakest section. The authors aren't naive enough to believe that simple controls on the import of cheap foodstuffs are enough to raise prices in the home market. But they have no other option. The problem is, that they aren't discussing agriculture in the context of capitalism - and the inherent power that the richest nations have over the poorest. Whatever rules may be created by a United Nations body, the rules of colonialism and imperialism will make the poorest pay.
But these are minor criticisms of a tremendously important book. This solid investigation into the basis for human societies throughout the last 20,000 years is ammunition for those of us who believe a genuine materialist history of humans is possible. By examining in such detail different cultures and societies, we can put together an understanding of human development, and failure which will help us understand the enormous challenges for the future.
Posted by Resolute Reader at 9:32 pm