Timothy A. Wise - Eating Tomorrow: Agribusiness, Family Farmers, and the Battle for the Future of Food 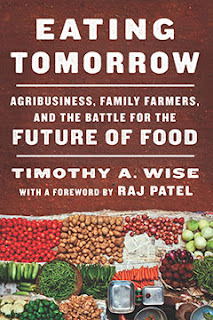 Industrial capitalist agriculture is not sustainable. It produces lots of food, or plants that could be food if they weren't burnt as biofuels, but it does so in a way that generates huge amounts of greenhouse gases, destroys biodiversity and leads to unhealthy diets. It is also enormously profitable for a few multinationals which produce fertilisers, seeds and then package and distribute the food. Those who grow the food, and those who eat it, benefit little from this process. So what sort of agriculture can be both environmentally sustainable and benefit those who work the land?

Timothy Wise's fantastic book goes a long way toward answering that question. Based on his trips to food producing areas of the world, he talks to academics, scientists and politicians, but above all farmers, labourers and those organising among the agricultural communities to discover what practices are actually working for soil and people. The answers will surprise those who have been brought up on a diet of corporate propaganda that tells us the only way to feed the world is through giant, monocropped fields full of crops covered in pesticides.

Wise begins in Malawi, an area that is historically heavily dependent on maize, and which has recently seen a battle by multinational seed corporations such as Monsanto to introduce specific hybrid white maize. This maize is excellent for the corporations because it makes lots of money and farmers have to return year on year to get seeds, and also it has the potential for higher yields if watered and fertilised properly. But the reality is very different. Wise describes the situation as a "high-input treadmill" where:


The farmers are subsidized by the government to use imported inorganic fertilisers and hybrid seeds from outside companies like Monsanto. Sometimes they get higher yields - but not always, not if they can't afford extra fertiliser, which the seeds require. If the subsidies run out, the farmers can't afford the seeds or the fertiliser.... Farmers run hard mostly to stay in place.

Wise goes on to show how traditional seeds, combined with "intercropping" - the mixing of different crops, can produce higher, healthier yields, at lower costs and more sustainably:


Native orange maize, intercropped with out healthy food crops is a Malawian natural resource. It appears to be drought-tolerant in a changing climate, high-yielding even without imported fertiliser, well suited to intercropped systems design to restore soil fertility and offers nutritional qualities desperately needed by the population.

So why isn't it used? The answer lies in the privatisation of the seed system which has empowered multinationals to profit from and shape the country's agricultural system. Interestingly Wise shows how organisation based on giving farmers and producers access to proper seeds and local knowledge has been successful in spreading the word about more sustainable and better practices. Here, like his other descriptions, from the field really gives a sense of how a better agriculture is possible. In Malawi Wise describes a local co-operative that produces a variety of crops, healthy food and feeds families through the difficult dry season as well as producing plenty of food to sell at the market. With government subsidies that helped build the irrigation systems, "small can still be beautiful, with public support" Wise argues. Its a compelling vision. The problem was that most governments are doing the opposite. As Wise explains:


The peril, as I saw in Mozambique and other parts of Southern Africa, was that when foreign capital landed with both feet it was usually on land already occupied and cultivated by farming communities. And the wave of modernization didn't usually carry peasant farmers forward with a rush, it buried them along with their crops and communities.

Time and again, in the developing world and the developed world we see the same process repeated. Big corporations buying up land, imposing agricultural practices and damaging the environment in the name of profit and the farmers and their families being displaced. Government policy, and the "international community" promote these practices that undermine rural communities and our food supply. The advance of capitalism into farming has, since the enclosure of land in Britain from the 17th century onward, driven people off the land and usually into poverty. The process continues today as peasant agriculture is destroyed in the interest of making money.

One other aspect of modern agriculture that Wise explores is the limitations of the Green Revolution. This, he points out, was supposed to feed the world, but is based on the idea that more food feeds more people. The problem is, as Wise shows, that hunger is caused by poverty not lack of food. Despite this the Revolution is being exported to Africa where it tends to be even less successful. In places like Malawi, the high-intensive farming strategy used in Asia fails and leaves in its wake decimation of people and agriculture.

One final part of the techno-fix agriculture proposed is genetically modified crops. Here Wise uses the case study of Mexico to great affect to show how GM is driven by a desire to maximise profits, even at the expense of destroying the historic centres of maize - with a myriad of different versions. One of the most eye-opening parts of the book is when Wise is invited to a meeting to discuss GM crops with unusually candid Monsanto representatives - they happily spill the beans, confident that their methods and ambitions are correct. In contrast, again Wise argues that a "pro-poor investment in small-scale farming" is a viable alternative:


We estimated that within 10-15 years Mexico could increase annual production on current lands from 23-33 million tons. That would eliminate the need for imports from the United States which currently cover the country's annual shortfall of about 10 million tons, the imports costing more than $4 billion in 2008. Additional public investment in irrigation and infrastructure projects in the southern part of ten country, where water is plentiful and rural poverty is the most prevalent, could allow producers to grow another 24 million tons per year... more than enough to meet Mexico's growing demand for maize.

Throughout the book Wise emphasises the self-organisation of those who work the land and their families. As he points out "the pro-corporate agenda" blinds policy makers and it is social movements that can, and have, transformed the situation. Creating a food system that can feed the world will require more than simply having a few successful farming co-operatives. It will ultimately require challenging and then breaking up the multinational corporations that are only interested in profit. Already countless women and men are part of that process and it is a great strength of this book that Wise gives voice to them. This excellent book shows that the alternative agriculture that we need, in the developed and developing world, is both possible and practical. The real challenge is the struggle to get it.