Henry Heller - The Birth of Capitalism: A Twenty-First-Century Perspective 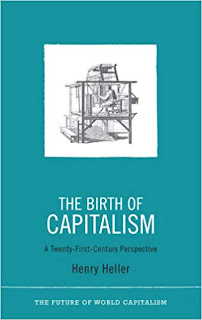 How did capitalism arise? It is a question that has been often discussed, and the debate between Marxists has been fierce. The post-war period saw a intensity of this discussion with figures like Rodney Hilton and others contributing their positions, and in the aftermath of 1968 the development of a new, revolutionary, left that broke with Stalinism, allowed the debate to flourish without the hindrance of a line that stemmed from the political outlook of the official Communist movement. A new generation of scholars, and some longer-standing figures, argued through what became known as the transition debate.

Henry Heller's remarkable book is, perhaps, the best summary of the debate I have read. It is not neutral - Heller is critical of many of those who have written from a Marxist and non-Marxist point of view on the transition from feudalism to capitalism - particularly Robert Brenner and his followers. Heller argues that to understand the transition the historian has to look at a variety of different aspects of society and place them in a unified context. Thus, writing about EP Thompson, he says:


[Thompson] like other British Marxist historians, gave license to an approach privileging the study of workers, plebeians and peasants. This was understandable given the previous neglect of the role of the people in history. But this opened the way to an approach which ignored the study of the political and economic opposition between workers and peasants on the on hand, and landlords and capitalists on the other, in favour of a one-sided preoccupation with the lower orders. The relationship between opposed classes must be the focus of any serious study of the origins and dynamics of capitalism. Moreover, class conflict is always resolved a the level of political struggle and the control of the state... It is the dynamic of class struggle which must be the focal point of a Marxist approach to history.

Heller looks at a much wider context to the development of capitalism than many others - his sections on Japan for instance, are fascinating, though I'd have liked a lot more about China, Asia and elsewhere. More importantly in the context of his engagement with Brenner and others, he firmly argues that it is not enough to discuss the development of capitalism through a study of English history. He uses studies of Italy, Germany and France to illustrate how capitalism began to develop, but failed to break through unlike in Holland and England. This, he writes, is because


The key difference between these countries, where the development of capitalism was arrested or limited, and England and Holland lay in the balance of power between capital, the state and feudal power. Italy failed to consolidate a territorial state because of the too great strength of merchant capital, while in Germany and France feudalism proved too strong.

The failure of capitalism to break through had a number factors, but when it did break through in England and Holland, precisely because those economies were not separated out globally, it had an impact elsewhere, hampering its development still further. In this context Heller quotes Perry Anderson's criticism of Brenner as a "'capitalism in one country' approach". Heller repeatedly returns to this theme, noting for instance, that:


At the beginning of modern times [the non-unified] Germany and Italy were as much nations as France and England and both witnessed the development of capitalist classes. But the failure to construct national territorial states in the former countries aborted for the time being their capitalist futures. The lack of such a state deprived merchants and entrepreneurs of the protection necessary to gain control of foreign markets and territories, blocked the further development of national markets and arrested the maturation of their bourgeoisie.

Heller notes the special case of France, where the weak bourgeoisie was unable to overthrow the nobility, and the state, despite some "fostering" the development of the bourgeois "to a certain extent", but eventually continued to protect the interests of the old nobility, badly hampered the development of capitalism. He concludes that in France, "capitalism was forced onto the defensive until the eighteenth century". This can be contrasted with those countries where the state began to play the role of a "political bridge between feudalism and capitalism". There the state was able to "provide an arena for the generalisation and integration of capitalist relations of production". Thus the breakdown of the old feudal order was accompanied by the state facilitating commodity production through the creation and protection of markets internally and overseas.

Heller's focus on the world beyond England does not mean he neglects debates about the development of capitalism in England. One particularly important aspect about his argument is his discussion of "agrarian capitalism", much favoured by Brenner and his followers (such as Ellen Meiksins' Wood). Heller favourably quotes Brain Manning's approach which emphasised the interaction between town and country, farming and manufacture, agriculture and industry. In my view this is critical to understand the influence of this interaction if one is to see how capitalism could rapidly take off in England after the Civil War. Brenner, according to Heller, is unwilling to accept this because he rejects the idea of bourgeois revolution. In contrast, Heller highlights historians like Manning who show the way that the Civil War was a victory based on the "mobilisation of the middle sort of people", which "marginalised" the old order of landowners and aristocrats. This in turn creates a new state favourable to the development of capitalism. As Heller summarises:


As a result of revolution, the state was restructured in each case to enhance the further accumulation of capital at home and abroad, and to advance the social and political ambitions of the bourgeoisie. By transforming the state from a feudal to a capitalist institution, the revolutions in Holland, England and France, helped to consolidate capitalism as a system. In taking this view we have challenged the view of Brenner and the Political Marxists, who would deny the significance and even the existence of these bourgeois and capitalist revolutions.

In his conclusion Heller re-emphasises the importance of his twin track approach - the coming together of social forces that could win revolutionary change, and a state that could encourage and develop capitalism:


Capitalist farmers, a group whose economic ambitions were evident in the late medieval period, together with well-to-do craftspeople followed a revolutionary path by reorganising production in both agriculture and industry from the sixteenth century onward. Led by these same proto-capitalist elements, petty producers and wage workers provided the shock troops of the early modern social and political revolutions.

Henry Heller's book is a must read for those Marxists trying to understand how capitalism came to dominate the world and what this means in the 21st century. It is worth mentioning that in his engagement with other Marxists on this question he does highlight the work of Chris Harman who is often neglected as he wasn't an academic. Heller pays Harman the highest of tributes in his book, and it is worth noting that sometimes the best work on this subject comes from authors who were actively engaged in the building of political organisations to try and change the world.

Heller shows how the development of capitalist forces were initially progressive, but have now come to be fetters on the further development of society - and as we face global environmental chaos and economic crisis, his conclusion that we need to transform society again cannot be ignored. His book is important ammunition in understanding both the history of capitalism and the ideas that can be part of the fight for socialism.