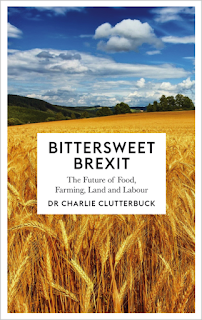 Charlie Clutterbuck's new book is an important intervention into discussions about the future of the British food system. I urge everyone, whichever side of the "Brexit" debate you may find yourself, to read and digest it. Clutterbuck is a scientist and researcher with long experience of UK farming and soil science and has close links to the trade union movement. Deliberately, on the part of the author, Bittersweet Brexit is not a debate about the rights and wrongs of leaving the EU, and nor will this review be. For the record, I voted to leave the European Union (EU) in the Referendum - not because I'm opposed to immigration, or right-wing - but because I see the EU as a capitalist institution that needs to be broken up - Clutterbuck voted the other way, though I can perfectly understand his reasoning.

The argument of his book, is that Brexit offers a unique opportunity to transform British agriculture in order produce healthy, sustainable food that rewards those who work the land, and produce the food. As Clutterbuck explains while dealing with the question of the limitations of our current food system:


The contradiction... that the problem is not overpopulation, but overproduction - has still not been addressed. We need to produce 'better, healthier and greener food'. And we can. Leaving Europe may be our opportunity to do so.


But it will be a battle. Consumers will still want cheap food. That won't stop any time soon. Yet cheap food costs the earth... We cannot rely on individual consumers to do this. If ever there was a case for state intervention, this is it... It means we have to have political answers, not individual ones, however well-meaning.

Much of the book is a clear explanation of why the food system is like it is. Clutterbuck highlights the role of the EU in this, but it is not a problem simply of the EU. British agriculture is part of a capitalist food system that is geared, not towards feeding people, but towards making profits for the food corporations, farmers and capitalist companies. Unfortunately this system only benefits the most wealthy - large landowners, big farmers and food multinationals. It does not help the workers, agricultural labourers, small-holding farmers and those who consume the food. Clutterbuck argues:


The biggest opportunity in the Brexit process is to redirect the £3bn EU CAP [Common Agricultural Policy] funding... We need to subsidise labour in the food sector to keep food prices down, which customers demand. This will fund local produce and rural communities.

He argues that the £3bn annually could give 300000 UK national farm-workers and farmers an extra £10,000 each per year. This would stimulate local economies, strengthen the position of small farmers and "attract younger workers into the sector". Clutterbuck also argues that it would "help replace migrant workers with permanent workers".

This last point needs developing. Firstly British agriculture (and other sectors of the economy) are highly dependent on immigrant, or temporary workers from other parts of the world. This is why the CBI has recently raised concerns about immigration targets after Brexit which could damage the economy further. In particular, one of the most problematic areas of British agriculture at the moment is what Clutterbuck calls "plantation farming", this is the monoculture cropping prevalent in the south-east which produces crops like fruit and is highly dependent on immigrant labour. This method of farming is highly unsustainable and relies on low-wages etc. Clutterbuck offers some suggests for the future - obviously he wants higher pay, and suggests (presumably in the case of hard Brexit that stops most immigration) that the country employs"students to pick the harvests as many people used to do."

I'm not sure I agree entirely here. Firstly I think that if we are going to fight to shape agriculture after Brexit, then the union movement and the left must fight to shape the type of immigration policy that we need, and this could and should be one of open-borders that allows employers to use seasonal workers from wherever they come, and workers to work where they need to. This might even include students. But whoever they are they should be paid a proper wage with proper rights (such as holiday and sick pay). Second, I don't think we should give an inch to the right wing who want to simply argue for "British Jobs for British people". Agriculture (as with much of the British economy) has historically been highly dependent on workers from over-seas. The problem with British agriculture (and for clarity, Clutterbuck does not say this) does not come from immigration. It comes from the way that land and capital ownership is distributed. As Clutterbuck rightly highlights:

Some sections of British (agricultural) capitalism are, as the CBI link above shows, highly concerned about a hard-Brexit. Clutterbuck points out that in 2016 many food companies and representatives of the National Farmers Union wrote to the UK government saying:

Clutterbuck highlights the hypocrisy of this: "I heard not a tweet from any of these characters about the abolition of the Agricultural Wages Board (AWB)... The same NFU and the Fresh Produce Consortium wanted to pay migrant workers only the minimum wage... Apparently it was essential to their business to pay as little as possible."

Throughout this book Clutterbuck highlights exactly how difficult leaving the EU will be in terms of the way rules and laws apply to our food system. Literally thousands of pieces of legislation will need to be re-written, re-considered, or scrapped and redrawn. This includes trade deals, health and safety legislation, rules about pesticides and additives and so on. A crucial theme of his book is which aspects should be protected, which improved and which scrapped. Readers will no doubt disagree on some, but they are all worth serious consideration. The alternative, as the author explains, will be trade deals with other countries that may well have even worse consequences for producers and consumers. One aspect that Clutterbuck does argue for is a more sustainable British food system that does not rely so heavily on imports.

As he points out, free trade does not provide food security, it only helps the profiteering multinationals and it is certainly right to think about how Britain could produce better, healthier and more varied food (Clutterbuck highlights how the present system reduces some products such as fruit and vegetables to a tiny number of varieties). But I'm wary of a strategy that calls for "a new branding of Britishness", as this approach can feed a nationalistic direction with all the dangerous potential that means in the era of Trump and the alt-right. "Buying British" won't on its own give us a sustainable food system - that will come through challenging the multinationals, the landowners, supermarket domination and the capitalist system itself.

Clutterbuck finishes the book with a series of demands that we should be fighting for, and the need for a "coalition of red and green, of unions, NGOs, to local initiatives, businesses and interested political parties, to build a new red-green food economy to challenge power bases."

For all I may have criticised some small aspects of Charlie Clutterbuck's book here, I do embrace the sense of democracy and regaining of control of agriculture that is in his conclusion. He writes that:


As both a socialist and a soil zoologist, I believe that we should get rid of the magic money trees that benefit the already well off, and plant many more real trees so that everybody can benefit from their fruits., We should be growing all sorts of plants throughout the land, in ways that are not demeaning to workers but promote the pleasures of working the land and save our inheritance. This may sound idealistic, but it is also very practical. We can show what and who we want to be through food. We can do that by cutting out food speculators and investing in our land - once we have 'control over our land'.

Taking control of the land should be a key vision for the labour and trade union movement post-Brexit. But doing that in a way that fosters internationalism, not puts up borders and keeps out migrants like the EU does is crucial. "Control over our land" should be about mass democracy - there are too many fences and barriers already to ordinary enjoying the land and working it, and longer term we need to take the land off the massive landowners so it can be used for everyone's benefit. Charlie Clutterbuck's book is an important look at the challenges we face, but one that can inspire real change as long as workers and their organisations are prepared to fight for it. I encourage people to read it.