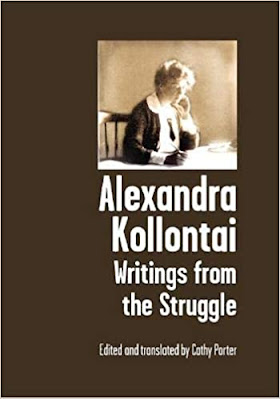 Alexandra Kollontai was a fascinating revolutionary. Born into a wealthy Russian liberal family, she came to embrace revolutionary Marxism and was active in both the Mensheviks and Bolsheviks. During the Russian Revolution she was a leading Bolshevik agitator, active on their Central Committee, and became a trusted figure in the immediate post 1917 Soviet government. Never afraid to raise her differences of opinion and go her own way she did, on occasion, disagree fundamentally with Lenin and this led to a rift between them. A distinguished old Bolshevik, she survived Stalin's purges and murders of former comrades and served the Soviet Union as a diplomat - which perhaps explains her survival.

Cathy Porter's biography of Kollontai, recently updated and reissued - remains the single best account of her life. Now Porter has released this collection of articles and extracts by Kollontai, and they are a breathtaking insight into her ideas and the early socialist movement. Kollontai wrote leaflets, pamphlets and articles that agitated for socialist ideas - in Russia and in German exile. There are many different examples here, which showcase Kollontai's talents. But she also wrote on subjects that were rarely discussed within the socialist movement - sexuality, love and interpersonal relations.

I enjoyed Porter's editing here, because she weaves Kollontai's work into the story of her life. Each piece is part of the wider narrative and I found it made them more accessible. All of the chosen pieces by Kollontai are fascinating, though several stand out. As someone with an interest in the German left, I was fascinated to read Kollontai's diary-like account of the outbreak of World War One and the capitulation of the German revolutionary left to its nationalist government.

I rush to the party headquarters to ask how soon the International can be convened. Haase, the leader of the socialist group in the Reichstag, is there on his own. "Are you joking?" he says. "War is inevitable. People have gone mad, there's nothing we can do!" At the Women's Bureau, I ask Luise Zietz of the party Executive what instructions they have received... She looks at me coldly. "We've protested and demonstrated, but we must do our duty when our country is in danger," she says, and I look her in the eye and realise I am not longer a comrade but a Russian...

With the help of Karl Leibneckt, she and her son and other Russian socialists are able to leave Germany. In Leibneckt and Rosa Luxembourg, and soon Lenin, her despair quickly turns to anger and agitation. Meeting Luxemburg a month after war broke out Kollontai describes Luxemburg's outlook: "She hasn't lost touch with the workers, and says most are against the war. Her clearsightedness is heartening, and her merciless sarcasm puts much in its proper place."

During the war Kollontai writes some of her most powerful and influential articles. A 1916 pamphlet "Who Needs the War" is read by an estimated 7 million German and Russian soldiers. Reading it in this collection its lost none of its anger and power. In fact its the enduring nature of her writing that makes much of it so exciting to read today. Kollontai's 1906 pamphlet "Who are the Social Democrats and What do they Stand For" is a brilliant introduction to revolutionary politics. It was reprinted in the midst of the Russian Revolution and used internationally to explain the politics of the Bolsheviks. Some of it could be reused today in many parts of the world to put the case for socialism, with little or no changes:

Under the capitalist system, factories produce ever greater quantities of goods in the fight for profits. Then as industries gain new world markets, nations are drawn into wars with each other to steal more colonies from which to extract unimaginable wealth. Each major capitalist power seeks a world monopoly for its goods. Imperialist wars for markets and colonies will continue so long as the capitalist system exists. And the deadlier these wars are, the more clearly workers will see that they must take the economy into their hands if humanity is to survive. The day is fast approaching when these capitalist crises and imperialist wars will force us to choose whether we perish, or we overthrow the bourgeoisie to step over the threshold into socialism.

Later she continues on the power of the working class:

As the proletariat grows larger, industry is run by ever fewer capitalists. Most workers have never so much as glimpsed their employers. Modern production methods are making the gentlemen entrepreneurs' role in the factories increasingly irrelevant, and most are run now by foremen, managers and engineers. The less spiders there are, the easier to destroy their webs. If the bosses should all drop dead one fine day, the world would barely notice. Whereas when workers decide to strike, life comes to a stop, as happened in 1905, when strikers brought the autocracy to its knees.

But Cathy Porter shows that Kollontai was more than a polemicist. In fact she is a deeply thoughtful and original thinker. Her writings on sex and relationships were often too much even for the revolutionaries, as they saw them as a distraction. Though Kollontai saw them more in the context of winning women to the revolutionary movement by talking about the sort of future that they might have under a socialist society. This is a future where women have been liberated from the drudgery of life through the socialisation of child care and food preparation. Kollontai was attacked by some who thought that the "Bolsheviks would take away their children", but this is crude and far from Kollontai's real ideas. Two pieces in this collection illustrate this well, one an essay from 1913 "The New Woman". Porter explains the significance, "people's longing for more fulfilling sexual relationships could only be realised when they were free from the alienation born of capitalist property relations." The New Woman piece explores this by examining in detail the changing way that women were depicted in Russian literature and then contrasting this with the reality of working class life.

A second example is a short story Three Generations published in the aftermath of 1917. In it she depicts the contrasting experiences of two women from the revolution, a woman and her daughter, the latter of whom is enjoying multiple sexual encounters with different partners. Her mother is perplexed. Innovatively Kollontai places herself in the story, and the reader can see this both as a description of life after 1917 in a rapidly changing world and one were Kollontai is also working through the meaning of 1917 for working class women. It's a fascinating and thoughtful conclusion to a collection of essays that everyone interested in revolutionary thought should read. Cathy Porter's work in putting this together should be celebrated and I highly recommend the book.

Posted by Resolute Reader at 11:42 am