V.I. Lenin - The Agrarian Programme of Social-Democracy in the First Russian Revolution 1905-1907 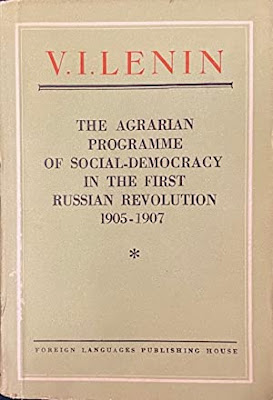 In the aftermath of the 1905 Russian Revolution revolutionary socialists engaged in major debates about the nature of the Revolution and its politics. A significant discussion took place around the nature of agrarian change. Lenin, the leader of the Bolsheviks, argued that because Social Democrats had the wrong position on the agrarian question they were unable to lead the peasant masses during the 1905 Revolution, and significantly undermined the whole movement. This short book is Lenin's exploration of the debates within Social Democracy (by which he means the broad revolutionary movement) and his polemical response. Unfortunately for the movement, all but one copy of the book was destroyed by the Tsarist censor and the text available today was only published in the aftermath of the Russian Revolution of 1917, because of the continued significance of agrarian discussions.

He is very clear on the importance of discussions about agrarian change. Arguing that there are two "streams" of agrarian evolution - that of Peasant and Landlord farming - Lenin says

The conflict of interests between the peasants and the landlords which runs like a scarlet thread through the whole history of Post-Reform Russia and constitutes the most important economic basis of our revolution, is a struggle for one or the other type of bourgeois agrarian evolution. Only by clearly understanding the difference between these two types and the bourgeois character of both, can we correctly explain the agrarian question in the Russian revolution and grasp the class significance of the various agrarian programmes put forward by the different parties.

The "pivot" Lenin argues is the "feudal latifundia", these will either eliminated in a revolutionary manner by peasant farmers or they will be gradually transformed into Junker estates".

In making his argument Lenin deploys an incredible array of arguments. He begins with a historical overview of the agrarian question, then summarises Marx's discussions on surplus value, rent and agriculture and, following this, critiques the multiple positions within the Russian political system, including his own comrades. In particularly he challenges leading Marxist intellectuals like Kautsky and Plekhanov, as well as a number of others whom he has less time for.

Given the urgency of the issue it might seem strange that Lenin (and indeed other Marxists) devoted such time and space to complex discussions around Marxist concepts like differential and absolute rent from land. The importance however lies in the implications of theoretical conclusions for revolutionary practice. Lenin chastises other social democrats for ignoring the Marxist concept of absolute rent (crudely the rent accrued as a result of monopoly ownership of land). Lenin points out that

The repudiation of absolute rent is the repudiation of the economic significance of private land ownership under capitalism. Whoever claims that only differential rent exists, inevitably arrives at the conclusion that it makes not the slightest different to the conditions of capitalist farming and of capitalist development whether the land belongs to the state or to private persons.

The significance of these debates lies in the wider discussions within the Marxist movement about the nature of revolution at the time in Russia. Almost everyone, Lenin included, believed that the coming Russian Revolution would be Bourgeois, and usher in capitalism. This, following a crude stagiest argument, would then lead to a future socialist revolution. Unlike most others though, Lenin though that the working class and peasantry needed to play a much more central and dynamic role in the revolution, pushing forward their own independent demands to strengthen the fight for socialism in the future.

For Lenin then, nationalisation of the land was not an abstract demand, but one that would both allow the peasantry and workers' movements to develop and to give them independence from the capitalist class.

The proletariat can and must support the militant bourgeoisie when the latter wages a really revolutionary struggle against feudalism. But it is not for the proletariat to support the bourgeoisie when the latter is becoming quiescent. If it is certain that a victorious bourgeois revolution in Russia is impossible without the nationalisation of the land, then it is still more certain that a subsequent turn towards the division of the land is impossible without a certain amount of “restoration”, without the peasantry (or rather, from the point of view of the presumed relations: farmers) turning towards counter revolution. The proletariat will uphold the revolutionary tradition against all such strivings and will not assist them.

Lenin's position then is not to ignore the two possible evolutionary routes for agrarian society under Russian capitalism. Instead he argues that the workers' movement cannot be "indifferent" to "one or other" outcomes:

In fighting for a favourable outcome of the revolution we must spread among the masses a very clear understanding of what keeping to the landlord path of agrarian evolution means, what incalculable hardships (arising not from capitalism, but from the inadequate development of capitalism) it has in store for all the toiling masses. On the other hand, we must also explain the petty-bourgeois nature of the peasant revolution, and the fallacy of placing any “socialist” hopes in it.

As with much of Lenin's writing, his work on the Agrarian Programme, must be understood in the context of the moment when it was written and the debates he was having inside the revolutionary socialist movement. But reading this book today is far more than a history lesson. Russia in 1907 was a tremendously unequal society, as Lenin himself showed, "ten and a half million peasant households in European Russia own 75,000,000 dessiatins (1.09 hectares) of land. Thirty thousand... landlords each own over 500 dessiatins - altogether 70,000,000 dessiatins."

Such rural inequalities remain in many parts of the world today, and Lenin's arguments about the relationship of the workers' movements and socialists to the "peasant revolution" remain crucially important for building revolutionary Marxist organisation in the 21st century. This book thus repays reading, especially given contemporary debates about agriculture and the environment.

Posted by Resolute Reader at 7:42 pm