Philip Kerr - The One from the Other 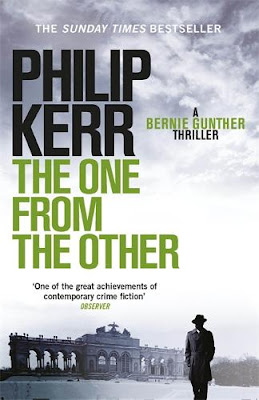 This is the first of the "later" Bernie Gunther novels, detective "noir" set in Germany from the 1930s onward. This one opens with Gunther running his wife's hotel on the outskirts of Dachau after the war. After his wife's death he sells up and returns to being a detective, this time in Munich. His cases are mostly finding missing persons - there are plenty of those in Germany after 1945. A beautiful woman hires Gunther to find her former husband, now a wanted Nazi war criminal, so that she can prove him dead in order to remarry. Gunther is drawn into a the circles protecting former Nazis trying to escape to South America, and finds himself in the midst of a complicated scheme involving a lot of money, murder and the CIA.

By the time of this novel Gunther is tired and broken. The death of his wife and his entrapment by nefarious characters seem to wear him down dramatically. By the end of the book there's precious little wisecracking, though there's still a lot of cynicism.

But the story is too convoluted and too unlikely. From the prologue, where Gunther finds himself in Palestine with Adolf Eichmann, onward, I found myself rolling my eyes at how unlikely it all seemed. Philip Marlowe's cases may have been moved forward on occasion by unlikely coincidences, but Gunther's life seems to be determined by some of the most unlikely of events ever. Kerr's attempts to link Gunther to just about every person in Nazi Germany are increasingly annoying, but this plot is simply too over the top to be able to suspend belief.

Posted by Resolute Reader at 8:46 pm