First on the Moon - A Voyage with Neil Armstrong, Michael Collins, Edwin Aldrin 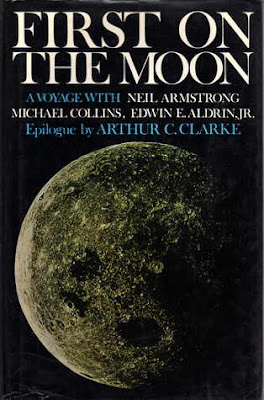 Rushed out in the aftermath of the Apollo 11 landing on the moon, this book is a detailed account of the flight and its background mostly written by Life journalists who were close to the astronauts and, in some cases, living with the astronaut families before and during the mission. For a book that clearly was intended to benefit from the intense interest in the mission its actually a surprisingly in-depth account. The book centres on the personalities of the astronauts, in turn telling their stories and those of their families. There's a strong emphasis on the themes that might be associated with America - the white-picket fence lives of the families, their faith and their part in recent US history - from the Korean War to the test pilots.

I was surprised to find myself rather interested in these aspects to the astronauts. It helped illuminate their post-Nasa careers, for instance. In the past I'd been surprised that none of the three Apollo 11 astronauts wanted to return to space after their return from the moon. It turns out that this was in no small part because they did not want to commit themselves to such an intense period of training again. But it was also because they wanted a normal family life. In fact the "normality" of family life shines through with several of the young children being utterly unimpressed with Daddy being on, or near, the moon. Instead they were more excited by pets, visiting friends or new toys. The astronauts themselves come across as highly trained and excelling at their jobs. I had not realised that Aldrin had been involved in pathbreaking university research in orbital mechanics.

But the book excels at the description of the mission itself. Large chunks are devoted to "quotes" from radio transmissions between the Apollo CSM and Houston. These are cleverly interspersed with the background information, which gives the sense of a count-down to the epic moment of the first moonwalk.  Further background to the colossal effort is given by shorter accounts about technical and engineering staff. While there is little acknowledgement of wider political and economic issues, there is a brief reference to one black employee, Herman Clark, of Grumman who was a quality control inspect for the Apollo 11 lunar module, who makes reference to the lack of racist attitudes among his staff, which he attributed to his willingness to stand up for his colleagues: "The people who work on that project, on the LM, take pride in it. The guys there are not there to fight a racial problem. If you've got a problem, take it out of here." This chimes with other material I've read from NASA in the 1960s - racism wasn't necessarily challenged - it was supposed to be taken outside. There's also a tantalising reference to a strike by maids at the accommodation provided for the astronauts.

The book makes clear the sheer scale of the Apollo enterprise. Kennedy and Nixon both fretted about the costs, though the authors argue that there was a much greater benefit to the US economy from the huge amount of money being used in development, research etc. There's also fairly standard material arguing that there would be enormous benefits to the world from further space exploration. It's hard now to imagine the impact landing on the moon had. In First on the Moon you get a real sense of the whole world watching enthralled, though there was at least some cynicism out there. After all the US government could spend billions on Armstrong's first step but housing and healthcare was lacking for the poorest in the world.

Nonetheless the book does demonstrate very well the achievements that humanity could rise to if the worlds' resources and labour was used in a positive way, unrestricted by the limits of capitalism. Which is why the epilogue by Arthur C. Clarke reads some hollow 50 years after Apollo 11. Clarke argues for an "outward urge" that sees a technological continuity from Apollo's first mission to bases on the moon, Mars and elsewhere. He imagines no budget cuts, no lack of political interest and no shortage of cash. In fact, the future for Clarke is very rosy. Few of his predictions turn out to be accurate - though he gives an interesting description of the internet, long before it became true. Most of the missions he talks about were chopped - including latter Apollo missions, which would have seemed shocking at the time of writing. Nixon wanted to squash Apollo 17 fearing it might go wrong during his election campaign, after budgets had already gone for Apollo 18 and onward. Clarke's essay is remarkable for his enthusiastic belief in abstract progress separated out from wider economic and political questions.

First on the Moon gives a real sense of the euphoria of early space exploration and the technological and scientific marvels of Apollo. I was also left with a sense of sadness. Apollo was a remarkable achievement - a monument to what humans can do. But the fact that fifty years later its not happened is not a failure of vision or science - its because capitalism had no need of these sorts of missions after the Space Race had been won. Imagine what we could do if we had a society that wasn't motivated by such interests? First on the Moon gives a glimpse of the wonder of space travel - future generations, likely in a much more rational society - will have to take us further.

Posted by Resolute Reader at 5:39 pm