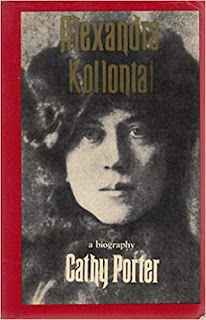 Alexandra Kollontai's life matches almost exactly the rise, and then fall of revolutionary Russia. She was born to a well-off, upper middle class Russian family, but her life was shaped by the socialist politics of the early twentieth century. Cathy Porter's detailed and readable biography traces Kollontai's life, from her early engagement in underground revolutionary politics, on to her role as a central committee member of the Bolsheviks. Along the way she traces the development of Marxist parties, the crisis of socialist politics during World War One and the Russian Revolution. Kollontai was an early opponent of Bolshevik politics in the early 1920s, eventually her critical engagement with the building of a revolutionary society was used against her with the rise of Stalin's bureaucracy. In fact it was only Kollontai's fame in Russia and abroad that saved her from the purges. She died in the 1950s, one of the few old-Bolsheviks to have survived so long, having made a decision to remain quiet for the sake of her own life.

Today Kollontai is remembered for her writings about the position of women under capitalism, and the potential for a socialist society to transform this. She was one of the first Marxists to explore how human sexuality might be transformed under a classless, equal society. Her articles and theories were often popular, if sometimes lacking a grounding in what was really happening. Both the right and left wing of the revolutionary movement seem to have on occasion dismissed her as idealistic.

Porter's book traces Kollontai's development as a Marxist as well as her growing concern with the position of women in Russia's backward economy. From early on, Kollontai fought for the Russian revolutionary movement to take work amongst women workers and peasants seriously. In this she was often derided or ignored as this was seen to be a distraction from the more important task of developing revolutionary politics and ideas. Kollontai also faced the sexism of the early socialist movement, and after her exile to Germany, the entrenched ideas of the German socialist parties.

One of the most interesting chapters in this biogrpahy is the section where Porter looks at Kollontai's experiences in Germany. A popular and passionate speaker, she toured the country speaking to crowds of workers, trying to win them to the German SPD. In this she was enormously successful, though the party's bureaucrats where often less sure of her arguments around the emancipation of women.

In early 1911 Kollontai spoke in the industrial town of Grossenhain; describing the aged Party secretary, she recounts:


His tone changed sharply when she enquired about women's activities. When women worked men suffered he said. 'The house becomes a pigsty, the children die... and what does a woman look like when she works in a factory? You expect love to survive when a man's wife looks like a witch?" A crowd of women gathered around her after the meeting and took her to the station. 'Silly old fool,' they said. 'We're stronger than he knows'.

Such attitudes certainly prevailed within the German Party and women like Kollontai fought hard to change them, by creating women's organisations and sections. Inside Russia underground socialist organisation made it even harder for women to organise. In addition the male dominated revolutionary organisation often saw incipient "feminism" within attempts to struggle for women's liberation. Kollontai herself was often accused of feminism, and not keeping to the party line, but in reality she and her comrades were fighting hard against the middle-class women's movement that saw all women, irrespective of class, being part of the same fight for suffrage.

Porter quotes Trotsky's "jaundiced" comments on Kollontai, "During the war she veered sharply to the left.... Her knowledge of foreign languages and her temperament made her a valuable agitator. Her theoretical views have always been somewhat confused however." Nonetheless, as the war lead to revolution, Kollontai became a leading member of Bolshevik organisation in Petrograd.

She was part of the Bolshevik central committee that agreed the insurrection in October 1917. Porter describes 1917 as being happiest of Kollontai's life. In the midst of revolution, Kollontai talents as a speaker and organiser came to the fore. She spoke to mass meetings and, was delegated to the Petrograd soviet to represent a unit of male soldiers. A perfect example of the way that class struggle begins to transform peoples ideas.

Readers who are inspired by the Russian Revolution, will find Porter's accounts of the period and Kollontai's involvement fascinating. Here are some brilliant accounts of mass meetings and debates within the working class. There are detailed accounts from Kollontai's own diaries of the pressures on the leading revolutionaries;


Trotsky had collapsed from fatigue the previous day; that afternoon, after three astounding days charged with an almost electrical tension, and after a particularly fraught argument with a Socialist Revolutionary, Alexandra was overcome by dizziness. She was prevented from falling by a Red Guard, who offered her a rouble for bread. She was grateful, but refused; but he insisted on taking her address, and later that evening crept into her flat, left some bread there for her, and crept out again before she could discover his name to thank him.

After the seizure of power, Kollontai was appointed the head of the Commissariat of Social Welfare. Her work was blocked by a strike of civil servants, but her struggles to attempt to help those in need, impoverished by war and economic chaos are central points to the book. Her attempts to create communal kitchens, orphanages and the like are met with hostility, both from representatives of the old order, such as priests, but also from workers themselves who often believed the Bolsheviks were out to "nationalise the family" and take children from their parents.

The years of economic collapse, famine, disease and civil war that followed the successful insurrection helped undermine the basis of Soviet Power. During this period argument raged about the way forward for the revolution. Always a free thinker, Kollontai was often in opposition to leading Bolsheviks and she was an early member of the Workers Opposition. Her thoughts and writings about the potential for sexual liberation flourished in this period, though again they were often at odds with other leading revolutionaries, who were more concerned with trying to drive forward attempts to stabilise the Russian economy and strengthen the basis for Soviet rule. Kollontai argued that women must be central to a developing economy;


Her chief hope therefore, was that women's continued involvement in production would have a dramatic effect on their consciousness and confidence, and would help to free them from the vestiges of fatalism and ignorance which so tenaciously clung to them from the past. Women's release from the private family was not only an essential precondition of their liberation; of equal importance in her opinion, was the fact that all the labour hours women spent on housework were unproductive and of no value to the revolution. It was only when women contributed these labour hours to social production in the factories that the material conditions for creating socialism could be said to exist.

Despite these confused ideas, which downplay the existing economic role of women, Kollontai was at the heart of Bolshevik attempts to try and dramatically transform the role of women's lives in the early Soviet state. Her speech at the Party congress in 1919 had led to a "flood of complaints" from women that their work was being undermined, leading to the establishment of the Zhenotdel. Much of Kollontai's work over the next few years was associated with this organisation. Zhenotdel took on many tasks, involving women in factory inspections, ensuring that pregnant women were adequately protected and taking up issues such as prostitution, venereal disease, education and child care.


The Zhenotdel delegate, with her red headscarf and shabby clothes was soon a familiar and popular figure in every village and town in Russia, as she trudged from house to house, often taking abandoned children into her own home, and when necessary, picking up a rifle and leaving for the front.

During the Civil War Kollontai travelled the length and breadth of the front on agit-trains, speaking to large and small crowds on station platforms and in cold halls. She rallied women to the revolution and to the war, helping in no small way to enable the Red Army to win.

But the rise of Stalin and the isolation of Russia further undermined Kollontai's ideas. As an old-Bolshevik, who had briefly joined the Menshevik party, she was particularly vulnerable and she was driven out of the Party leadership. Stalin used Kollontai in a diplomatic role, further leading to her isolation. Kollontai herself understood that she was threatened, returning in 1930 to Russia from Stockholm were she was a diplomat, she wrote "How can you oppose the apparatus? How can you fight, or defend yourself against injury? For my part, I've put my fight into a corner of my conscience and carry out as well as I can the policies dictated to me."

She even went so far as to write participles criticising old Bolsheviks Kamenev and Zinoviev who had been put to death by Stalin. 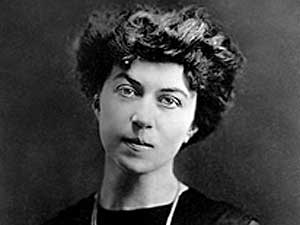 Kollontai's life was dedicated to the emancipation of working people. She was one of the few to try and grapple with what socialist transformation might mean for the relationships between people, freed from economic chains. She was not by any means always correct at particular points, and in places her ideas were often idealistic given the concrete situation. Nonetheless, her life spanned an incredible period of history, and her importance to the genuine revolutionary movement, is demonstrated by the way that her death barely warranted a mention in the pages of Pravda despite her years of work.

Cathy Porter's 1980 biography of Alexandra Kollontai is a must read for anyone trying to understand revolutionary history and the ideas at its heart. Her detailed accounts of life in exile, of the German movement, and the early days of Soviet power are fascinating. The exploration of Kollontai's ideas has rarely been done better and the book is a brilliant tribute to one of the socialist movement's most important figures.

Posted by Resolute Reader at 11:48 am