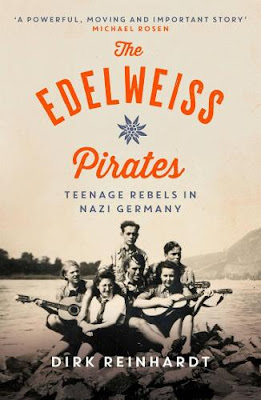 Picking up The Edelweiss Pirates in the bookshop I was fooled by the subtitle into thinking it was a work of non-fiction. I had always wanted to know more about this resistance movement, having heard their exciting name many years ago. Had I realised in the shop that this was a Young Adult novel I probably would not have purchased it - in which case I would have missed out on an exciting and evocative book.

Edelweiss Pirates was the name chosen by a diverse group of youngsters in western Germany during World War Two. As the author explains in a informative historical note at the end of the book, the Pirates did not necessarily begin as anti-Nazi resistors, but just young people who rejected authority and wanted, as young people do, to have freedom to be themselves. History hasn't been kind to the Pirates. Historians and politicians dismissed their anti-fascist credentials until recently, when the discovery of more records and research has shown how the youngsters organised as they found themselves increasingly in confrontation with the Nazi state.

The novel follows the discovery of an old man's diary by a youngster who befriends him. The diary tells the story of a group of Pirates in Ehrenfeld, near Cologne. Today these Edelweiss Pirates have been recognised officially as the brave resistance fighters that they were, and Reinhardt tells their story by conflating events into his account of a small group.

Josef Gerlach leaves the Hitler Youth and falls in with a group of rebellious youngsters he meets hanging around in he blacked out streets of wartime Germany. Quickly the Pirates are challenged by the Hitler Youth, whom they beat off in violent street fights. As the Pirates become increasingly involved in anti-fascist activity, the Nazi machine tries to curtail them. Josef and his friends have a few lucky escapes, but are eventually caught and badly tortured by the Gestapo. As the war continues, they refuse to join the army and conceal themselves in the ruins of their town. Now their resistance is tied up with the day to day struggle to stay alive.

Writing for a YA audience Reinhardt does well to include the wider story of Nazi Germany in the book. Depicting events through the eyes of a somewhat naive youngster means that we share Josef's shock at learning about the Holocaust and the reality of Nazi rule. However for younger readers that might not know the context there is an excellent introduction by Michael Rosen who explains events, and a glossary of terms at the back (alongside Reinhardt's historical note). It's also important to acknowledge Rachel Ward's brilliant translation as well.

This is an emotional book. The reality of the war, and Nazi Germany, mean that Reinhardt has to tell an unpleasant story. But that makes the book feel even more real, especially as we learn that much of it is based on historical events. The framing story - Josef as an old man, and the young narrator reading his diary - helps us think through how history and stories are told and remembered. I thoroughly enjoyed the book, and found it deeply moving and wish that when had been a youngster I'd had a chance to read it, as it helps dispel the "all Germans were Nazis" slur that was often thrown at me.

Kershaw - The End
Boll - And Where Were You, Adam?

Posted by Resolute Reader at 4:13 pm