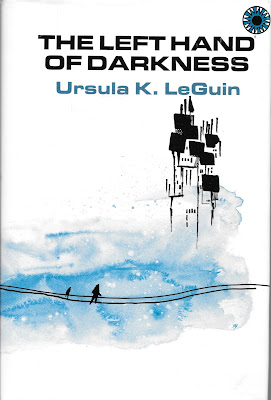 It has been many years since I read this classic by Ursula K. LeGuin. Many comrades recommended her work to me, usually The Dispossessed, with its juxtaposition of two worlds - one Communist, one Capitalist. However at the time I enjoyed The Left Hand of Darkness more, and rereading it today I am struck by how LeGuin's combination of story and world-building creates a wonderful experience.

First published in 1969 at the height of the Sexual Revolution of the 1960s, LeGuin's book plays around with concepts of gender, sex and family. The very different lives that she depicts here are placed in the context of a story of first contact, with the hero visiting the planet of Winter (known to its inhabitants as Gethen) as an envoy for a confederation of dozens of planets. Winter is, as the name suggests, almost permanently ice-bound. It's inhabitants have never discovered flight or many other technological marvels, and the Envoy describes it as being in a process of very gradual and slow change. Winter is dominated by two rival powers, both of whom are almost feudal in organistation. The envoy rapidly finds himself as a pawn in a planetary power struggle.

But it is the gender aspects to Winter that make the story refreshingly interesting. On Winter inhabitants are all of one gender - male. They enter a brief "female" period when they can have children. In addition to the envoy's trials in understanding the culture, he has also to navigate sexual and gender differences. Tellingly Winter's inhabitants often see "females" as the envoy describes them, as "perverts", because they are permanently in a state when sexual reproduction is possible. A good example LeGuin's ability to invert points of view to expose underlying hypocrisies.

Scattered through the novel are chapters that tell stories from the mythological past of Winter, and reports from earlier explorers and anthropologists. They serve to world-build but also make wider points, as one "scientific" report about the inhabitants of Winter explains,

When you meet a Gethenian you cannot and must not do what a bisexual naturally does, which is to cast him in the role of Man or Woman, while adopting towards him a corresponding role dependent on your expectations of the pattered or possible interactions between persons of the same or the opposite sex. Our entire patter of socio-sexual interaction is nonexistent here. They cannot play the game. They do not see one another as men or women. This is almost impossible for our imagination to accept. What is the first question we ask about a newborn baby?

These, and other, questions are thrown up into the air by LeGuin's story. That said the novel is framed around the envoy's story, which includes a gripping survival journey across the frozen lands of Winter. This is more than just a fictional exploration of gender or a fine science fiction tale, it's a great combination of both.

That said the book felt a little dated.In the 1960s and 1970s it provoked great debates about gender politics, and vestiges of that remain, as well as a cracking story. Today as the transgender liberation movement has exploded, SF&F often (though not frequently enough) explores gender and sexuality, and compared to some recent examples TLHOD felt a little old-fashioned. I was struck that despite depicting a future society, the worlds that LeGuin's hero visits from have made little break with the gender roles. Indeed when the envoy speaks about women to the male inhabitants of Winter he does so in misogynistic terms. As the "scientific report" quoted above suggests the envoy comes from a culture that is as shaped by sexual politics as Winter, and not in a positive way. In fact, to be honest, he comes from our society. Given LeGuin's radical politics I was surprised that she didn't use the opportunity to depict a more positive world.

Nonetheless this is a famous and clever take on the debates about gender and society. Reading it today I could see how it must have been enormously influential, and I suspect continues to do so today. I hope contemporary LGBT+ liberation movements continue to explore these themes in equally exciting ways.

Arkady & Boris Strugatsky - Hard to be a God

Posted by Resolute Reader at 8:43 am

The inhabitants of Winter are meant less to be male so much as having no fixed sex until their reproductive period - it is those that are permanently sexually receptive, like Genly, that are perverts. Le Guin was criticized for using he/him as the default and though she defended it initially she later changed her mind about it. A later short story, "Coming of Age in Karhide," pushes its themes of gender and sexuality further in a multitude of ways, not least by using she/her as the default pronouns. If The Left Hand of Darkness left you a little dissatisfied, then I really recommend "Coming of Age in Karhide," which you can find in her collection The Birthday of the World.